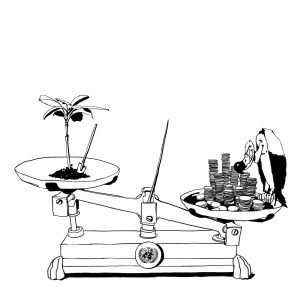 Robin Delobel Are the speeches of President Macron and the G20, advocating the massive cancellation of African debts and the change of system, credible?

Olivier De Schutter Even before the Covid pandemic crisis19 , the debt of developing countries was reaching record levels: for all 134 developing countries, public debt represented 193% of their total GDP. However, due to the massive capital flight that developing countries have experienced since the beginning of the crisis, the debt burden of these countries has further increased, as these debts are denominated in hard currencies (the US dollar, the euro or the yen), and the capital flight has led to a devaluation of the national currencies of the debtor countries. This makes debt cancellation even more urgent, especially for heavily indebted poor countries that are paying out considerable amounts to cope with the shock. In this context, the suspension of debt interest payments announced by the G20 remains highly insufficient. This certainly represents a breath of fresh air of about $25 billion, but it does not solve the problem of private creditors, notably the famous « vulture funds » who refuse to contribute to this solidarity, nor the problem of liquidity in poor countries. In addition to debt cancellation, the liquidity problem should be addressed by making available to developing countries special drawing rights of about $1,000 billion, as advocated by the United Nations Conference on Trade and Development.

You talk about transition to sustainable food systems, without wanting to play with words, should we not talk about breaking with this industrial food system that is harmful to humans, animals and nature?

The so-called « industrial » food system relies both on production techniques forming the so-called « green revolution » (irrigation, pesticides and synthetic fertilizers, mechanization and so-called high-yield industrial seeds) and on large agri-food actors who, at different links in the chain (storage and transport, processing and distribution), can achieve economies of scale and gains in efficiency by controlling logistics. This system has considerable impacts that can no longer be ignored: environmental consequences (loss of biodiversity and increase in greenhouse gas emissions), but also consequences on public health (the increase in the weight of processed food products in diets explaining the rise in overweight and obesity) and on the ability of small producers to survive in a highly competitive context, which has been extended on a global scale since the mid 1990s. The time has come to suggest credible alternatives, based on agro-ecology and food sovereignty — that is, not obviously on the fantasy of self-sufficiency for each territory, but on the idea that the choices in terms of agri-food systems should be defined by each country through democratic procedures, based on the idea of diversification within each territory — allowing each territory to produce more of what it consumes, and to consume more of what it produces.

We are making progress in this direction. Ten years ago, few of us were talking about agroecology. Today, more and more experts agree with this simple idea: we must move towards a more diversified agriculture, making low use of external inputs, and based on mixed farming in order to get the maximum benefit from nature’s cycles. It is common sense: agroecology respects these cycles and relies on the farm’s ability to identify the complementarities between different components of natural systems. This form of agriculture can be very productive per hectare. The problem is that it is more labor-intensive (because it is less easily mechanized than large monocultures) and is of less interest to the large buyers who dominate the food chains because these buyers prefer uniformity and large volumes, allowing for economies of scale. It is therefore necessary to strengthen support for agroecology, starting by correcting the price signals: it is not normal that the services it provides are not rewarded, while conventional agriculture is not asked to reflect in its prices the costs of the environmental and sanitary damage it causes to the community.

This transformation of agri-food systems must benefit the smallest farms and so-called « family » agriculture. The latter is better equipped to move towards diversified production at the plot level (through associated crops and frequent crop rotations), in accordance with the principles of agroecology, and to produce food crops that meet the nutritional needs of the local population. This implies supporting this form of agriculture, as well as local and regional markets, instead of placing all our hopes in the expansion of export markets and the development of long supply chains.

Faced with the balance of power in favor of multinationals, creditors and neoliberal policies, what role can the UN play in this crisis concerning extreme poverty and food shortages?

It is urgent to create coherence in global governance. Since the Havana Charter of 1948, which sought to establish an  » International Trade Organization « In the past, the United Nations system, which has integrated trade into the service of development and employment, has witnessed a kind of organized fragmentation of global governance: trade, environment, health, agriculture, employment, human rights, etc. These areas of international cooperation have been largely separated from one another, and are dealt with by different bodies according to sometimes conflicting logics. As a result, economic growth, stimulated by international trade and investment, was seen as the condition for everything else: growth first, then repairing environmental damage and spreading the fruits of growth through redistributive social policies. Today, we see that what is needed is to rethink our very model of growth, so that development integrates from the outset requirements — environment, health, social justice — which have until now been treated as secondary. We must urgently put the well-being of populations back at the center of all our policies: this objective, and not the increase in GDP and the extractivist type of growth that is its consequence, must become our compass.

Giving states the means to invest in the establishment of social protection floors is now the priority: 55% of the world’s population, about 4 billion people, have no social protection whatsoever, and they are 82% on the African continent, the least advanced in this area. However, tax avoidance and evasion strategies of multinational companies and the debt burden prevent poor countries from investing in social protection, and many countries are also afraid to raise wages because they see cheap labor as a competitive advantage in the globalized economy. These are countries whose comparative advantage is that their population remains poor: this is not sustainable. In the OECD countries themselves, tax competition is fierce, and governments are afraid to take on more debt by investing in public services and redistributive policies. We must break these vicious circles. This includes international tax cooperation requiring companies to pay taxes where they make their profits; international support for the development of social protection mechanisms in the South; and ensuring a decent minimum wage for all workers, including in the informal sector where more than two-thirds of workers in developing countries work.

Interview by Robin Delobel, May 2020