BECOME AWARE OF A POSSIBLE COLLAPSE 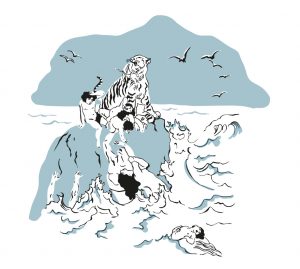 To grasp the magnitude of this notion of collapse, one must go through several steps. Awareness is gradual and usually irreversible…

The activity of a collapsologist is not easy. Canadian blogger Paul Chefurka knows all about it. Famous among the collapsniks community (the collapsologist bloggers of the English-speaking world), he threw in the towel last November, after more than a dozen years of unraveling the springs of what is hanging over our heads. Today, he simply wants to live his life, fully aware of the disasters, but without trying to analyze or share publicly the ins and outs of this « collapse clusterfuck ». He devoted himself to a more spiritual life. In addition to his remarkable talent as a teacher of rather complex subjects(1)Paul Chefurka is credited with his famous awareness scale. « When it comes to our understanding of the current global crisis, each of us seems to fit somewhere along a continuum of awareness that can be roughly divided into five stages »(2).

Step 1. Deep sleep.
The person does not seem to see a fundamental problem with the way we inhabit the world. If there are problems, they can be solved by following the rules in place. « People at this stage tend to live happily ever after, with occasional bursts of irritation during election periods or quarterly corporate earnings releases. »

Step 2. Awareness of a fundamental problem.
The person feels (and knows) that something is wrong in one of the areas of life: climate, population, peak oil, pollution, biodiversity, inequality, politics, migration, etc. This area gets his full attention (he becomes an ardent activist) but this makes him blind to all other areas.

Step 3. Awareness of many problems.
The person realizes that there is actually more than one fundamental problem and usually works to prioritize them according to their degree of urgency or importance. However, the recognition of this emerging complexity prevents him from adding more awareness because « adding new concerns would only dilute the effort to solve the ‘highest priority’ problem. »

Step 4. Awareness of the interconnections between the many issues.
The person realizes (with dread) that a solution in one area can make another area worse. The problems then take on a large-scale systemic dimension. A click takes place: it is no longer a « problem » that we face, but a predicament (an inextricable situation for which there are no solutions, but only paths to take to learn to live with it). « People who reach this stage tend to retreat into small circles of like-minded people to exchange ideas and deepen their understanding of what is going on. These circles are necessarily small, both because personal dialogue is essential to this depth of exploration and because there simply aren’t many people who have arrived at this level of understanding. »

Step 5. Awareness that the  » predicament  » encompasses all aspects of life.
There is no way out and the inertia of our world-system is far too great to foresee a quick positive change. There is something beyond her.  » For those who reach stage 5, there is a real risk that depression will set in. A spiritual path then opens up, because this future-that-is-improbable affects everything the person does, his thoughts, his relationships to others and his relationships to the biosphere. Everything has to be questioned, and this is not only exhausting, but it can cut the person off from his or her emotional surroundings, that is, from a stable and reassuring environment. very quickly psychologically unbearable. Unfortunately, there is no real turning back in awareness: I don’t think you can recover from taking the red pill, » says Chefurka. Maybe all that’s left to do is to grow up, until you become bigger than the pain.

As the ex-collapsologist notes, there are two ways to react to this unpleasant situation. Either one engages in an « outside » path: politics, transitional cities, building resilient communities, etc. or (but not exclusively) in an « inner », more spiritual way. This last option may seem surprising to us scientists (collapsologists are often researchers and engineers) but we must admit that this spiritual path provides great resources to weather the storm. Obviously, it allows the creation of meaning and connection, indispensable ingredients but particularly absent in our time.

The « inner » way is not an adherence to any religion! On the contrary.  » Most of the people I have met who have chosen an inner path have as little use for traditional religion as their counterparts on the outer path have for traditional politics. These are paths that radically challenge the ways our ancestors inhabited the world (in the outer and inner senses), and that have clearly led to the clusterfuck in which we are entangled.

Our journey, as well as that of Paul (and many others), confirms that collapsology requires not only a systemic vision of the world but also a sensitive vision. Emotions, spiritual awakening, deeper links with other humans and other living beings, connection with the long time, etc. All of this is part of the first aid kit that should be opened in case of a storm. And, it’s time, because this « inner transition » is long and tiring. Fortunately, more and more of us are getting involved in this way and mutual aid networks are being born and connected!