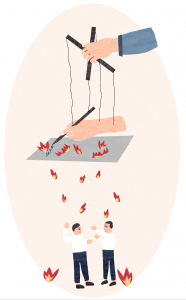 Praising the communicative pirouettes of the men of power («  Hats off to you! Juncker takes over », Le Soir, 13/11/2014) without dwelling on their participation in the theft they committed through some fiscal trickery; always expressing their deep ideas by attributing them to another (the new government for example: « Belgium is moving from a protective regime — considered by the new leaders as assistance — to a liberal organization, where social benefits are not abolished, but where they are no longer acquired: those who want to benefit from them must now demonstrate that they deserve them », 10/10/2014); indirectly acquiescing to their measure under the subtle compulsion of necessity and certainty (« Doing what is necessary (pensions, index jump, tax shift, competitiveness);« This government wants to be offensive. In any case, with the age of the pension, it shakes up certainties established since the Second World War « , 08/10/2014 ;  » If many reforms were necessary « …, 10/10/2014), or subtly giving them strategic advice, inviting them to be cautious in order to better pass the pill to the rabble (« If it wants to last, the Michel government had better act quickly, so that its structural reforms can take place without giving the impression that they are hitting « the people » first and foremost », 24/11/2014), the editorials of Beatrice Delvaux, at Le Soir since 1984, tell us a lot about what the daily is and who it serves.

However, what could pass for hasty interpretations on our part is confirmed by the analysis of the way the Belgian media handles moments of « crisis ». Always pretending to be neutral, the chief editorialist of Le Soir and her acolytes, an economist by training and a former trainee at the International Monetary Fund (three months in Washington during her final thesis at the Namur faculties), author of the preface to the book devoted to Albert Frère (Albert Frère, the son of the nail merchant, currently Belgium’s second largest fortune with 6.2 billion euros), lets loose in his editorial of October 22, 2015:« The death that makes you responsible ». This day, the media elites went wild following the death of a patient at the Hermalle clinic, blaming it on the FGTB’s blockades. As if the press was waiting for « the event », the one that will allow the expression of its class contempt, demonstrating the deep values that underlie the editorial choices of their daily pages. The editorial in the October 22 edition of Le Soir sets out the « red lines not to be crossed » and, sees in this event put on the front page (central title:  » Dead because of the FGTB’s barricades « , and complete subject of pages 2 and 3) a turning point in the practices of the FGTB: « This death and this complaint will henceforth weigh on the future trade union initiatives and the strategy of action and communication of the FGTB », says Madame Soleil who never says that she participates in the phenomenon she believes to describe.

In the choice of words, their arrangement, the selection of exergues, headlines, interviewees and their responses, the newspaper does more than describe a situation, even if it continues to want to be seen as a faithful reflection of reality.  » Dead because of the FGTB barricades?  » Let’s admit it for a moment. But then, how to explain the ardour to evoke this possible link of cause and effect (link of cause and effect more than suggested on the cover, indirectly affirmed in the title of pages 2–3:  » The wild blockade delays a vital help ») when it incriminates the union and the social actions, and its absence when it is a question of denouncing the employer violence and the deaths that cause indirectly, but certainly the privatizations, austerity, competitiveness…

Gradually, European countries are privatizing their health care in a phenomenon dictated by the European Commission and the IMF, which refuse budget deficits and whose investment in public health services is decreasing, to the benefit of the private sector. We are slowly moving towards an American-style model, where a patient’s admission to a hospital will be conditional on his or her solvency. How many people died because of this? How many headlines on the front page? And how many more deaths and illnesses are to come because of the Transatlantic Treaty? How many more people have died because of our consumerist society that plunders and exploits the countries of the « South »? No headline on the front page, the dominant news preferring to focus on the release of the iPhone 7 (and then the 8, 9, 10 …) rather than tell us about the working conditions in the factories of the multinational Foxconn(1). On March 22, the day of the Brussels attacks, the wallpapers of mainstream media sites were still filled with advertisements(2). Indecent? No, commercial.

Pretending to ask the question in order to insidiously provide their answer through the voice of the arbitrarily chosen interviewee, Le Soir excels in the art of expressing its ideas by attributing them to another:

Le Soir : « does the workers’ fed up with the Michel government’s measures authorize them to completely block several roads and motorways around Liège, at the risk of delaying or even stopping the movement of rescue and other vital care? » (22/10/15):

Philippe Olivier, medical director of the CHC private hospital group and president of Fratem (Regional Federation of Medical Telematics Associations): « It is impossible to imagine a traffic obstruction that would paralyze emergency services. The quality of care for the population is at stake, starting with emergency services ».

Will Le Soir also ask the latter what the privatization of health care is doing and will do to the death toll? The focus on the death attributed to the FGTB’s blockades that delayed the arrival of the surgeon avoids mentioning the reasons for the anger, feeding instead the lack of understanding of what is at stake and the reason for the struggles.

In France, the media lynching of Air France employees who responded to their boss’s illegitimate violence with legitimate rage reflects the role of the system’s watchdogs, the journalists, who accept sheep-like demonstrations but do not appreciate it when the unions do not « donot control their troops » (Le Soir, 23/10/2015). We should measure and promote the  » social dialogue  » ( It isespecially regrettable that, once again, a strike has tarnished the image of our country and demonstrated the non-existence of social dialogue in Belgium », May 26, Le Soir, by François Mathieu, deputy editor-in-chief) … at the risk of alienating the population and playing into the hands of the government: « Charles Michel says thank you(3)« headline Béatrice Delvaux on October 20 following the freeway blockades and train strikes. Certainly Beatrice « says thank you » too. Francis Van de Woestyne also thanks them, in his editorial of October 20, but more vehemently:  » the way in which the protests were ‘organized’ on Monday is truly scandalous (…) This hostage-taking reveals the need to create a minimum service (…) There are worse things. Irresponsible trade unionists have blocked several major roads near Liège, paralyzing all traffic around the city and all transit to Brussels or Germany. Thousands of people had to turn back or wait for hours. The fires that these agitators have lit have burnedThe highways have deteriorated significantly. The damage is estimated at several million euros. The road repair work in progress will be delayed for several weeks. Thanks guys, great job… » To come to the endless social dialogue to the advantage of the employers: « In Belgium, social consultation, one of the pillars of democratic life, regularly produces good agreements. It is through negotiation that social progress is made. Not by violence, the weapon of cowards ». It will not say anything about the institutional and employer violence… Thank you Francis, great job! The FEB will appreciate…

This reminds us of the interview of Xavier Mathieu, CGT-Continental union delegate, by David Pujadas on the France2 television news(4). The condescension of journalists is unparalleled when it comes to talking to people of the people and the working class, always perceiving violence in them, pretending to « understand their distress », but always asking them if « it doesn’t go too far ». These enemies of change have failed to grasp the distinction between those who cause tensions and those who react to them, preferring to avoid conflict, which is useful for the perpetuation of their interests. As Martin Luther King said: « The great obstacle to our movement comes from the « realists » who worship order more than justice and who prefer a negative peace, characterized by the absence of tension, to a positive peace, characterized by the exposure of conflicts. It must be made clear that we, who produce the direct actions, are not the ones who produce the tensions. We are content to unveil them. We bring them to light so that they can be recognized and treated(5) « .

The editocrats of our flat country certainly appreciate the realism of their French colleagues, who are used to doing the same: hiding the legitimate reasons behind the « outbursts ». Thus, following the demonstrations of December 2011 against the government agreement, when Beatrice Delvaux stated  » The strikes, understandable, will not change the reality and cruelty of this crisis « , she continued to prepare the ground and roll out the red carpet to the entrepreneurial forces. Still nothing to say about the « excesses » of the bosses. In December 1999, during the Seattle riots, the legitimate reasons for indignation were once again hidden behind « these chains of solidarity that should not be confused with the excesses of a few activists » where everyone is I do not agree that there is no alternative, that « the radical « no » to globalization is untenable in a world where the consumer takes actions every day that take companies beyond their borders », but above all that « the market remains the most efficient way of organizing economic life, especially because all the others have shown their limits ». Limits that they do not know when it comes to being the voice of the bosses.

Like David Pujadas who  » of the CGT delegate, Béatrice Delvaux says sheunderstands  » thethat the workers [qui] refuse measures that they consider unequal and therefore unacceptable is understandable and legitimate, but the unions must beware of creating the opposite of what they seek, serving the interests of the Michel government more than their own  » (20/10/2015). But aren’t they both just serving the right-wing governments by not understanding and explaining the legitimate revolt of the workers? Their game is to pit the « workers » against the « strikers », to unite « workers » and « bosses » and to discredit any hint of a struggle: « this umpteenth disruption in train traffic thus had enough to irritate commuters whose rail journey often resembles an obstaclecourse » (le Soir, 20/10/2015). They won’t tell us, however, about the obstacle course once the railroads are privatized… something that curiously enough, the editocrats don’t complain about.

In this world, the recriminations of the workers would thus resemble more for the media-industry a « union feeling » than a lived reality. What they are doing, in a subtle way, is nothing more than organizing the dissension of the people: one part that supports the strikes against the other that condemns them. And in doing so, Delvaux and his acolytes do not only transcribe with words a present reality, but they create it. It builds the split, pitting one against the other, with perseverance, and has done so for decades now.