Are you pangolins or P4? 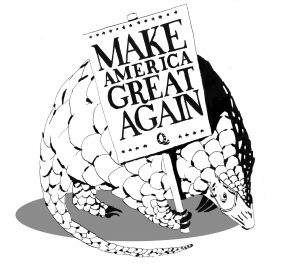 In politics, we have only friends and enemies. Some, friends or enemies, are there for a long time, others for the space of an action, of a movement. The interest of the pandemic is perhaps to sort out; it sheds light on the lack of ethical depth of some, who nevertheless occupy the media space to the point of saturating it. And then, the pandemic simplified the chessboard: either one adheres to the management of the pandemic, or one is a conspiracy theorist.

THE FANATICISM OF THE ONLY TRUTH

The continuation of the existing(1) is elevated to the rank of an ideology, but this ideology is not seen, for the simple reason that it is precisely « management » of the existing. It would therefore only be a matter of common sense, of obvious obligations such as  » Take measures so that as few people as possible die from covid-19 « . From such an objective, so consensual in its expression, managing the existing is, necessarily, validated. This short-sighted management by technocrats in turn gives rise to its convenient opponents, whom the media refer to as « conspiracists ». Indeed, the conspiracy thesis is born first of all from the way in which the State sinks into the absurdity of its day-to-day management, below its stated objective. From then on, it becomes impossible to believe that one can be so incoherent, if not to organize « something » underhand… A plot, then. This is why, in the face of the experts, the conspiracy experts are all trying to explain the birth of the pandemic: by revealing the way in which it appeared, they hope to highlight the lack of will of the States to treat the populations, and even their attempt to get rid of them. They are convinced that their truth is the only valid one. Now, as Karl Popper said,  » the doctrine which affirms the manifest character of truth — that it is visible to everyone as long as they want to see it — is the foundation of almost all forms of fanaticism(2) « . So we should not be surprised if the anti-social networks, in particular, induce a fanaticism that is totally depoliticized because it is based only on the opposition to the State’s lie — which is a bit weak to act as an emancipatory politics, and even as a politics at all(3).

On the part of the States, represented by the Heads of State and their ministers, it is only a question of managing the crisis, of taking advantage of it in the sense of Naomi Klein in this process that she calls the « crisis of the world ». shock strategy « : using the shock to modify the existing situation in a profound way, while trying to maintain more or less the same things that allow the continuation of this situation(4). This form of governance, although small in scope, is sufficient to keep the system afloat. For example, it is a question of allowing a selective, unethical pathway for the training of doctors and nurses to continue, or of being satisfied with the hospital system as it is, under-resourced and governed by directives that have nothing to do with public health.

Consequences: we find ourselves spectators and victims at the same time of a fight in which one of the adversaries, the State with its official experts, states its truths, which are « unchallengeable » in the sense that, if we contest them, we will have to deal with repression (from the fine for not respecting the curfew, to the expulsion of the order of doctors in France of the doctors who do not adhere to the official sanitary protocol). The state is all the more « right » because it now relies on experts. It doesn’t matter if they are « so-called » or even « fake » experts, because the only thing that matters here is that a very large part of the media only relay their speech. What triumphs now is only fanaticism. There is only one truth, either from the state or from a conspiracy. Either we are entirely on the side of a truth, that of the State or that of the conspirators, or we are finally on the other side of the fence, rejected by the State as well as by the conspirators: we are then the last quarter of those who want, from the political realities revealed by the pandemic, to continue to make politics, with in view the emancipation of the human race, and not the perpetuation of its alienation, by the media, by the States, by the anti-social networks, etc.

The sanitary theses of the States as well as the antitheses of the conspiracy theorists are in reality the two sides of the same syndrome, that of the decline, now undoubtedly irreversible, of the technicist civilization. Political reflection would be banished from the public space, which is itself now very restricted, or even almost non-existent because of curfews, house arrest, etc. From now on, it would only be possible to adhere to one or the other « pandemiological » and therefore non-political position, on pain of being rejected by all sides. It is impossible, for example, to debate the real origins of the pandemic, which is not due to a pangolin, a bat or a P4 laboratory, which are at best only its triggers: what made this crisis possible was well before the Wuhan episode. The cause of the pandemic comes down to our distance from the reality of the physiological existence of any living being: we eat poorly, we survive prosthetically with screens and food substitutes, we think little, we move little and we are physiologically and psychologically vulnerable. Our health care systems have been unraveled by decades of cost-cutting and bureaucracy, in the strongest sense: technocrats have power over the health care system, not the medical profession or pangolins.

State experts as well as conspiracy theorists think they are crowd leaders, whereas, if we talk politics, the omnipresence of conspiracy reveals in itself that crowds are only masses of atomized and easily manipulated individuals; it is indeed thanks to this characteristic that the State succeeds in having its anti-social policy endorsed without a blow. In a way, the possibility of conspiracy indicates that the state has failed. But on the other side, on the side of the conspirators, it is just as necessary to postulate that people are idiots, therefore manipulable and manipulated, since it is necessary to be so in order to believe in the State’s lies, which are so enormous… Thus, and whatever the position from which one considers this pandemic, the thesis of a conspiracy is credible! Conspiracy of the State and the laboratories, or conspiracy of the dark forces of the anti-social networks? No matter: fanaticism imposes itself and feeds conspiracy. Depoliticization triumphs. Political reflection is evacuated from the domain of our ex-democracies. It is up to us to re-inject large doses, not for pangolins but for elephants!

This civilization is now based only on Money and Power. The rest has been thrown overboard, culture, reflection or democracy, or else, like science, has been put at the exclusive service of domination. But there will be an « after ». It is up to us to prepare for this aftermath, in a political way, by refusing to be alienated in the technological mire.