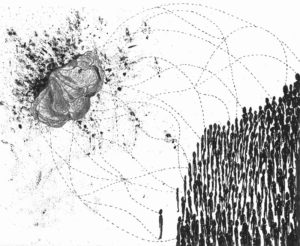 At this point in our journey, after 13 issues of Kairos, it is best, and certainly relevant, to perhaps clarify what we call « alternative, » what the term contains, implies, and what it is not for us.

« Tackling commonly accepted ideas is always a difficult undertaking. It becomes hopeless when these ideas have given rise to a multitude of bodies in charge of conveying them and deducing practices from them. So I have no illusions about my chances of being heard ».

Aren’t there many citizen proposals and individual initiatives that are marked, explicitly or not, with the seal of « different », of « alternative », when they are, voluntarily, not « different »? or not, only gentle companions of the system? Certainly, if these remain and remain actions that are often generous and altruistic, they are no less harmless to the established order. For if there is a fundamental characteristic of our liberal societies, it is to defuse any attack that would challenge its foundations and its existence. The system thus recovers to its advantage the criticisms and activities that oppose it, or risk doing so. Even before they exist, these activities are discouraged, sometimes explicitly because they do not fit into the normative mold, but also and above all because they cannot appeal to the springs of the system that does not want to see them come into being, and encourages those who perpetuate it.

However, there are signs to detect an activity that contains little danger to the sustainability of the system in place:

-When the activity attracts goodwill from all directions, generating financial support from all horizons;

-when it creates consensus, pleases almost everyone everyone, the nobleman as well as the commoner, the rentier as well(1) as the unemployed;

-when the mainstream media talks about it, is even enthusiastic about it, a sign that is not intrinsic to the activity but whose media « validation » offers almost certain proof that there is no danger;

-When « playing politics », in the broad sense of the term, is a haunting and becomes the recurring argument to stop any discussion that would dig a little too deep;

-when one refuses to question the contradictions that arise from the structure, the objective taking precedence;

-when any questioning of the business is seen as negative, optimism is the order of the day.

At the extreme, philanthropic works, which an informed citizen would never consider as an « alternative », are the most typical examples of these expedients of the system. All the biggest fortunes have their foundation: like the Lippens, with the foundation Paul, Suzanne and Renée Lippens, who « supports throughout the year innovative projects of organizations, groups or associations that work in favor of disadvantaged children in the Brussels area » ; or Albert Frère with the Charles Albert Frère, an association that has  » for the purpose of helping all persons suffering from a physical, mental or social handicap, and all persons or families who are victims of poverty ». Among the three sectors it favors are  » aid to the socially handicapped (sic) (2) and assistance to victims of poverty ». Soros, Gates, Warren Buffett, the founder of Facebook and others also have their foundations. The same people who took advantage of the largesse of a social state that they vilified, built up their indecent fortune and participated in the misery, are now presenting themselves as saviors of humanity by distributing part of the money that was not claimed from them through various tax cuts, tax gifts and tax havens. Paradoxically, they are therefore the private agents of a selective social redistribution. This « humanitarian » consensus - which has for its defense the fortress of morality: « one cannot criticize kindness » — as Serge Halimi underlines it, has the same utility as the ‘debate’ between journalists. They stir the wind to divert the storm ».and is obviously avidly relayed by the media concerned with maintaining « social peace ». where all believe themselves to be equal since they are consumers.

Large companies are no exception. For example, Total’s foundation will focus on  » marine biodiversity « , with the aim of « understanding the fragility of life and helping to protect it ». Or Areva « Energy is our future, let’s save it! the world leader in nuclear energy, which carries « general interest and solidarity projects in the countries where the group operates and develops its activities. The Foundation supports targeted and concrete actions that are sustainable and benefit children, women and students in particular ». Just that! We will therefore be able to witness these completely contradictory and absurd situations where we will see Total financially supporting associations that safeguard and protect nature; Coca-Cola fighting for water; or Monsanto « defining a series of objectives to work with farmers to make agriculture more sustainable »…

AND LOCAL AND « CITIZEN » STRUGGLES?

While it is clear that we cannot equate the small initiatives of goodwill that arise from the desire to do things differently with these strategic philanthropic structures set up by the big fortunes and multinationals, there are sometimes similarities between the two that speak volumes about the state of our societies. Because often the first, deploring not finding the necessary funds to launch or continue their activity, come to depend on the second, asking for a « occulting activity », like the philanthropic tree that hides the forest of disinterest for the other. The latter, strategically choosing « projects » that do not question what they are and how they have become, often lead to this situation of a paradox — which has almost no borders with cynicism, and therefore sometimes merrily merges with it — more surprising than usual: the subsidies that currently allow the activity — the safeguarding of nature for example — come in the last instance from sums reaped by other activities — the destruction of nature — that are fundamentally opposed to it. Albert Frère, Lippens and their acolytes, critics of the social state, closer to the banking world, the nobility and the captains of industry than to the people, stakeholders in neo-liberal think tanks, are they legitimate when they say they help the poor? And are we when we accept their bribe?

Whether we are an association that helps street youth or an experimental collective vegetable garden, are we not making a mistake when we accept the money they give us? For even if hoeing the earth and watering cauliflowers in a plot of land lent by a convent or a municipal administration is a healthy and decent activity, it does not in itself question the system that has destroyed solidarity and discouraged such initiatives most of the time. Why should we always claim a revolutionary ferment to what we do, or make explicit the overhang that the activity represents in front of the global system in which it is caught, some would say? Because it is tolerated by the authorities, it can be withdrawn at any time. While invested as an activity opposed to a dominant model, as a reappropriation, it is pointed out that maintaining it will imply, probably sooner or later, a form of struggle. In any case, in the latter case, we are ready! By this, we realize that our activity is never isolated, but taken in a whole. In contrast to the « struggles » that François Partant evoked:

« By focusing their thinking and action on one part of a whole (thus leaving all other parts in the shade), protest movements manage to bring together many people who do not have the same goal. They see this, as soon as they are forced to go beyond the stage of criticism to make their strategy clear. For example, when environmentalists want to intervene in the affairs of the city using existing institutions, they seek to develop a body of doctrine. Immediately, they divide into trends. And they avoid the fragmentation of their movement only by evading the questions that reveal their differences.(3).

The collective, focused on its limited objective (raising sheep, playing soccer with kids from poor neighborhoods, urban vegetable gardens, helping and promoting the safeguarding of ornamental trees in the neighborhood, saving batrachians crossing the road, militating against road accidents, etc.), becomes, in the absence of common goals and ideals that transcend the main activity(4) (including those of changing things radically, changing oneself, one’s relationship to nature and to others, and generalizing this to other places), a collection of disparate individuals who, faced with the imperative to organize promptly, will often not have the tools to do so. They will disperse as they joined, anxious, arguing all sorts of pretexts.

This alternative section is not, paradoxically, the place for self-congratulation tinged with optimistic nonsense that would make us forget that « everything is going wrong »; even if the celebration, the pleasure, the rediscovered joy, must be present, the criticism starts from the negative; starts from the recognition that something is not right Without this necessary recognition, we remain in an innocent and bland criticism which the system enjoys and even needs because it generates the illusion of an opposition. As Guy Debord evoked it, « such a way of criticizing, because it does not know the negative which is in the heart of its world, makes only to insist on the description of a kind of negative surplus which seems to him deplorably to encumber it on the surface, like an irrational parasitic proliferation « .(5) She is only « indignant goodwill. »

There is no balance to be had in criticism, the world being fundamentally unbalanced in favor of the minority that holds the capital and the means to enslave us, of the big media that make mass daily, of the destroyers of nature and life, and of the mass of individuals that we are, submissive in their being and their conscience. Criticism cannot therefore be balanced, it must strike at the adversary, as we ourselves do in our « systemic » habits, not being encumbered by the illusions of the few so-called benefits that a fundamentally harmful structure would conceal, because these are part of the negative of the whole: the positive is the negative in a fundamentally bad system. To advocate balance in criticism would therefore be like recognizing each other on equal terms. But this concern often says more about us than about the other, the balance being especially that which we want to maintain in ourselves.

In every alternative, there is therefore, according to us, an « other » discourse, a dimension that goes beyond what individuals have come together for, a will not to be satisfied with the activity that binds us, even if it is essential to us.

No doubt a desire for change.