All on the same boat 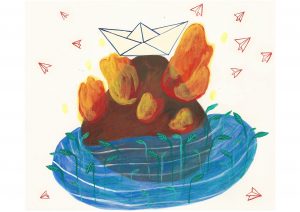 « …the state of the planet is a problem and it is everyone’s problem.
We have all contributed to it in different ways and it is taking us all down with it.(1)  »

Let’s continue our critique of the commonplaces of environmentalist thought with this one: in this decaying world, we would not be  » all on the same boat « , for two reasons. Firstly, because responsibilities are historically differentiated, with regard to the North, the main emitter of greenhouse gases, compared to the global South which, although innocent, is now paying the price. Secondly, because the resilience capacities would also be different, the North having the financial and material means to fight the plagues, but not the South. And yet… In the editorial of In Kairos n°43, I had already put forward the idea that the climate slate is shared more and more « equitably » between the center and the periphery(2)taking the example of Australia with its mega-fires which caused, among other things, the poisoning of the air for all residents of Sydney and Canberra. Another example in California: during the 2017 fires, the Getty Museum and billionaire Rupert Murdoch’s Bel-Air estate came close to going up in smoke. Randomness or mastery? Everyone knows that global warming does not care about social justice and strikes according to a logic alien to human societies. It is indisputable that the first capitalist countries (England, then the continent, followed by North America) have a total responsibility in the affair, and far from me the idea of clearing them: they must pay their climate debt. It is then tempting to take another conceptual step, which is however more difficult to establish. Rich countries, not only responsible for global ecological disasters, would also be preserved thanks to their financial, economic and technological resources. And if not totally preserved, at least able to face it effectively. This idea is frequently heard on the left, or from historian Jean-Baptiste Fressoz and journalist David Wallace-Wells. Is this certain? The Australian and Californian examples, as well as the recent coronavirus pandemic, are there to prove it: among the four countries that were the most infected, three are part of the G20, Italy, France and the United States, followed by Belgium and Spain, other developed nations in a Europe that was the most affected continent in the first instance. The political authorities of these rich, modern states failed to prevent the pandemic, and their health systems(3) had great difficulty in containing it(4). Hardly affected by the effects of the  » climate of mass destruction  » (mega-fires, tornadoes), the United States would find itself in the double bind of having to pay off its debt for the well-being of other nations and to save the furniture at home, a situation a priori inextricable, a double front impossible to hold(5). If they have to prioritize, who can believe that it will be paying off their climate debt? Responsibility and power no longer necessarily go hand in hand. On a logical level, it is not clear why the diachronic dimension — the historical responsibility of the West — should coincide with the synchronic dimension — the unequal capacities of countries to cope with disasters.

Methodologically, Marxist thought has strived to draw a line of demarcation everywhere between those who suffer and those who profit(6), against the backdrop of a largely unconscious fascination with the performance of the capitalist adversary(7). Prosperity for the bourgeois and adversity for the proletarians: if this observation was true in the 19th century and until the Second World War, continuing to support it can reify it to the point of blindness. Recall that with the advent of the mass consumer society in the 1950s, workers enjoyed welfare in turn(8). Many observers believe that capitalism has infinite resilience: the peak of fossil fuels and minerals, the decreasing yield of agricultural land, the disruption of the nitrogen and phosphorus cycles, the collapse of biodiversity, global pollution, not to mention climate change, none of this would be able to significantly and definitively undermine its power. Even in a post-apocalyptic world, he would survive. Let us introduce here a distinction between thespirit of capitalism and the globalized capitalist system . If this one can endure in the collective consciousness for a certain time(9), this one depends on such an interconnection of technical, economic and financial subsystems that a slightly lasting imbalance can induce serious dysfunctions. It is enough to note the impact of the coronavirus on the world economic activity and on the stock exchanges, whatever its real lethality was (between 0.3 and 1.5% of the infected individuals). The persistence of a capitalist ethos in the folds of the collapse and neoliberal globalization as we have known it for the last 4 decades are not the same thing. I personally would be happy to see this one go down, even if it means that this one will survive for a while. One can always wish for a clean slate, but it will not happen in reality. The Marxist geographer Andreas Malm does not escape the confusion. In his book The anthropocene versus history. Global warming in the age of capitalHe indicates that « capital is a specific process that unfolds as a universal appropriation of biophysical resources, because capital itself has a unique, unquenchable thirst for surplus value derived from human labor by means of material substrates(10) . This calls for two remarks. Firstly, it is not because a living organism or a system is greedy or unappeasable by nature that it is guaranteed to always have something to eat; allow me to use this analogy: it happens more and more often that polar bears die of hunger. Secondly, for this appropriation to take place under conditions of sufficient profitability, a whole chain of production and consumption must function correctly for a certain period of time, generally long. So far, this chain has held up fairly well over time, despite some bumps in the road (1929, 1939–45, 1973, 1979, 2008). But there is no guarantee that this will be the case after the 2020 election. What does it have in store for us? Let’s read Günther Anders again:  » [Car] Today, too, it is necessary to prevent people from misunderstanding the fact that the catastrophe has not yet taken place and from seeing it as proof of its real impossibility, from taking the step again for a never(11) « . In hindsight, the Covid-19 pandemic proves him right. Until February, who could have imagined it coming to us Europeans? Not even I, the enthusiast of enlightened catastrophism, who rather feared a nuclear accident in view of the dilapidated state of the Tihange 2 and Doel 3 reactors(12).

THE ANTHROPOCENE, A VALID MODEL

I would also like to defend the concept of the Anthropocene. If this one was invented (in 2000) by a technocrat supporter of geoengineering, the chemist Paul Crutzen — thus an individual who does not a priori arouse my sympathy -, it does not prevent its explanatory scope from being convincing.  » The Anthropocene manifests many capacities that belong to us as a genus and species(13) « Dominique Bourg objects to those who narrow the concept to « capitalocene » in order to stigmatize a particular system responsible for this drift, and who forget that Man has always exploited nature more or less aggressively in order to maintain his adaptive advantage over other species.  » Everything that mankind undertakes to improve its condition consists to a large extent in thwarting the order of nature ‚ » observed John Stuart Mill in the 19th century. For example, the megafauna of prehistoric times — with the famous woolly mammoth — was not exterminated by capitalists, but by distant generations ofhomo sapiens. Similarly, the territory of present-day Lebanon was, in ancient times, covered with cedar trees that the Phoenicians cut down en masse to build their naval fleet. Homo Sapiens seems to be a predator by nature, whatever the political and institutional framework of his community or society, although some cultures have managed to curb more or less effectively this inclination to predation. Capitalism has only reinforced and formalized this nature in a technical, economic and ideological system adapted to its own interests, which has dominated for more than two centuries. In turn, this system has reinforced the predatory tendency by giving it legitimacy through economics (especially free trade) and law (especially concerning property titles).

We are all on the same boat, a replica of the Titanic that hit the iceberg in 1972, at the time of the Meadows Report of the Club of Rome, and that is still sinking. Recognizing this is obviously not to be understood as a call to identify with the hyper-class and to fraternize with it, because it will do everything to take over the lifeboats. On the contrary, it will be a question of taking them away from him, without sharing them! The sociopathic hyper-rich are already organizing to reserve them for themselves, for example by buying huge properties in certain geographically well-located regions of the globe such as Chile, Patagonia, Hawaii and New Zealand, where they believe they can be safe for a long time. Patri Friedman is thinking of building artificial islands for himself and his libertarian friends. Some even imagine (and fear) that the oligarchs will manage to establish themselves on another planet or satellite of the terraformed solar system, leaving the masses to their sad fate on a ravaged Earth(14). But with what money and especially what material resources? With what workforce, trained in what universities and funded by what institutions? How long does it take? What industrial system, on an overheated and decaying planet, with a collapsing economy, would be able to produce the spaceships? We’ve watched too many James Bond movies, where the villains always magically have incredible technical resources! Even if some oligarchs manage to survive in space colonies(15), who among you, dear readers, would want to be part of the expedition to serve them? Not me, anyway! Some people, understanding that retreating to the best corners of the Earth or the cosmos is random, bet on overcoming the mortal human condition as soon as possible to adapt to the new state produced by the Anthropocene:  » There is no doubt that the Titanic on which we are all embarked is beginning to take on water from all sides. The ship of humanity is slowly sinking, but on the upper floors where the pleonexes live, the orchestra continues to play. They have given the mission to those who pilot it to push the machines to the limit, at the risk of a fatal overheating, so that they finally reach the zone where — thanks to the means considerably amassed — they will be able to monetize everything in order to escape to the life raft that must carry them to a new world, that of superhumanity(16) . Transhumanism will be reserved for them, despite the naive pleas of those of theirs who would like to democratize it (in the Anglo-Saxon world, James Hughes and David Pearce, in Europe, the French Miroslav Radman and Marc Roux, the Belgians Didier Cœurnelle and Corentin de Salle). But again, will they manage, after a transhumanist phase, to reach posthumanism before the biosphere, the sociosphere and the technosphere stall completely? It is doubtful. The human destiny will have the Earth as a frame. And this one will soon be no longer beautiful to see, whether one has poor or rich eyes.