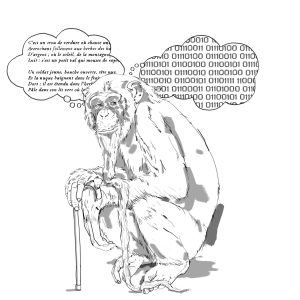 The general media deal quite regularly with artificial intelligence (AI) and transhumanism, in a tone either dithyrambic or gently critical, but rarely alarmist. What about it? The first one is based on the will to model the computer on the functioning of the brain — and not the other way around — to analyze the environment, to solve specific problems, to play chess or go, or to make decisions, with an infinitely greater speed and efficiency. This comparison is not entirely new, since the first « expert systems » that simulate human reasoning appeared in the 1960s. For example, the SHRDLU program in 1970 included and responded to instructions, such as moving objects on a rack. AI was taking its first steps and aroused a lot of enthusiasm, but it was already in crisis in the 1980s, because the results did not live up to expectations, among other things in the field of machine translation. Relatively ignored for 2 decades, it patiently waited for its time. In the 2010’s, AI has come back to life thanks to the increased computing power of computers, the availability of huge amounts of data collected by drilling (data mining) and converging NBIC technologies (nanotechnology, biotechnology, computer science, cognitive science) on which transhumanism is also based(1). The brain is now presented as a series of algorithms, in other words a reductionism, and even a nonsense! Where is the thought, which characterizes the human being? The humanist philosopher Francis Wolff reminds us that if  » thought does not exist without the brain, it is not in the brain, it is a relationship to the world(2) « .

Laurent Alexandre and Yuval Noah Harari are two supporters of AI, and more generally of the technophile fervor, but in a different style. Harari’s erudition and the thickness of his books may have impressed many of us. The international press has complacently relayed his studies. If there was nothing to report with Sapiens (Albin Michel, 2015), Homo Deus (2017) has on the other hand revealed the cards: its author is indeed transhumanist, but in a masked and falsely critical way, hence its ideological danger. Both are good clients of the media and politicians. Harari, received by Emmanuel Macron at the Élysée Palace in 2017, acts as a court intellectual who brushes the oligarchs aside, while endearing himself to the general public. As for Alexandre, to label him as an intellectual would be to do him too much honor; he is rather a showman who manages to give the change to the techno-beastly crowds, not to say techno-fanatic.

The philosopher Dominique Lestel argues that  » technologies that lead humans to detach themselves from nature can be considered autistic, schizophrenic and even paranoid(3) « . Our postmodern era is characterized by a twofold, apparently contradictory movement. On the one hand, the debate of ideas is polarized to the point of generating intolerant and even aggressive behaviors towards one’s opponents, ranging from insults to physical violence, including auto-da-fes; on the other hand, one wants to reconcile the opposites, one surfs on the paradoxes. In this case, we are trying to combine technological alienation and hyper-individualism. It would be a question of « robotizing » oneself, of « augmenting » oneself by means of prostheses and implants, in order to better disassociate oneself from the rest of one’s fellow human beings, who will become  » chimpanzees of the future « , according to the contemptuous expression of the cybernetician Kevin Warwick. Let’s note that owing nothing to others and everything to machines is a strange concept of independence! All the more so as these will remain controlled for a long time to come by « other » humans to whom the candidate-cyborgs will be subordinate.

» Doctor, give me a raise! « … the illusion is complete! Contemporary hyper-individualism relies heavily on hedonism and believes that convergent technologies represent the royal road to its deepening and widening, for example through chemical substances that would produce a permanent state of bliss or through an increase in life expectancy, presupposing that this would be enough to bring additional happiness and enjoyment. Where we find the conviction that more is always better: to spend its 243rd Christmas Eve, what a kick!

What relationship does transhumanism organize between man and matter? Many transhumanists deal with the body. Max More and his wife Natasha Vita-More cryonize him in order to « resuscitate » him later, when the expected progress of medicine will be able to cure him of diseases which are now incurable. Businessman Craig Venter and gerontologist Aubrey de Grey are working to extend life, if possible indefinitely — this is « prolongationism », and even « immortalism » — by considering the body as a meccano where defective parts can be changed, but without touching human nature. Still others, like Super Jaimie and TheMan Who Was Worth Three Billion(4), want to transform human nature by mixing flesh and bionic prostheses. These movements, which are in the majority, represent the « corporalist » and monist tendency. However, dualism creeps in among some transhumanists like Ray Kurzweil, chief engineer at Google, who gives priority to the spirit, seen as noble, which must be detached from a putrescible and disgusting body: we join there an old Gnostic idea. He hopes to digitize the contents of his brain (and his soul?) to transplant it on a hard disk and, in this way, reach a form of immortality, exported to distant galaxies. However, he should guess that the brain activity, neither the soul nor the mind, are, by definition, reducible to any material reality, cannot be transplanted into a silicon chip. Kurzweil is thus a thwarted spiritualist and a materialist in his own right. As Marie David and Cédric Sauviat point out,  » the idea of duplicating a spirit on a material support is a negation of the incarnation in a body, with its history, its environment, its limits(5) « . This leads us to the conclusion that transhumanists are generally not clear with their philosophical conceptions; all the more reason not to trust them, and even less to admire them! The human being has never escaped the matter. Let’s not forget that we are mammals, a little special, of course, but mammals nonetheless. Victims of the Promethean shame(6), most transhumanists hate our natural and animal roots. With synthetic biology, they want to go even further: program a computer to create new organisms that do not exist in nature, not being the product of evolution. However, as Michel Weber writes,  » the truth of our existence is found in the organic, not in the mechanical, and even less in the hybrid(7) « . Let us be happy to live in a body!

Transhumanism and AI represent the fulfillment of the technical project born with Francis Bacon in the 17th century. Phenomenologically speaking, modern technique has a totalizing aspect. Since the 19th century, it has not ceased to extend its empire; consequently, it is not surprising that it seeks to plug all the remaining gaps that could challenge its hegemony: psychological, poetic, spiritual, existential. It is constantly recalled that the technical fact has accompanied humanization since its beginnings, has allowed it, even. As Ortega y Gasset said in 1933, « there is no man without technique(8) « , it is understood. Nevertheless, Hans Jonas put forward the idea that basic needs were sufficient to provide an anthropological foundation. This does not imply an absence of technical tools, but the maintenance of these within limits adapted to man that historically the industrial revolution, by having made the « choice of fire »(9), has pulverized. The modern mind is reluctant to restrain Technology, because any increase in power is synonymous with progress in freedom. This demiurgic fury is taken seriously by a significant part of our contemporaries.

The habit of marveling at the innovations of technoscience is already old, the old reflexes are not easy to fight.  » Why is the contemplation of the machine so pleasurable?(10) », the philosopher Friedrich G. Jünger asked himself in 1949. Jünger in 1949. 70 years later, the essayist Bertrand Lacarelle observes that we have all more or less become  » collaborators of the technological occupation « . As long as we remain like mice fascinated and tetanized by the technical cobra, as long as we suffer from the Stockholm syndrome towards the hostage-taking technocrats, then life and living things are seriously threatened. We could collapse as a species, dragging almost all others down with us.  » The mechanical takes center stage, and with it, the brutal optimism accompanied by that arrogance of civilization, characteristic of the era of the course of technology, until the moment when man will be broken in his unthinking desire for power, thrown to the ground and forced to think again(11) « wrote Jünger. It’s time to break the spell!