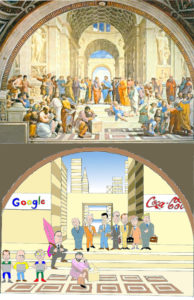 I will return, once again, to the old Heraclitus who, as you know, indicated part of the philosophical path by telling us that nothing in the universe was assured of stability, that everything passed as the water in the river flows; and similarly, men pass and their destiny with them. So it is with our works, our undertakings, the words we say or write; they pass their way, go from one consciousness to another and then get lost in the great disorder of the things of the world. Of course, those who intervene in the public debate, here or there, in such and such a way, are entitled to think and believe that what is written or said may be of a nature to fuel such and such a discussion, to allow old conceptions to be called into question, to allow the novelty of the ideas that arise to take over the adversity of the times. But, surely, the way is long from the ideas to the materiality of what they should be able to give birth to, we must be aware of it and admit that the struggle between the old and the new, between audacity and laziness is long and full of pitfalls of all kinds. To begin with, one would have to be blind not to see that the sinister shadow of a soft fascism - without drums and trumpets, nor torchlight marches, nor orator vociferating in front of hysterical crowds — runt of the unbridled hyper-liberalism.(1) In the face of which nothing and no one from what remains of « the left » seems to be overly moved; a fatal and deplorable drift of a workers’ movement from which only the memories of the old battles remain, of which only insubstantial relics have finally been made.

Now, other immense questions remain for a humanity itself divided into populations living, on the one hand, under the control of industrial and financial powers, subject for the most part to the whims of political elites and, on the other, in Africa and elsewhere in the Third World, enormous masses of They have toendure corrupt regimes and aggression from groups claiming a multitude of varieties of fierce and murderous Islamism. These questions, which are essentially posed to industrial societies and, by extension, to the rest of the planet, are related to the now unavoidable global warming and its corollary, the safeguarding of biodiversity. However, it is clear that, with a few rare exceptions, few heads of state and government seem willing to take these problems head-on or to alert all leaders and decision-makers to the need for joint action, which alone would make it possible to deal with a threat that concerns all living beings on a planet that is on its last legs. In the same way, it seems that the specters of a possible extinction of all species in a universal cataclysm do not prevent from sleeping the We can also understand that, for manypeople , more and more numerous, the end of the month issues are their first concerns.

And, finally, the glorious entrepreneurs and other princes of finance persevere in their delusions of power without worrying about the world they have appropriated and what it may become in the near future. Finally, we can see that the picture is very dark and the alerts coming from those who fight to bring a little light are lost in the immense spectacular maelstrom(2) of universal information.

Faced with this, the regular columnist of your beloved newspaper, suddenly-unless it’s more of a case of « little fire »-has his arms falling off, his brain and his conscience in disarray. And he doubts; he wonders if the game is still worth the candle. Especially since, here and there, some friends have occasionally told him that he repeats himself a lot, that the themes he develops end up being boring and redundant. So the moment has come when, as I am getting older (a little over three quarters of a century, after all!) I wonder if it would not be wise to leave the place to another pen, younger and more alert, and to devote myself to one of my favorite occupations: to do nothing but look, at the bottom of the garden, at the majestic trees of this small wood, in the grip of the wind, the sky and the beautiful clouds; and to daydream, languid and quiet, absent from the turmoil of the world, to which, in the end, and all things considered, I could do nothing more than to line up the words and the vague ideas that they inspired me. I did the best I could, with the meager weapons I had; I have no regrets, no remorse and I am simply moving on.