A little warm milk in the hot tea? 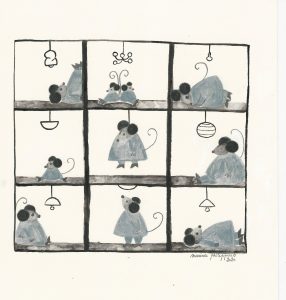 A text to get away from the burning news: the tempo of the information, very intense, deserves that Kairos also takes the time of the distance. David Tong proposes to take a little height (despite his meter 66) on an image, a quote, a concept… And to question its meaning.
This month, not surprisingly, he talks about the so-called « social distancing ».

Etymology is sometimes very useful. The term « distanciation » comes — not at all surprisingly — from the noun « distance », which in turn comes from the Latin dis (in opposite directions, in all directions) and stare (to stand, to be). The distance would thus be at the base of the fact of being either in different places, or of being of different natures. So much so that the verb means both « to be separate » and « to be different », sometimes in philosophical texts. Distance is therefore a state, a characteristic, not so well seen if we judge by the adjective « distant », which means that the other maintains space, symbolic or real, between him and us. It marks its difference, it prints its other state on the relation that one maintains with him. As the suffix « ‑tion » informs us, distancing consists of a dynamic process, of movement, which allows one to take space, to take the distance, and thus to progressively mark the distance and the comparative link with the other. Very well.

Who knows why, the term is coming back to bite us in the ass. However, in artistic terms, for example with Brecht, the unforgettable author of The Grandeur and Misery of the Third Reich or The Resistible Rise of Arturo Ui, the term is supposed to allow the spectator or the reader to take a critical distance: the other is different from me. I see him on stage, he sends me my own reflection through his reactions, his thoughts and his character and allows me to better position myself. By the same token, it implies a critical distance from oneself and from others(1). In sociological terms, distancing is a refusal to establish a link between different social classes(2). The term is therefore sufficient in itself.

THE RIGHT AND WRONG USE OF WORDS

Except that the term does not seem to mean much to our contemporaries, so much so that we have to resort to the ugly Anglicism social distancing, well attested(3). It is mechanically translated as « social distancing ». However, if we stick to the first meaning — distancing, to allow a better understanding of oneself — it does not make sense. The Cambridge definition states that this process is  » keeping away from others as much as possible, or keeping a certain distance from other people, with the objective of preventing a disease from spreading to many people . The term is therefore misunderstood: from strictly aesthetic or sociological, it becomes medical. Moreover, we can insist on the absurdity of the suffix « ‑ing » in English, which indicates a process, a movement. If I am far from someone, I don’t need to make an extra move!

The use of adjectives is also indicative of the impression and impact that, perhaps, the media and decision-makers, along with some trapped physicians(4), can cause. Social distancing is clearly irrelevant to coronavirus prevention. Nevertheless, through the other adjectives heard here and there, a shift in meaning, not necessarily positive, begins. If we take up the sociological meaning of distancing, namely the refusal to mix social classes, we hear the little music of confinement. I stay at home, I leave it for the bare necessities, and with the mask please, thank you. The poor in their low-income apartments or their insalubrious housing, the rich in their house in the city center or in the countryside in their villa. True social distancing is fully expressed in this climate, since no more mixing of populations and very few links can remain. It should be noted, however, that following the appalling figures of the first containment, travel to Belgium was authorized, but always with an extremely small number of people, and there was no hesitation in penalizing in France. It’s not sure that this will prevent meetings and reunions, which are both social and psychological necessities. Social distancing exists, in fact, and it is seen in the public space through hotels (shabby for people of little means, luxurious for the financially well-endowed), housing (HLM or duplex apartment on the heights of Nice or Brussels?), first and second class (train or plane), but also jobs (cubbyhole or nice office?) or even already at school (Jeannot, on the picket line, then out of class, then out of the stream). Thus, no more mixing and the whole herd is well kept in line. This social distancing has no relevance at all in the times we live in (some say troubled, I really wonder where they got that from). It makes no sense since it is about protecting the other as much as oneself.

Note that in French an expression already existed and was already respected: that of « vital space », this « circle » around us which is, with a big spoon, 1m. So we didn’t need a new term translated from English. This social distancing (or distance, for those to whom words with too many letters cause ulcers) should, some object, be called « physical » or « sanitary ». The two meanings do not make much more sense but have the advantage of not having a moral vision. Still… health distance would imply that the distance that separates us from someone can be a guarantee of health and good physical condition. Hello confidence! Especially if we add to this the plethora of barrier gestures which, in some school places, see the piling up of several posters, the most formidable being undoubtedly the one on hand washing… Let’s ask ourselves the question: does this make the population responsible for health and well-being issues or, on the contrary, does it cause a feeling of oppression and anxiety?

DOWN WITH DISTANCING, LONG LIVE CONSCIENTIZATION!

Since it is necessary to conclude these reflections tinged with lukewarm milk in this burning actuality, it would undoubtedly be opportune, instead of making the young, the outgoing, the workers, the tourists, the tactile, the feverish of human passions feel guilty, instead of infantilizing them with almost personalized and shamefully moralizing posters, it would be more than time to promote the conscientization of each and everyone on their place in the city, in the world, in the universe. The whole problem comes from there: morally, the current situation is purely anxiety-provoking. I was close to a guy with a cough? I approached a woman who had the mask down below her nose? I walked on the same sidewalk as a child without a mask who blew his nose two steps away from me? Should I distance myself from it? No. Should I distance myself from it? No more. Should I feel responsible for what happens to me as much as for what happens to others? Perhaps. Rather than a logic of action-sanction-repression, rather than a misuse of the appropriate vocabulary, it would be more than ever time to let the population be aware of and responsible for what it says, does and provokes.

In other words, this concept of social distancing will only make sense if it is conceived in the aesthetic sense of the term: to improve oneself by seeing oneself through the prism of the other, with a critical eye, in a magnificent perspective: that of making everyone’s life beautiful… And not just one’s own.