5G: the Brussels government in climate and health denial 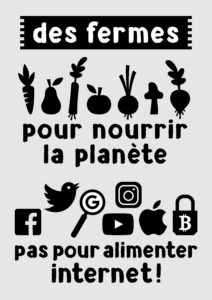 At the end of July 2021, the Brussels government has agreed to raise the limit of protection against RF-EMF (radio frequency electromagnetic fields) from 6 V/m (0.1 W/m2)(1) at 14.5 V/m (0.56 W/m2) that is to say a multiplication by more than 5 of the impact that any inhabitant of the Region can undergo due to cell phone antennas and others. In doing so, it also opens the door to the deployment of 5G, while evacuating the deleterious consequences of this deployment, both in terms of public health and in terms of increased consumption of energy and non-renewable resources, and therefore GHG (greenhouse gas) emissions and aggravation of global warming.

The IPCC, in its 6th report published on August 9(2)once again sounds the alarm:  » Human influence has unequivocally warmed the atmosphere, the ocean and the land. Each of the last four decades has been successively warmer than any decade since 1850. The concentration of CO₂ (carbon dioxide) in the atmosphere exceeds 410 ppm, a level not seen for two million years(3) « .

Temperatures will continue to rise and even faster: without radical measures to reduce CO₂ (carbon dioxide) and methane, the 1.5°C warming compared to the pre-industrial era will be reached almost 10 years earlier than expected, i.e. by 2030, while knowing that a 2°C rise in the global average temperature would be apocalyptic and that the current commitments to reduce greenhouse gas emissions will lead us to a +3 degree trajectory before the end of the century. Climate change « is already producing many climate extremes in every region of the world ‚ » such as extreme heat waves, intense rainfall and flooding, droughts and hurricanes. In the next few years, our corner of Europe, where we largely underestimate our vulnerability to global warming, will experience more hot days at over 35°C, more drought in summer and more concentrated rainfall, especially in winter, and therefore more catastrophic and deadly floods, as we have just experienced in Belgium and Germany. The other regions of the world will not be left out, as shown by the recent succession of extreme weather events: violent rainfall followed by flooding in Moscow at the end of June, in India and China at the end of July, in Afghanistan, Nigeria, Panama, etc. mega-fires in Siberia (more than 10 million hectares reduced to ashes) and North America, but also in Greece (more than 100,000 hectares destroyed) and Turkey; record temperatures of more than 45°C in western Canada and India; record drought and water shortages in Iran, Angola, the United States and elsewhere. No one will be surprised that July was the warmest month (+ 1.54°C) since measurements began (142 years)(4).

Could it be that government members have not yet understood the relationship between energy consumption, greenhouse gas production and global warming, that there can be no radical reduction in our greenhouse gas emissions without an equivalent reduction in our energy consumption? Are they unaware that wireless data transmission is energy inefficient compared to fiber optic transmission, which should be the only technology promoted? Wouldn’t they know that the energy consumption associated with 5G deployment will result in a 2% increase in the country’s annual electricity consumption, to which must be added an even greater amount of energy for infrastructure and equipment?(5) Wouldn’t they have read the High Climate Council(6) that implementing 5G could equal nearly one percent of all our GHG emissions today? Finally, don’t they know that in order to stick to the scenario of limiting warming to 2°C, a lesser evil that is nevertheless extremely painful, we must reduce our GHG emissions by 2% per year, every year until 2050?

This government has apparently not yet realized that any new project should be screened for climate impact, biodiversity and sustainability. Either he is not concerned at all about global warming and the preservation of the common good, or he is crassly ignorant, unworthy of those who are in charge of running a country.

From a health point of view, by endorsing this increase in the protection standard, the Brussels government is pursuing the same laissez-faire policy that has been in place for the past ten years: in 2007, following the opinion of the Superior Council of Health, the limit was set at 3 V/m (0.024 W/m2), with the intention of reducing it afterwards, while the operators adapt. The opposite happened in 2013 when the limit was multiplied by 4 and increased to 6 V/m (0.1 W/m2), for the benefit of 4G and operators. Now, compared to the 2007 standard, the government is proposing to increase the limit by more than 20 times.

This does not prevent the Minister of the Environment, Alain Maron, Ecolo (sic), from rejoicing (« Satisfied and optimistic politicians », headlined the newspaper La Libre of July 23, 2021), relying on the opinion of the deliberative commission, this process set up to give the illusion to 45 selected citizens that they could weigh in on political decisions when the only objective was to use them to endorse the deployment of 5G(7) :  » I have argued that 5G requires a calm debate with the public. I am pleased that this debate was able to take place in the deliberative commission, which brought together both citizens and politicians. It is clear from these recommendations that there is a desire to benefit from 5G while maintaining a protective standard and a framework for environmental consequences in terms of energy and waste « . Beyond all turpitude, the minister-president Rudi Vervoort (PS) is making a bidding war by declaring:  » And this, without compromising on the necessary protection of our fellow citizens, nor on that of the environment « .(8).

Let us recall here once again the limits recommended by independent scientific experts: the authors of the BioInitiative report(9) recommend a limit of about 5 μW/m2 (microwatt/m2 or 0.04 V/m) for the cumulative exposure of RF waves outside homes. The European Academy of Environmental Medicine (EUROPAEM) recommends 100 μW/m2 (0.2 V/m), but 10 times less during sleep and 100 times less for children (1 μW/m2, or 0.02 V/m). Thus, a limit of 100,000 to 500,000 times less than the one that Alain Maron will submit to the vote of the Brussels Parliament soon. It may seem low, but it is still a billion times higher than the intensity of natural EMF-RF(10). Let’s also remember that about 5% of the population already suffers from electrohypersensitivity syndrome due to electromagnetic pollution and that this percentage and the suffering of these people will only increase with the increase of the protection limit.

In September or October, when the law reducing the protection of citizens against EMF-RF and going in the exact opposite direction of what should be done to mitigate global warming will be submitted to the Parliament, will we see a salutary leap of faith from the Brussels MPs?