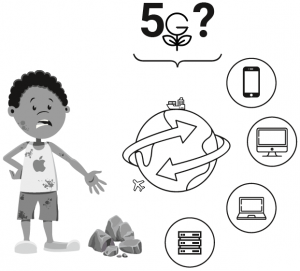 At the time of the climate demonstrations and the parties of all sides seem to agree, in the speeches, on a reduction of greenhouse gas emissions, the decisions taken by the politicians rather indicate a mad race towards always more growth, in particular technological. While some dare to believe in the ecological potential of 5G, it is in fact proving to be an anti-ecological abyss through the technological surge it brings.

WHAT KIND OF IMMATERIAL ARE WE TALKING ABOUT?

There is nothing virtual or immaterial about digital. It requires a whole infrastructure containing, among other things, terrestrial and submarine copper cables, gigantic data centers, wifi terminals (3G consumes 15 times more energy than wifi, 23 times more for 4G)… Each technology has its share of environmental disasters. The extraction of a few dozen rare metals requires the use of fossil fuels, the waste of huge quantities of water, the destruction of natural areas and the dumping of chemicals, not to mention the health and sociological damage to local populations. Digital technology is becoming the heart of the ecological catastrophe.  » Behind digital is extractivism and the revival of the global mining industry. In addition to traditional metals, whose exploitation is redoubled, new materials and rare earths, lithium, tungsten, germanium, etc., must be extracted on a massive and exponential scale. This extractive fever is causing a chain of ecological disasters that are occurring mainly far from consumers in the North.(1) « .

While the environmental impact of ICT(2) seems to be well known in environmentalist and activist circles, the propaganda of Green by IT, the « responsible » use of digital technology for « ecological » purposes, persists: optimization by digital tools and services would be factors of efficiency and sobriety. The ecological transition, as seen by the powers that be (state and industry), turns out to be an operation of greenwashing, making a few adjustments here and there, and externalizing more and more of the ecological costs of technology, made invisible by the relocation of industrial production (extraction, pollution, waste). This technological surge is done with contempt for the people, their health, the commons.

In Peru, the government is doing everything in its power to favor the multinational copper mining companies, while the population suffers from water shortages and the country is among those, along with Mexico and Chile, with the most mining conflicts. The rise of ICTs explains, according to Apoli Bertrand Kameni(3),  » the outbreak, frequency and continuation of political and armed conflicts in Africa  » over the past 30 years. The extraction of tantalum, germanium and cobalt in the Democratic Republic of the Congo is not the only reason for the conflicts that are taking place in the former Belgian colony.

In 2020, digital technologies will account for more than 4% of the greenhouse gas emissions responsible for global warming. That’s twice as many as in 2007. This pollution comes from the operation of the Internet (data transport and storage, manufacturing and maintenance of the network infrastructure) and from the manufacturing of our computer equipment. The extraction of the minerals at the base of digital equipment and connected objects is destroying more and more every day entire ecosystems and the living conditions of the communities that live near the mining sites. The Internet, seen as a public good by some political leaders, is booming for uses that are far from essential. While video streaming represents 60% of data flows, the promises of 5G, far from being immaterial and therefore without impact, are leading us into an era of everything connected, concerning vehicles, watches, street furniture, surveillance cameras, but also livestock (when will human livestock?). This is already the case in some companies, and here too Covid-19 allows for certain applications that the worst repressive regimes have not even thought of.

Beyond the capitalism that pushes us to consumption, the ideology of innovation for innovation’s sake is promoted from morning to night by industrialists, the media and the political class. We need to move to the 5G network  » because we can « . We don’t know what for, but we definitely need it. For which uses and for which purposes, the question seems impossible to consider. To learn more about world affairs, reading the business media is very informative. The vaguely left-wing media is often one war behind, and when it comes to technology, industry is often several steps ahead. Just read, for example, this article fromUsine digitale :  » Covid-19: 5G rollout struggling in Europe, China and US ahead of schedule. Telecom experts are sounding the alarm about the significant backlog of 5G deployments in European states. While some decided to postpone the allocation of frequencies for better days, China and the United States continued to install infrastructure during the Covid-19 pandemic. This will support the recovery of their respective economies after the health crisis(4) « .

On the side of the alternative media(5), the confusion dominates:  » 5G crystallizes many of the fears associated with digital. Technology promises hyper-connectivity. It is also sold as a way to absorb the very strong growth of data, email, video, etc. traffic. However, many voices are beginning to speak out against this increase in traffic and are instead advocating digital sobriety, which is better suited to the ecological transition(6). « This is the conclusion of a trendy media article in the style of the young and trendy ecologists. This conclusion could also be found in a generalist media because the famous ecological transition, towards which everyone would move hand in hand — industrialists, politicians and wise citizens -, turns out to be the unbeatable horizon, from the extreme left to the extreme right. However, this transition, which mixes climate, digital and ecology, proves to be completely complementary to the intrusive technologies and the nuisances they cause.  » It worries, but are we right to hate 5G?  » The title of the article alone sums up the content of the text. To make the arguments in favor of 5G serious, then to discredit those of the opponents and to finish with a conclusion that would suggest a criticism.

Beyond the multiple environmental nuisances — the « alternative » movements often forget this — ecology also consists in the search for autonomy. However, the shift we are witnessing in the period of the shock strategy allowed by the Covid-19 health crisis leads straight to more repression, population control and management through technological tools. What the capitalists dreamed of, the Covid-19 made possible. The collective Écran total and Ecologistas en Accion(7), noted in a common text, this global crisis raises the question of  » the dependence of people on an industrial supply system that is devastating the world and weakening our ability to concretely oppose social injustices. It is important to understand that computerization goes against these necessary empowerments: the digital system has become the keystone of big industry, of state bureaucracies, of all the administrative processes of our lives that obey the laws of profit and power.  »