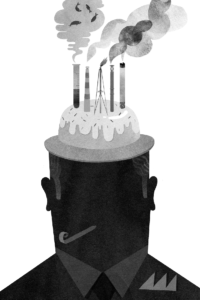 The best writers would probably have found it difficult to imagine a story as twisted and complicated as « Dalligate ».(1)This is a soap opera with many twists and turns, whose dark areas have still not been fully clarified one year after the facts. A commissioner forced to resign, accusations of bribes of 60 million euros, a secret report leaked drop by drop, tobacco lobbyists and unscrupulous intermediaries against the backdrop of debates on legislation on tobacco products with serious consequences for public health… This case has highlighted the weaknesses of the European Union’s decision-making process, its lack of transparency and the need for higher ethical standards for lobbyists and commissioners.

At the time, the scandal put the European Commission under pressure, but a year later, almost nothing has changed to prevent a similar case from happening again. However, there is an instrument that could prevent such cases: the Lobbying Transparency Register, listing EU lobbies, their employees, clients and activities, which is currently being revised. This potentially important tool for shedding light on the murky world of lobbying in Brussels has so far been largely useless: registration is voluntary and the information it contains is far from reliable(2). The Commission and the European Parliament have the opportunity to improve things in the coming weeks… if they take the review of the register seriously.

For the time being, the fog surrounding lobbying and its professionals is not clearing and, during the discussions in Parliament about the new tobacco legislation that was already at the center of the « Dalligate » scandal, we learned a little more about the practices of one of the main protagonists of this case: the cigarette manufacturer Philip Morris. Thanks to confidential internal documents leaked to the press(3)In the course of the meeting, we were able to see the extent and level of lobbying practiced by this multinational nicotine: systematically filing MEPs according to their positions on the subject with collection of confidential information on their networks; systematically filing the positions of Member States; systematically filing the positions of the various departments of the Commission; perfect visibility on the legislative calendar … All this information attests to the excellence of the information collected and, above all, to the privileged access to the highest political and administrative levels that this company has: at least 257 of the 766 European elected officials have been met by the firm’s lobbyists, some of them up to five times. But these documents also showed how Philip Morris’s Transparency Registry statement did not reflect the content of its actual activities, vastly understating them(4) (CEO filed a complaint against the company for this with the secretariat of the register).

It is that all these efforts of the tobacco lobby have not been fruitless. The European Parliament approved a version of the directive that was watered down from the Commission’s proposal (which included, for example, a ban on « slim » cigarettes and menthol cigarettes, both of which were not retained). This is just one example of successful industrial lobbying. Recently, another equally philanthropic lobby has managed to protect its activity: financial speculation on commodities — including basic necessities such as grains, whose prices are now speculated through derivatives. The new directive called MiFID II was supposed to ensure the end of this kind of speculation, but the lobbyists of the financial industry have managed to introduce in the text lines that make possible the continuation of these practices. Their terrible consequences will hit, as always, the world’s poorest.

Doors still open to speculation, weak regulations… What have we learned after the financial crisis and the economic crisis that followed? No more than that, obviously. Five years after the collapse of Lehman Brothers, the public bailout of the banks and the worst economic crisis in decades, the promises made at that time to regulate the financial sector seem to have been largely forgotten. Let us judge: European banks do not have enough capital to guarantee their activities, the derivatives markets continue to grow and few toxic products have been banned. Again, the European Union does not seem to have learned from the crisis, and it is obvious that the victory of the financial lobby is one of the reasons for this failure.

Over the next few weeks, much of the world’s attention will be focused on the climate change summit in Warsaw. The polluting industries that emit a lot of CO2 (automobile, oil, gas, chemical, energy production…) will all be represented there and will do their best to influence the possible decisions that would be taken. Will their presence be supervised and controlled? Will the countries targeted by their pressure be able to resist it? Will they have learned anything from previous editions, which were largely torpedoed by certain economic and national interests? This is to be seen. But time is running out: at the beginning of October, a study published in the scientific journal Nature(5) explained that from about 2047 onwards, average temperatures in Western Europe would be higher than the warmth records of the period 1860–2005 in the absence of significant reductions in greenhouse gas emissions (the phenomenon will begin much earlier in equatorial regions, from the years 2020–2025).

We need solutions. Quickly. And it is not economic interests blinded by the extreme short term that will contribute to this.