Yes, but no. My cell phone, but no antennas 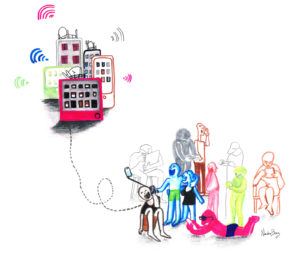 Back from vacation I find a « Wiener without antennas » letter on the table. A meeting is being held tonight in the neighborhood. A little tired, but mostly afraid to hear the endless « yes, but no…« I decided to go anyway. It was inspiring.

The small room rented for the occasion is half full, about thirty people are waiting for the speaker of the day to take the floor. Time to order a beer from the bar at the back of the room and it begins. The latter, former IBGE, tells us that an environmental permit has already been granted for the installation of 3 new antennas and 12 transmitters in a residential area. The application for planning permission is in progress. The speaker, having worked on electromagnetic waves in a university, knows well the harmful effects of antennas, for ourselves… and for others.

Proximus is the promoter of the project: there is money at stake, as the building where the company wants to install its antennas is located in a suitable area and at a suitable height, allowing to increase the coverage. Moreover, the roof of the house seems to be the last possible suitable place, as other buildings have previously rejected the telecom operator’s offer. The fight is therefore all the more important for the one who « brings us all together ».

The other protagonists in the case, the owners of the building, are Proximus’ privileged interlocutors. Their interest? The money. And in a society where money comes first, it is difficult to think about one’s health (and especially that of others) and to refuse a financial opportunity: the information we have received mentions three contracts worth a total of 18,000 euros per year that the owners of the building, located on Avenue Léopold Wiener in Watermael-Boitsfort, have signed with Proximus, Base and Orange.

What could be more normal up to now: well-intentioned people are committed against a harmful and dangerous project. On closer inspection, however, there was something missing, like a blank, a great absentee that is not named, but which is there; it is that in the evening of presentation, the question of the object that required the antennas, was, how to say…? Not very present.  » That’s another problem,« the speaker said. The need for a smartphone(1) is not questioned, asking the question, expressing a doubt about it, is a bit like asking if eating or defecating could be the object of abstinence…

Since the need is « naturalized » and therefore unquestionable, the source of the problem is never mentioned. We come to turn around, to remain in the superficial, and any sensitive mind and endowed with a minimum of intelligence will feel a discomfort, a kind of confusion, a little as if we tried to persuade him that 1+1 make 3, that we can at the same time oppose and accept. Trouble.

Paradoxically then, the debate that should bring us all together makes us beings subject to their desires; these individuals are therefore only entities put together, which the collectivity does not reinforce by subsuming the individual interest of each. Because without being told, these people who are gathered tonight and seem to fight « against » something are only fighting « for »: for their health and, in the background, for the infrastructure — the antennas — since they do not question the necessity of the object for which the antennas are built.

Together we annihilate those others who, close to home, could not, did not or did not see fit to fight against antennas, the very ones who provide the network for those who oppose new antennas. Those who gather against this new project behave, when they are not fighting against all antennas, as if their own need for a smartphone — and thus for a network — does not imply the need for antennas and thus as if the others, who suffer from radiation, do not exist.

To localize the struggle, to refuse to widen it, is therefore inevitably to be contradictory by subordinating social welfare to one’s immediate interest, which in this case favors the operators.

The death of their struggle is thus included in their struggle, it is consubstantial to it. It is, whatever it looks like, deeply individualistic, and thus signs its own defeat. Of course, stuck in the moment, those who want both change and the same thing look askance at anyone who does not join their fight. They perceive it as « closed », « selfish »… but how would they react if, confronted with « neighbors » who are a few hundred meters away, one of them asked them to sign a petition to dismantle an antenna… which provides their network. Would it always be so open?

And what would happen if those present tonight to prevent the construction in their neighborhood, informed those who are farther away of the harmfulness of the antennas near their home, and that the latter informed others, and then these still others(2)… What if everyone knew about the harmfulness of microwave antennas? What if my interest was also the interest of others? This would necessarily imply a choice of society and the possibility of the disappearance of what is harmful. A real democratic debate.

Who really wants it? Who wants to go « backwards », and refuse this march of « progress », seemingly indefectible because we accept it?