WOULD WANTING TO SUCCEED FINANCIALLY AND MATERIALLY BE PATHOLOGICAL? 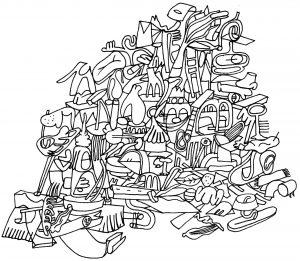 Economic development has given us access to a level of material comfort unprecedented in human history. Despite this material well-being, we continue to produce and consume more and more market goods and services. By warming the climate and depleting the ecosystem, this way of life threatens our quality of life, our democratic process and the survival of humanity. The imminence of a predicted catastrophe, which is revealed by the frequency and intensity of extreme weather events, droughts, pollution peaks, etc., requires a change in lifestyle and a social transformation in less than 10 years.

In order to accompany these changes, it seems necessary to answer a question that does not seem to preoccupy economists: why are we motivated to accumulate ever more money and material goods? Independently of the fact that it is necessary to earn money to ensure one’s subsistence and a minimum of material comfort, what is the use of the agitation to have more and more, which exhausts the organisms and the planet?

In the 18th century, Adam Smith already questioned the motivation to get rich(1). In studying the purpose of the pursuit of wealth and betterment, he found that individuals were more motivated by being recognized and regarded sympathetically than by earning money. So it is not reason, the instinct of ownership and self-interest, but vanity, the search for prestige and recognition that are at the root of the world’s turmoil and global warming.

At the end of the 19th century, Thorsten Veblen described the purposes of conspicuous consumption.  » To attract and keep the esteem of men, it is not enough to simply possess wealth or power: it is still necessary to show them, because it is to the evidence alone that esteem goes. By putting one’s wealth in plain sight, one not only makes others feel important, but also sharpens and keeps alive their sense of that importance, and, hardly less useful, strengthens and preserves all reasons to be satisfied with oneself. « (2) Conspicuous consumption is therefore not intended to ensure material comfort, but to show one’s status, to assert one’s success and to distinguish oneself in order to be loved, admired and envied. Not only does this quest for distinction have no limit, but it also has no possible end.  » If, as has sometimes been argued, the impetus for accumulation were the need for a means of subsistence or physical comfort, then it might be conceivable that the progress of industry would more or less satisfy collective economic needs; but because the struggle is really a race for esteem, for provocative comparison, there is no possible outcome. « (3) The race for esteem being the main motivation, equality of material conditions will never satisfy the need for social distinction. Let’s imagine that we can all afford a new Renault Scenic. Our objective is not to have a means of transport, but to distinguish ourselves from others, and owning a Scenic would lose all value in our eyes. Indeed, if everyone owned one, we would continue to ask for a salary increase to afford an Audi Q4. Whatever the amount of income, the individual imagines that if he earned more, he would be more admired, more loved and more respected by others, and therefore happier. Since he will always be confronted with someone who earns more than he does, he will always be frustrated by someone who can afford a car, a house, etc., that is bigger, more powerful and more modern than his.

The one who arouses interest in his money and material possessions is recognized more for what he « has » than for what he « is ». To feed his esteem, he is dependent on the jealousy, the covetousness and the envy of individuals who are as submissive and dependent as he is on the « having » mode(4). Sigmund Freud invites us to question the exclusive will to succeed in the « having » mode.  » It is that after having crossed, during the first childhood, a phase of purely passive receptivity, followed by a phase of aggressive/exploitative receptivity, all the children, before reaching maturity, pass by a phase that Freud qualified of « anale-erotic « . He discovered that this phase often continues to be dominant during the development of an individual and that, in this case, the anal character manifests itself, that is to say, the character of a person whose almost all vital energy is oriented towards having, saving and accumulating money and material goods, as are also oriented his feelings, his gestures, his words, his activity. […] What is important is the Freudian idea that the predominant orientation towards possession occurs in the period before the achievement of total maturity, and that it becomes pathological if it remains permanent. For Freud, in other words, the person exclusively concerned with having and possessing is neurotic and mentally ill; it follows that a society whose majority of members have an anal character is a sick society « (5).

Often, behind the desire to succeed in the « have » mode is hidden the symptom of an emotional lack linked to childhood. Being the symptom of a lack, a frustration or an inner emptiness, the one who is not aware of it risks wasting his time to fill them thanks to financial and material success. Eventually, if he « has » succeeded, he may have the respect of others for what he « has », but he will have difficulty eliciting love and friendship for what he « is ». The exclusive will to accumulate more and more money and material goods appears as a symptom of a psychological pathology, of a developmental arrest and of a lack of maturity. In other words, the individual exclusively concerned with the « having » mode is an emotionally, psychologically and emotionally immature neurotic. It follows that a society that mobilizes the vital energy and time of its population to favor accumulation in the « have » mode is also a sick and immature society.

The accumulation of money and material goods being a way to fill a gap, in order to reverse the ecological and climatic processes, as John Maynard Keynes affirmed, it would be necessary to invite economists, politicians, industrialists and bankers to consider the love of money as a more or less pathological and morbid inclination to be handed over to a psychiatrist(6). But, above all, that individuals have the temporal means to nourish their self-esteem other than through professional activity and consumption.