Where is the world going? 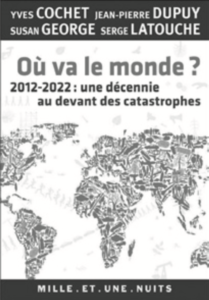 After reading, one would like to have at one’s disposal a hundred copies of the 76-page booklet, and to submit it to the same hundred individuals taken at random, in order to get an idea of the extent of the reaction. How many would be astonished by the main thesis of this book: we are slowly heading towards the great upheaval. The drifting boat we are all in being described by some « masters of meaning » as
— The media, politicians and bankers — who have a monopoly on description and have nothing to gain from change — continue to pass the boat off as a shiny liner: « growth will return, » they tell us. They are therefore the catastrophists, as François Partant said:  » the worst kind of catastrophism is not announcing disasters when we think they are coming, but letting them happen because we have not foreseen them and, even worse, because we have forbidden ourselves to foresee them « . To prepare for this, we will have to fundamentally revise our ways of thinking about time, thinking about the present by projecting ourselves into the future in order to link the here and now and this catastrophic moment to come, in order to envisage the means of limiting the effects (Jean-Pierre Dupuy), which cannot be done without a subordination of man to nature « so that the planet is recognized as the ‘supreme law’  » (Susan George).

Perhaps the most frightening thing, however, is that this generalized awareness, as difficult as it may be, and as unlikely as it may be, would not by itself allow us to avoid the great upheaval, but at least to prepare for it, because it is even more « difficult to imagine that this same society could quickly and profoundly change its behavior in the areas that depend on its vital relationship with natural resources » (Yves Cochet). Preparing for it, which is not superfluous, because despite the obvious decadence of the neoliberal Western order, all forms of decreasing experiences will already allow  » to bend the inevitable transformations in the right direction  » (Serge Latouche).