WHEN DISASTERS MAKE YOU LOSE YOUR HEAD 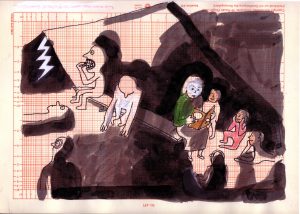 Following natural or industrial disasters, the media usually take stock of the human losses and quantify the material damage. But many survivors suffer from other after-effects that persist long after the disaster…

Whether natural, accidental or terrorist, disasters are sudden, overwhelming and often deadly. The economic damage can run into the billions and the victims into the thousands. In 2005, Hurricane Katrina killed 1,836 people(1) and cost U.S. taxpayers $160 billion(2), the equivalent of nearly one percent of the nation’s GDP. In 2011 in Fukushima, there were 2,129 deaths and a bill of $626 billion, triple the initial estimates of the Japanese government(3).

However, behind these « cold » figures lies another reality that is much more difficult to grasp: the post-traumatic psychological consequences. The subject is however fundamental, because in order to rebuild and prepare for the following disasters (because there will be some), it will be necessary to build up a strong morale, which implies first of all to understand what is going on and to be able to recover from such shocks.

There are hundreds of psychiatric studies on the effects of disasters(4). The first and most typical reaction of victims is numbness or denial. In a second phase, the shock may cause a state of intense stress (shock, trauma), followed by more lasting reactions such as anxiety, irritability, despair, apathy, loss of self-esteem, guilt, depression, confusion, insomnia, eating disorders or difficulty in making decisions. A grieving process then begins and usually lasts for at least two years(5). While some recover, others may be left with « post-traumatic stress disorder » (PTSD) which leads to serious difficulties (drugs, violence, suicides, etc.).

Among the more discreet but no less important syndromes, we should also note that the destruction of known landscapes can give rise to a feeling of loss and desolation called « solastagy », frequently felt by migrants or communities whose environment has been ravaged (the Inuit, for example). When these losses affect personal objects with strong sentimental or symbolic value, some people also feel a loss of identity, which implies a loss of self-confidence and difficulties in adapting and facing the future. Finally, a feeling of « eco-anxiety » can arise when disasters make the fate of future generations uncertain, resulting in feelings of abandonment, fatalism and resignation.

Let’s take a look at a recent study that shows that a disaster can cause quite discrete but very persistent symptoms in older people. For the first time, researchers at Harvard University were able to compare the health of a population before and after a major disaster(6). In Fukushima, seven months before the tsunami and nuclear accident, scientists interviewed « senior citizens » from Iwanuma, a small town about 80 kilometers west of the earthquake’s epicenter, where nearly half the area was subsequently flooded. Two and a half years after the disaster, the researchers were able to redo the same survey…

Of the 3,566 survivors aged 65 and older, more than one-third reported losing loved ones (family and/or friends) and 58.9% reported property damage. In the pre-tsunami survey, 4.1% of respondents showed symptoms of dementia. After the tsunami, they were 11.5%, and the number of people reporting not interacting with neighbors doubled from 1.5% to 3%. Those whose homes were destroyed and who were placed in temporary housing experienced greater cognitive decline. Specifically, the decrease in informal social interactions among friends and neighbors appears to play an important role in the increase in dementia. Paradoxically, the loss of loved ones does not seem to have an impact on the cognitive abilities of survivors.

Uprooting, rehousing, refugee camps, migration, all of these contribute to the fragmentation of the social ties that keep us alive and resilient. Thus, before disasters, all the work is to maintain active and frequent social ties. Within communities (neighborhood, family, ecovillage, district, etc.), it is about learning to cultivate relationships of reciprocity and trust and « norms of mutual assistance. On this condition, during and after the events, behaviors of sharing, mutual aid, solidarity and altruism (both material and emotional) can emerge very easily(7). Finally, during the reconstruction phase, measures that promote social bonding (such as « informal socialization » or participation in rescue and reconstruction operations) will decrease post-traumatic syndromes (cognitive decline and depression).

Good « social capital » contributes to the resilience of communities in two other ways: by enabling victims to better communicate their needs after the disaster; and by preventing exile, thereby accelerating rebuilding efforts(8). And if we have to migrate, then let’s not hesitate to follow the recommendations of a 2014 report by the American Psychological Association on the physical and psychological consequences of climate change: in the kits to be made in case of emergency, in addition to food, water and medicine, the experts recommend not to forget « religious or spiritual items, pictures, blankets and toys for children […], recreational items such as books or games, and paper and pencils for putting important information on paper » (9). This is perhaps what distinguishes survival… from life.