WELL, WHAT DO WE DO NOW? 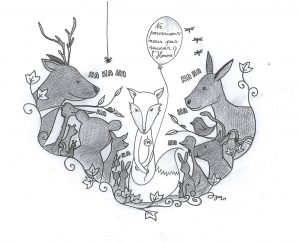 « The parliament of animals gathered to discuss the sensitive issue of the extinction of the human species, which now seemed inevitable. « — Unless we promptly mobilize all our energies to ensure its survival, » managed to articulate the fox. And, from the bottom of the oceans to the top of the sky, from all the floors of the creation, an immense burst of laughter started. »

This is an excellent question and I am happy to ask it to myself as well as to you, the readers of our courageous and tenacious gazette, in the elaboration of which I am honored to participate. As for the rest, like everyone else, I am going on with my life as a septuagenarian, in a couple with a person of the other sex with whom I intend to end my days. The question is:  » When and how will my existence come to an end? Still… There are some who have such thoughts only in rare moments of lucidity and who are rejected as soon as they appear. In some ways, they are quite fortunate and go about their business with a light heart and a carefree attitude. In the same way and for what it is about the great questions which shake a good part of the opinion today, many are still those who, quite simply, prefer not to think about it. Global warming, the disappearance of hundreds of animal species that is accelerating with each passing day, the silence that increasingly reigns in gardens, woods and forests; finally, the prospect of a radical collapse of our beautiful and glorious civilizations, all this « passes under their noses.

Now let’s get serious. Most of you, I am sure, are, as they say, aware of the immense perils that await the poor inhabitants of what was once a world infinitely rich in beauty of all kinds. I myself, it will not surprise you, am struck by what is happening to us and will soon happen to us, in forms that are truly unimaginable. And like you, no doubt, I am taking these small daily steps towards as much sobriety as possible. But, also, we are invited left and right by faithful friends; and we also invite these friends for agapes which have nothing sumptuous and we sprinkle these simple meals with wine or beers; and we speak about the end of the world, and then we laugh very loudly because that makes good, that alcohol is an accomplice of this carelessness and that the soft drunkenness moves away the spectres which would like to invite themselves at our tables. And most of us still go on vacation, sometimes very far away,  » just to take our minds off things ». To put it abruptly, the end of the world, just like the end of the month for many people, is very annoying, it bothers us but, in spite of everything, we live as we did about 40 or 50 years ago, before the alert was launched and took the magnitude we know today.

And then, all the same, lucidity obliges us to see that it is quite obvious that we are caught, individually, in the major impossibility of orienting in any way the course of things. So, yes, of course and all the same, we go and read our edifying books, we inform ourselves, we share the great ideas that are coming from everywhere. It would be necessary, the most desirable and urgent would be that, it would be enough that… « To hang the last bureaucrat with the guts of the last capitalist « , to put pressure on our rulers — but how, and once again, with what weapons? — to finally take the most urgent measures in these matters. But the political leaders, here and elsewhere, have still not perceived — or rather pretend not to see — the immense magnitude of the task that needs to be tackled in order to slow down a fatal process, the extreme urgency of which they still refuse to recognize, too busy as they are with caring for and securing their miserable careers. Certainly, some, like the dashing President Macron, make beautiful and precious speeches in which they promise to be the best defender of a cause finally recognized as vital. But even if these people were to come to a full awareness of the challenges we face, capitalism will not be abolished with the stroke of a spoon or the snap of a finger. The dominant economy and its dogmas will not be massively and radically defeated because this or that law would be voted by one or the other assembly, here or there. If the answer to the vast questions that need to be resolved is eminently political, it is difficult to see how and where to start them in a decisive way. And, supposing that this or that great power were to set in motion a large-scale process that would be likely to change the course of events, we would have to count on time and the resistance that would inevitably arise to hinder the best intentions in the world. In the meantime, voices continue to be raised complaining that business is stagnant, that recovery is not for tomorrow and that it would be good to shake the old coconut tree out of its lethargy. As the popular saying goes, we’re not there yet…