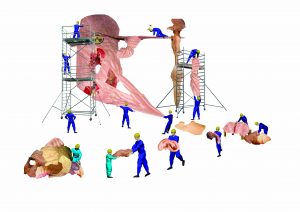 Nuclear decommissioning: who pays the bill and how?

The operator of a wind farm will not be issued an environmental permit if it cannot demonstrate how it will convert the site back to a green field after the permit expires. Solar panels

used parts should be carefully destroyed and the parts recycled. This is entirely justified. However, for those who operate a nuclear power plant, the law is much more flexible. Since the beginning of the nuclear age, there was a vague awareness that nuclear reactors would have to be dismantled one day, and that hazardous waste would be produced. How this nuclear dismantling would be carried out and what would be done with the radioactive waste, we did not know exactly. However, there was such faith in human genius and scientific and technological progress that it was believed that a solution would present itself in due course. Or not.

More than sixty years after the introduction of the first energy-producing nuclear power plants, there is still very little experience in the nuclear decommissioning of large commercial reactors, such as those at Doel and Tihange. In the United Kingdom, for example, in the absence of a proven decommissioning strategy, old nuclear power plants are shut down and monitored for 100 years. It is only after a century, when the radiation level has decreased a little through natural decay, that the actual dismantling of the reactors is tackled. How to safely dispose of the waste produced both during the operation of the reactors and during their dismantling remains a great mystery. This highly radioactive waste continues to emit dangerous radiation for hundreds of thousands of years. We should therefore in principle isolate them from the biosphere for a longer period than man has lived on Earth…

It is true that nuclear power plant operators are obliged to set up decommissioning funds, but it is extremely doubtful that these will be sufficient. First, there is the uncertainty

about the availability of these funds. Operators can use these funds to invest in their own sector, and the forecasts of rating agencies such as Standard & Poor’s for the nuclear sector are anything but optimistic. One fatal investment, and the fund vanishes.

Secondly, it is now strictly impossible to predict how much money will actually be needed for dismantling. If we do not know how the reactors will be dismantled, nor how the waste will be treated, we cannot determine the cost. The only thing that is certain is that the understanding of radiation protection and the threshold of public acceptance are becoming increasingly rigorous. Until recently, waste was simply dumped into the oceans. Not only low and intermediate level waste, but also old nuclear reactors from former military submarines. Today, the law prohibits it. Standards will become more stringent over time, which will drive up the cost. It is therefore almost certain that future generations will pay the price for nuclear decommissioning and waste disposal for a long time to come.

A nuclear reactor produces electricity for forty to fifty years, but its legacy continues to mortgage the well-being of future generations for hundreds of thousands of years. Our children and grandchildren will also pay the high price of nuclear power, which is now being touted as a cheap option to secure our energy supply. Nuclear energy is a textbook case of an economic activity where the gains benefit a few, while the community bears the cost.

Belgium has chosen the immediate dismantling technique for its reactors. The immediate term is sobering: on the one hand, the dismantling of a reactor and its associated equipment should take 50 to 60 years; on the other hand, the mountain of radioactive waste that will be generated will only become harmless after a hundred thousand years.

At what cost? Take the Brennilis power plant in Brittany, which has only one small 70 MW reactor that was shut down in 1985: partially dismantled to date — the most difficult part remains, the reactor and its building — the total cost is estimated at nearly 700 M€. By extrapolation, the order of magnitude of the cost of dismantling the 7 Belgian production reactors (~6,000 MW) would be 60 billion €, an estimate that is worth another for what is in essence incalculable, given the hazards of dismantling and the foreseeable explosion of the price of energy and raw materials during the decades to come

Dismantling is the promise of energy-intensive and dangerous work, along with the production of a mass of deadly waste. Taking into account this energy expenditure and that necessary for the management of the waste during eternity can only lead to this conclusion: the net energy of the electronuclear system, that is to say the energy produced minus the energy invested, can only be negative and therefore of no interest for humanity on the strict energy level.

There is no good solution for decommissioning as there is for the storage of nuclear waste. It is becoming urgent to realize and admit that nuclear engineering is an absolute failure of technoscience because it cannot undo what it has done, nor even mitigate its destructive character.

For the operators and shareholders, dismantling represents an unacceptable loss in their financial logic. Hence the desire of the political and financial oligarchy to extend the life of the reactors and even, beyond all reason, to restart reactors with tanks marked by thousands of micro-cracks.

With nuclear power, we are in a permanent state of war! This is not surprising, since a nuclear reactor is only a variant of the atomic bomb, which we do not know where and when it will explode. Because of the artificial ionizing radiation produced continuously by this technique, the victims are counted in the millions every year. The war is not limited to today’s humanity, it is also declared against nature and all living species as well as against future generations. To this situation, only one answer makes sense: the immediate shutdown of all nuclear reactors and of a technology that should never have seen the light of day, even if it means setting up a system of rationing consumption; towards a limited individual level of energy consumption to guarantee the sustainability of the social structure and of our physical environment in view of a better and sustainable world.

Complete dismantling is unrealistic because it is too expensive. It will probably never happen. The only way out would be to keep the nuclear sites safe forever…

In connection with the radiation protection standards, it goes without saying that the current laxity in this respect facilitates dismantling. It is enough to declare that below a certain threshold, there is no risk for a radioactive waste to be considered as inert! It is an outrageous manipulation that is at work!

Nobody talks about it, and yet the nuclear industry poses an insoluble problem: we will never manage to dismantle the 435 reactors already built in the world, 230 of which are in operation… Is it serious? Yes.

It is well known that the dismantling of nuclear power plants at the end of their life is a complex and very costly industrial operation. Between lack of know-how, recurrent technical problems, permanent risks of contamination, largely underestimated costs, and the impossibility of storing waste safely, dismantling is facing insurmountable obstacles(1). In France, for example, the Brennilis power plant in Finistère, which is supposed to be a « showcase for dismantling », has been in the process of being dismantled for more than 30 years! However, it is a small first generation plant of 70 MW, quite different from the gigantism of the most recent ones…

Let’s imagine an ideal world where experts would find all the technical solutions and — in agreement with the politicians — would start planning the dismantling of the old power plants (which have been in operation for 40 years or more) as well as those which have not yet reached their expiration date. We can easily deduce that this would take decades (at the earliest until 2070) and that the bill would be incredibly expensive…

Now let’s get back to the real world. Not only are geopolitical instabilities and climate disruption already threatening the normal operation of reactors (terrorism, armed conflicts, lack of water for cooling, floods, etc.), but the convergence of the multiple « crises » we are experiencing (climate, energy, ecosystems, pollution, finance, etc.) heralds an imminent collapse of our civilization(2). Nothing less! Such a collapse could take several decades (as was the case for the Roman Empire or the Mayans), but because of the interconnected structure of our globalized economy, it could also be much faster…

So what would happen if we experienced a financial, economic and political collapse of the nuclear regions in the first half of this century? First, it is obvious that there would be no more budget for dismantling. Then, there could not be any possibilities to find these famous technical solutions either. Finally, it is very likely that we would have a hard time finding volunteer labor to do this…especially if they don’t have the skills. In short, in this increasingly credible scenario, the plants will never be dismantled.

But let’s go to the end of the reasoning. Since they will never be dismantled, will we only have the possibility (time, energy, resources, manpower and technique) to place sarcophaguses on the 230 reactors? Do you really believe that? Worse: if a powerful financial and economic shock, or a global conflict causes a rapid collapse of the industrialized regions, will we have only enough time to shut down and cool the active reactors? It takes two hours to shut down a reactor, but it takes six months to cool it down! And during these long months, the device needs not only a constant supply of electricity, but also fuel and manpower. This is far from being guaranteed…