Unnatural handshakes in the Golan? 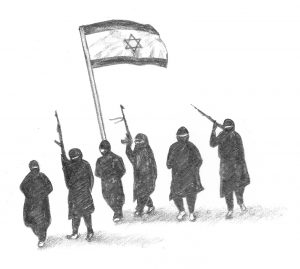 The Golan Heights… a fragment of land, a buffer zone, that Israel and Syria committed to demilitarize in 1974 after the Yom Kippur War and monitored by UN forces at the cost of 43 lives between 1974 and 2008.

To go through the recent reports of the UNDOF (United Nations Disengagement Observer Force) present in the No Man’s Land between Israel and Syria is to enter a world where shepherds cross fire lines, unspecified men take turns mining and clearing areas, bombs fall from the sky, civilians flee, men chop off heads… all the horror of daily life, expressed day after day in cold and haunting reports punctuated by calls for restraint.

A region scanned by international forces unable to stop clashes, not between Israel and Syria but between Syrian government forces, opposition forces and other foreign forces that have come to support one side or the other. A line of separation, a detail in the great Syrian war, with one specificity, the proximity of Israel.

By tracing the history of the Syrian civil war, one can see that some of the evidence has been proven wrong over time. It was presented by the Western mainstream media as a revolution of the population against the regime of Bashar al-Assad. However, since that time, independent journalists have reported that foreign militiamen were arriving in Syria to participate in the fight against the regime in place and that some states were financing opposition movements.

The trend that the opposition forces were mainly civilians who wanted to make their country democratic has long persisted in the news and in the discourse of heads of state. As the number of foreigners in the Syrian opposition forces increased over time, it became more and more complicated to conceal their presence, especially in view of the growing number of European citizens who decided to join the fight. It is now generally accepted that the opposition forces that continue to fight in Syria are mainly composed of radical Islamist groups (such as Daesh and the al-Nosra Front). The part of the revolutionaries who only want regime change have long since understood that democracy is no longer the object of this struggle.

Among the many countries surrounding Syria, if there is one that few would suspect of supporting the opposition forces (consisting mainly of Muslim religious fundamentalists), it is the state of Israel. However, the reading of the UNDOF reports reveals disturbing elements to those who take the trouble to read them carefully. Among the many incidents reported by UN observers, some reveal unexpected involvement of Israeli forces that sometimes raise questions about the neutrality of its government. Some of the incidents as transmitted to the members of the United Nations Security Council by the Secretary General Ban Ki Moon are available in French on the UNDOF website.

« (…) On many occasions, particularly during violent clashes between Syrian armed forces and members of the armed opposition, UNDOF has witnessed armed opposition members transferring wounded from the Bravo sector(1) to Israeli forces across the ceasefire line. »

Unlike the other events described in the reports, these have been grouped together in a single paragraph without communicating the exact number of events, the locations in which they took place, the precise dates, or the circumstances of their discovery. The difference in the way this information is treated is striking when one sees the precision with which other more anecdotal events are reported. However, we find this precise mention afterwards:

The mention of 59 transfers of persons is followed directly by the observation of the transfer of two cases:

The level of organization and preparation required for such transfers between Israeli forces and Syrian opposition forces is so great that it involves links and means of communication and a degree of mutual trust sufficient to put the lives of their men in the hands of their supposed enemy. One can only wonder about Israel’s motives in supporting the Syrian opposition. It is also difficult to believe that Israel could be motivated by humanitarian reasons.

One would think that the Syrian Civil War would have diverted the attention of the two countries towards each other. Yet this does not seem to be the case as illustrated by this example which comes from report S/2014/859 covering the period from September 4 to November 19, 2014:

« (…) On the morning of September 23, the IDF informed UNDOF that it had shot down a Syrian air force plane on the grounds that it had crossed the ceasefire line. UN personnel did not see the fighter jet fly over the area of separation or cross the ceasefire line, but did observe an explosion in mid-air, followed by falling debris in an area east of Jaba in the area of limitation on the Bravo side (…) ».

When we know that Israel helps wounded Syrian opponents, we can question its neutrality when it shoots down a plane of the Syrian air force flying over an area of Syria controlled in large part by Syrian opponents…