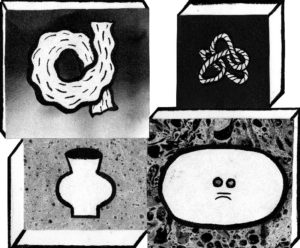 « How fragile we are, » I thought, « we all have big words in our mouths and we boast daily and continually about our endurance and sanity, and from one moment to the next we topple over and have to choke back the tears that are inside us »
(Thomas Bernhard, in BETON, « L’imaginaire », Gallimard, p.83)

My arms fall off, and everything else falls in the same irrepressible movement. Everything, absolutely everything, is falling, collapsing, liquefying, dissolving and taking on abject and perfect formsunspeakable. There are evenings when, seeking sleep, images come to me of a radical sharpness and which could very well illustrate I don’t know which book or film of horror or science fiction of which no author has ever had the least tiny intuition. We see crowds attacking other crowds in a bloody and murderous marasmus for stubs of bread or cans of food, rotten vegetable scraps and shreds of cloth; stores stormed and looted by the multitudes that squads of police, gendarmes and other armed forces try to disperse with the means equal to a situation that would be nothing short of insurrectional — but in vain! These means, decided in high places, go from the blows of truncheons or rifle butts to the shooting of war bullets, passing by the sophistication of other methods today under study in the staffs of the forces of order and which, for the occasion, could opportunely be experimented: paralysing and asphyxiating gases, deafening grenades and other finds born from the most modern brains and acquired to the projects that the time gives itself, or, more exactly, its managers. The latter, more and more in phase with their time — which is not, and can never be, ours — persevere, against all odds, in pursuing the projects and designs of their masters.

After the sinister holiday season, we will see the endless promises of better, more, more, and so much new and interesting coming from the communicators at the service of the political dwarfs

Enough is enough! This is too much! The cup is full, it is not far from overflowing. And it’s going to get more and more appallingly sordid and cruel. After the grim holiday season (who will have had the heart to wish a happy new year), we are now in the process of We will seethe endless promises of better, more, more and more, being made everywhere. so new and interesting coming from the communicators at the service of the political dwarfs who everywhere and at all times will launch into the great maneuvers of seduction towards their future voters, who are, properly, only this haggard and stupefied herd, stunned and perverted by decades of a propaganda worthy of the United States. authoritarianism of the past to which, in vain, here and there and with diverse fortunes, one strives, with a beautiful and praiseworthy obstinacy to denounce the perversity and the ignominy. But, alas, alas, alas(1)… everything that could make the impudent pretentiousness of the professionals of the dominant thought fall into the millions, the billions of ears of as many deaf people. Deaf, blind, paralyzed, stuck and as if petrified are, for the most part, the men — and women of this time. To be convinced of this (and as far as it is still necessary), it is enough to have penetrated for a few minutes in one of the consumerist temples of any suburb of a medium-sized city on the eve of the end-of-year celebrations or to have, by simple curiosity anthropology, only a little, just a little, wandering among the Christmas markets that have proliferated everywhere, to convince oneself almost definitively that the stupidity, the repulsive and sordid stupidity that engenders the era is well and truly accomplished everywhere, as the end of the spirit and the general retreat of intelligence is accomplished everywhere. Against this, alas, the most obstinate of those who, precisely, in these pages and elsewhere, try to arouse and convince the public but also those who constitute our pitiful elites of what it would be necessary to implement to put an end to the dreadful reality are, today, to make the painful observation of their impotence and the vanity of their efforts.

Here, we see that the owners of the world are setting up a new and unprecedented form of feudalism, with, on the one hand, the wealthy controlling absolutely everything in the world and monopolizing all the riches, and, on the other, the growing crowd of new serfs who are fundamentally incapable of even apprehending, explaining, and even less of understanding what is being played out against them; here, we clearly say that a form of fascism soft is gradually and inevitably replacing what used to be our parliamentary democracies and, elsewhere still, the worst prospects for the environment are being predicted, the spectre of war is being raised, which for some would be a godsend and a way like any other to continue and accomplish in a radical way the inexorable downfall in which we are being dragged. Certainly, there are some who, still and against all odds, continue to hope for some large-scale social movement, the sudden awakening of the multitudes or the conquest of political power through the votes cast for this or that organization or vanguard party. In addition to the sympathy and the community of ideas that one can feel and share with those who refuse to Although we havegiven up, we are nevertheless forced to note that the time is far from ripe for the much hoped-for and expected great upheaval, far from it.

So what to do? What can we think, say or write, what can we hope for if indifference and despondency permeate and obstruct all space to this extent? There are those who prophesy and, in advance, almost rejoice in the unforeseeable suddenness of such and such a catastrophe or major cataclysm, which would be the result of one of the whims of which nature has the secret or, again, pertaining to major malfunctions of the great machine of production and distribution of what we are collectively so dependent on and which would provoke, this cataclysm or this catastrophe, a sudden and universal reaction on the part of those who, until now, thought they were safe from everything. But the truth is that there is no lack of disasters and calamities ! Poisons of all kinds in our everyday food and in the air we breathe; the increasingly alarming aftermath of the accident at the Fukushima nuclear power plant during the tsunami that ravaged the Japanese coastline, all this and more, almost ad infinitum, make up the sordid backdrop in the midst of which we continue, collectively and individually, to go about our lives blissfully and as if by magic.nd nothing was.

In the face of this, even anger is no longer appropriate; neither is sorrow, nor pity. Only an immense dismay, a fatal lassitude and a sadness without name. At the risk of  » despairing Billancourt  » I am wondering if it would not be good for me to devote myself to some studies or distractions: entomology, the collection of stamps, cigar rings; or the practice of yoga. As for the suicide, the question remains for the moment in suspense…