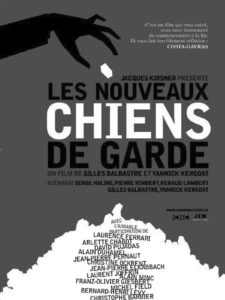 The report by Gilles Balbastre and Yannick Kergoat, which has so far had more than 200,000 admissions in theatres, compiles damning data against the French journalists-experts and editocrats who reproachthe ideological line of their master. Their « freedom of expression » seems to be more at the service of large industrial groups and power, pandering to politicians, flattering the « big guys » and, from the height of their magnificence, snubbing the « little guys », distilling their unique thought under the clothes of plurality.

Making a film about the underbelly of the media and their reverent journalists has a double advantage: first and foremost, it generates independent thought from the formatted thought that this « economic » journalism distills in people’s minds all day long, offering proof of their submission to money and their thirst for power; but by the very reaction of these incriminated journalists, it adds to the investigation that wanted to prove, the proof of the reaction to the investigation. We can read in the « docile pooches » critics of the film, without astonishment:  » a charge that proves to be far too Manichean to be convincing  » (le Figaro);  » a political operation led by a small group from the extreme left  » (the new observer) « ,  » to want to consider that all press bosses are to be put in the same basket, in the name of the position they hold and the position they manage, it is a bit short  » (l’express), etc. Obviously, we did not expect the canines pointed at, cornered, and their supporters to confess and change sides.

The reactions are therefore only a continuation of those seen in the report, where the « guardians of the status quo » camp all sorts of postures to dismantle the film’s statements and prove their good faith. But their gesticulations don’t work. One recognizes the signs of the thought they represent, their collusion with people of power and money, their shameful salaries, their shameless attempts to convince. Only wanting to be like them, or already being like them, can prevent the subject from understanding the facts that overwhelm these journalists.

Quite well received in Belgium, one wonders if the situation would be the same if we were to look at the underbelly of the Belgian watchdogs, a situation quite different from their French colleagues, of course, but which would certainly reveal many enlightening elements.