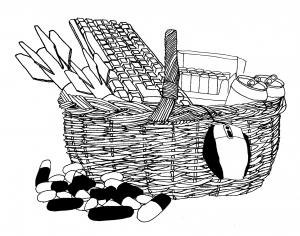 John Brunner’s The Blind Herd (published in 1972) is the masterpiece of ecological fiction(1). It was for its time a work of terrifying pessimism, the most dramatic of all this literary genre in its poignant descriptions of pollution and environmental destruction. 1972 is also the year of publication of « L’Angoisse de l’an 2000 » by Roger Heim, and of the creation of the magazine « la Gueule Ouverte », « the Journal that announces the end of the world ». The English title of « The Blind Sheep look up » is borrowed from verse 125 of John Milton’s poem Lycidas: « Hungry sheep look up (and are not fed) ». In this ecology-fiction novel, humanity is dying either from hunger or from cancers caused by food and environmental pollution. John Brunner did not see coming, it is true, the generalized nuclear pollution and the delirium of genetic chimeras: the poisoned cherries on the toxic cake, let’s excuse him. What he saw coming in « The Blind Herd », however, is the takeover of organic, the piracy of organic, the adulteration of organic… Forty years later, the blind herd, in search of wellness and nutrition worthy of the name, rushes to the « organic » supermarkets without the slightest suspicion of the identity of those who pull a large part of the strings.

In my essay « Gaia’s drums have awakened » in November 2013, I certainly threw a big wrench into the works when I wrote:

« In Europe and North America, most of the « organic » food distributors have been bought up by the big agribusiness cartels: Nestlé, Cargill, Coca-Cola, etc. In France, for example, Lima and Danival have been bought by Hain Celestial, in the USA, behind which lies the money of Monsanto, Walmart, Philipp Moris, City Group and Martin Lockeed. In France, buying organic products from Bonneterre, Bjorg, Evernat, Allos, Tartex, Alter Eco… means participating in the prosperity of the Dutch company Royal Wessanen, one of the major European food groups. In France, 95% of the organic vegetables marketed are produced from F1 hybrid seeds; this means that the organic consumer, for example, has one « chance » out of two to buy a Monsanto/Bayer/Syngenta organic melon, since these three chemical groups own half of the 250 varieties of melons registered in the national catalog of the GNIS; this means that many organic market gardeners are complicit in the destruction of food biodiversity. In France, the Kokopelli association is « certified » organic by Qualité France, which has been bought by Bureau Véritas, one of the world leaders in industrial control. In the Third World, IFOAM (the international federation of organic agriculture) cuts down poor small farmers to produce organic, and even more organic, for export to rich countries, for the organic industry, and therefore for the industry itself. Ad nauseam. »

In November 2012, when the state of California presented Proposition 37 to a popular vote to mandate GMO labeling, there was an outcry from the agrochemical industry, which funded a campaign to defeat the proposition.

Then organic consumers were shocked to learn that a hundred companies offering organic foods were in fact in the hands of the Agribusiness Cartel or the Agrochemical Cartel and began to deselect these companies from their shopping cart. There is even a downloadable application for cell phones in the USA that allows you to find out the identity of these companies in order to boycott them.

In France, too, a number of organic companies are subsidiaries of one of the largest European agri-food groups, the multinational Royal Wessanen, which employs 2100 people. Royal Wessanen is listed on the Amsterdam Stock Exchange. Some of its major shareholders are:

Provamel is one of the brands, together with Belsoy and Alpro Soya, of the company Alpro, a subsidiary of the Vandemoortele Group, created in 1980. Alpro is the European leader in organic and non-organic soy products. Alpro was sold in 2009 for $455 million to Dean Foods, the world’s leading milk distributor, which controls 90% of the milk in the US. Alpro distributes its products in about thirty countries.

In 2009, the Organic Consumers Association called for a boycott of Silk because some of its soybeans were sourced from Brazil (deforestation of the Amazon) and China in ethically questionable working conditions.

On the ethical front, it should be remembered that in November 2012, Dean Foods donated $253,000 to fight Proposition 37 in California to mandate labeling of GMO products. In 2009, the Cornucopia Institute charged Dean Foods (Horizon), Abbott Laboratories (Similac) and Nurture, Inc. (Happy Baby) of deliberately contaminating the organic food chain by introducing oils processed with synthetic solvents by Martek into organic foods such as milk and baby food.

In April 2010, the US Department of Agriculture (USDA) declared Martek’s oils illegal for the organic sector, but the Obama/Vilsak administration (a Monsanto front man) blocked the implementation of this decision for another 18 months, especially under pressure from Dean Foods lobbyists.

This was his second major takeover, as in August 2006 he had bought the Belgian leader Biomarché, based in Sombreffe, which became ProNatura-Belgium. By acquiring Biomarché from Hain Celestial (the current owner of Lima and Danival!!), ProNatura became the European leader in organic fruit and vegetables. But in 2008, ProNatura Belgium lost an important client, the Delhaize Group, for which it supplied 300 stores under the Delhaize Bio brand. This was a dead loss because in Belgium, one third of the organic fruit and vegetables go through Delhaize supermarkets. In 2010, ProNatura decided to take over the supply of certain retail stores such as Système U and Cora France, which it had previously entrusted to Pronatura Belgium. On April 19, 2010, La Libre Belgique wrote: « The union leaders will visit the office of the Walloon Minister of the Economy, Jean-Claude Marcourt (PS), this Monday or within the week, to make him aware of the situation of the company in Nivelles. But it seems that it is experiencing profitability problems, which would not be to the liking of the pension fund Activa Capital, the majority shareholder of the ProNatura group, created by Henri de Pazzis. Henri de Pazzis is still the chairman of the group. Its Belgian subsidiary was subsequently put into liquidation in 2010, laying off about 50 people.

It is understandable that ProNatura/Activa Capital did not want to plug the holes of a loss-making subsidiary while it was redoubling its efforts to develop its production subsidiaries in Africa. Moreover, there are no union representatives in Togo.

Let’s take a look at Tradin Organic (The Organic Corporation B.V), one of the most important European organic wholesalers. This wholesaler sells sunflowers from Bulgaria, beans from China, sesame and coffee from Ethiopia, sugar and coconut oil from Indonesia, orange juice from Mexico, rice from Indonesia, red fruits from Serbia, pineapples from Vietnam, etc. In 2008, Tradin Organic was acquired by the Canadian multinational, SunOpta (6).

In conclusion, Tradin Organic/SunOpta, one of the most important European organic wholesalers, is financed by the same multinationals that finance Hain Celestial in the USA or Royal Wessanen in Holland. And this, to plunder the Third World of its biomass since the « sourcing » of its « organic » products is strictly in the poorest countries of the planet.