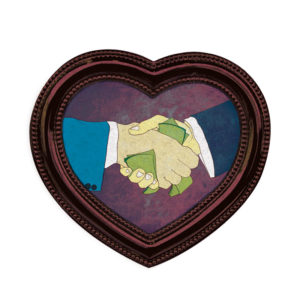 As a « brand » of the IPM group (with, in the media, also the DH/Les Sports, DH Radio, Paris MatchBelgium, 13% participation of the Belga agency), can La Libre Belgique let the journalists who still believe in the free press, write what they want to write? that they think is right, true and necessary?

Imagine the chain of custody:

1| We start with the boss of IPM: Denis Pierrard, a commercial engineer by training, began his career with Solvay in the United States and then with McKinsey, a multinational company specializing in strategic consulting for businesses. It seems that to reach the high media spheres, going through the commercial and financial sector is a promising way: his counterpart, Bernard Marchant, CEO of the Rossel group (Le Soir, Wham, Metro (49%), etc.), was himself a former tax advisor dear Arthur Andersen, vice-president Europe of the Olivetti IT group, later managing director of Beckaert, world leader in metal. Afterwards, Denis Pierrard joined IPM, which he left to join Ackermans and Van Haaren (AvH), which defines itself as a creator of  » shareholder value by investing over the long term in a limited number of strategic holdings with international growth potential (1). For the record, Luc Bertrand is President of AvH and his daughter, Alexia Bertrand, is one of the administrators but also head of cabinet of the Deputy Prime Minister Didier Reynders. It was in this capacity that a conflict of interest was denounced in a file of the firm concerning offshore wind power that was supposed to be awarded to Deme, a 100% subsidiary of AvH. Either, it is not our business, nor La Libre’s, there could also be a conflict of interest… So Denis Pierrard joins Libération, in which François le Hodey, one of the owners of IPM, holds 8%, and where he will be able to  » mainly take care of the operational management « (2).

2| Bertrand de Meeûs: editor-in-chief of LaLibre.be since 2012, takes the reins of the paper in 2018. Also a teacher at Ihecs, the position of editor-in-chief does not imply having gone through business school and having worked in large tax consulting firms, it is enough to have integrated the software of The Free, to know who are its real bosses and what they want, in short to obey and to ensure a look-control of what can or cannot be said. But it is also necessary that this content is assured, we focus only on the container, by going towards what those who most often do not want to hear about revolution (the real one) call the « digital revolution »:  » Over the past few years, we have gone from strength to strength with LaLibre.be and its applications, the La Libre brand has found its place in this new social and technological environment, thanks in large part to the vision and dynamism of its editor-in-chief(3).  »

3| The editorial staff: between the « underlings », the « vices », etc., who ensure the relay of the chain of command, we find the journalists and the freelancers. The latter, basically, have no rights and especially not the right to propose content that would displease the one who pays them. The others, if they still have any vague desire for freedom, are bound by some material considerations, like these young recruits of the mass media who, disgusted with the disgustingness of the editorial offices, had refused to testify:  » I hope they will contact you. They are still a little hesitant because they fear for their jobs, which they have so hard to find. I will see them soon, I will discuss it with them again « (4).

After that, what’s left? In this case, direct censorship is of little use, self-censorship will do the job. And, more often than not, when the censorship appears, it will take on the guise of reason and rigor: they will say that we  » doesnot support « , that there is « no not enough explanations « , that we need to find something « that will help us ». more relevant « , will evoke  » something a little simplistic « ; they will pretend to suggest  » which ismore journalistically correct « , never saying what their journalistic plan is, especially when it is a small hand that works, an underling who passes on orders from above in exchange for a few honorary gratifications and some pretence of power sufficient to infatuate him. And when your information seems unstoppable, they will tell you that your words are  » excessive « You are accused of playing into the hands of populism and demagoguery, especially when you talk about revolution and explain the coherence of the business class, without it even occurring to them that it is their propensity not to talk about it, relegating the left to identity and societal struggles, that has played into the hands of the extreme right.

BEYOND THE EDITORIAL STAFF…

IPM is owned by the Le Hodey family, the 410th largest Belgian fortune (35,841,000€), which owns various « brands »: in addition to La Libre, the DH, Paris Match Belgium, which brought you soccer during the World Cup, reaping its profits via BetFirst, which it owns and which alone occupies a tab on the DH website; Whitefox (digital marketing); IPM Advertising, marketing in particular  » all RTBF websites: news, sports, audio & video on Auvio, but also TV, radio, etc. « . IPM has stakes in RTL Belgium, the Belga agency, Evosys (a company selling real estate brokerage software). What does journalism have to do with most of these investments, you may ask? None. That is why IPM makes sure that the pages of La Libre will establish this link with their interests, placing Denis Pierrard as general manager of the editorial offices, but also retaining a Board of Directors, of which IPM renews a part in 2015(5) and in which we find:

- Pierre Rion : civil engineer graduated from ULg, he defines himself as a  » serial entrepreneur « , a  » business angel « . He is president of the Cercle de Wallonie, of the Association des Vignerons wallons and of numerous organizations and societies. He was « Economic Leader of the Year » (Lobby Awards 2016). It was he who said:  » A good citizen must be a money pump that keeps the economy going « (6). A whole program…

- Bruno Lesouef : died in 2018, had been director of Public Affairs for the Lagardère Group and manager of Hachette Filippacchi Associés.

- Denis Steisel :  » Belgian serial entrepreneur « , is a boss and investor in multiple companies related to digital technologies. It is « managing partner of Eezee-It, specialized in digital transformation, co-founded Emakina Group, a digital agency, is a member of the investment committee of WING (Wallonia Innovation and Growth), an investment fund for Walloon start-ups. His function at IPM? « Helping the group face the new challenges of the digital economy’  » « (7).

- Alain Siaens Chairman of the Board of Directors of IPM, Doctor of Economics, former Professor Extraordinary at the Catholic University of Louvain, worked successively for JP Morgan Bank, Groupe Bruxelles Lambert and then Prominvest. He joined Bank Degroof in 1990 as head of the holding activity, where he was in charge of investment banking activities from 1993 onwards: corporate financing, mergers/acquisitions advice, private placements, IPOs, etc. He has been a member of the Board of Directors since 1998 and in 2006 he handed over to Regnier Haegelsteen. He leaves but does not leave as he takes over the chairmanship of the bank’s board of directors. It is easy to understand why, when the editor of Financité will mention the 221 billion tax evasion, he will write to her, without even introducing himself and with the morgue of a banker:  » I congratulate you and would like to know the statistical source of the 221 billion of the 563 companies, transferred to tax havens « . Bad luck, the source was the SPF Finances…

AUTOPSY OF THE GROUP

The Le Hodey Group is composed of 16 companies(8):

1| 99.99% of the Maja Group (the rest, a very small part, belongs to Axemedia and IPM Press Print NV as a result of hidden arrangements), which itself has holdings in :

5| The Le Hodey family owns 100% of Traxxeo (47.37% of which is owned by the Maja Group, which also belongs to the Le Hodey family), Traxxeo which itself owns 100% of Mobiliteit and 100% of Ipartner. Traxxeo (http://www.traxxeo.fr) is the specialist in the Internet of Things in the construction sector, managing resources via new technologies that collect data and remotely control the activity of workers, machines, vehicles and equipment. It is, if we read its description, the conclusive element of the loss of autonomy inscribed in the new technologies, and the loss of control over oneself that it causes:  » Traxxeo offers an open software platform that allows you to collect data from many connected devices: vehicle black box, time clock, RF tag, phones, tablets, connected objects … So don’t expect La Libre to devote a dossier on new technologies in total editorial freedom… Traxxeo collaborates with :

- Eiffage (http://www.eiffage.com): a company involved in construction, infrastructure, energy and concessions, which is notably involved in the LGV Bretagne-Pays de la Loire, the extension of line 14 of the Paris metro, the Luma foundation in Arles9 : a  » Luma Arles, a silver tower with a thousand reflections, with its glass rotunda and its thousands of stainless steel blocks that will create as many silver reflections, the tower of the Luma Foundation in Arles (Bouches-du-Rhône) will mark the entrance to a public park of 6 hectares. Eiffage Métal, as part of a consortium, will be responsible for the building’s envelope, designed by architect Frank Gehry, which will be 56 meters high. 50,000 hours of research were needed to orchestrate the installation of the 10,000 m² of facades, which are composed of 300 metal panels, 11,000 stainless steel blocks, 50 « glass boxes » and a 5,000 m² rotunda.  » ;

- Veolia (https://www.veolia.com), which supports overproduction with energy-saving technologies that reduce consumption in the oil, gas and industrial food sectors;

- Besix (https://www.besix.com):  » The BESIX Group has become a multidisciplinary company with a leading position in its markets of activity: construction, real estate development and concessions. BESIX Contracting is specialized in the realization of construction, infrastructure and maritime works which are often distinguished by their complexity « . The Besix Group is represented in Belgium by 17 subsidiaries: Belemco, Besix Concessions and Assets, Besix Infra, Besix Park, Besix Red, Be Wind, Cobelba, Franki Foundations, HBS, Isofoam, Jacques Delens, Lux TP, Vanhout, Socogetra, Van Den Berg, West Construct, Wust. In the Benelux and France, the Group is strongly represented by the regional subsidiaries BESIX Infra, Belemco, Vanhout, Wust, Cobelba, Jacques Delens and Lux TP, which guarantee a local approach. In collaboration with Franki Foundations, West Construct, Socogetra, Sanotec and Van den Berg, the Group offers specialized niche solutions such as deep foundations, geo-engineering, road works, water treatment and cable and pipe laying. In Belgium, Besix is responsible for the construction of the BNP Paribas Fortis headquarters, the « promenade » parking lot in Nieuwpoort, City Dox, Ijzerlaan, the KBC headquarters, the Hertsal viaduct, Docks Bruxsel and the R4 in Ghent.

- Bam : Belgian construction market with many Belgian and Luxembourg companies;

6| Sagevas, owned by the Le Hodey family via IPM Group NV, holds 100% of the shares of Turf Belgium.

9| Hyode, whose shareholders are the Le Hodey family (50%) and DNA, has interests in :

12| DNA, which has an interest in Hyode.

15| Sport Group Development, which has a stake in X‑Free Sport Management.

16| Mobiliteit, whose sole shareholder is Traxxeo.

Smile, you are surrounded, between cross-shareholdings, tax lawyers, the IPM group has been able to place within the editorial staff those who advise or used to advise the companies they own, thus ensuring that they are never really bothered.