THE COP 21 IN PARIS OR THE SUMMIT OF PRETENSE 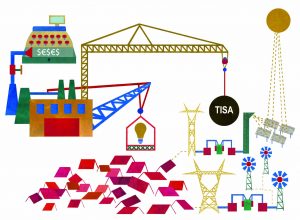 In 2009, in Copenhagen, the Danes did not succeed in making a success of the resounding failure of the COP 15. The French are much better at pretending. The December 12 agreement, expected once

moreover as the last chance to save the climate, was presented by François Hollande and Laurent Fabius as a historic agreement. It is, according to them, ambitious, balanced and, above all, legally binding.

The loud applause that followed the gavel from Laurent Fabius signifying the end of the debate and the adoption of the text showed the general satisfaction of the participants. Everyone praised the effectiveness of French diplomacy and the post-match comments had the same positive tone. I must admit that I was (very slightly) shaken by this concert of praise. Doesn’t my usual skepticism, largely justified by the results of previous COPs and the ineffectiveness of the mechanisms put in place (emission quotas, Kyoto Protocol, Clean Development Mechanism), make me malicious? I was quickly disillusioned when I heard Jean-Pascal Van Ypersele justify his satisfaction by arguing the « moral » constraint imposed on all those who would not respect their commitments! The naivety of the statement stunned me; a careful reading of the text of the agreement definitively swept away my timid conciliatory impulses.

Of course, we can welcome the will to succeed affirmed throughout the text and the objective to contain the rise in average temperature below 2°C and to continue the action taken to limit this rise to 1.5°C. However, there is still a lack of clarity on the policies and actions needed to achieve these goals. Worse, the preambular statement insists on the urgency of « closing the significant gap between the global effect of the commitments made and the global emissions pathways to keep the average temperature increase below 2°C » but does not require anything to correct this situation. Article 15 announces the establishment of a mechanism to facilitate implementation and promote compliance with the agreement. However, this mechanism will operate in a non-adversarial and non-punitive manner! In conclusion, the agreement is « ambitious » but postpones the means of putting it into practice and, above all, formally excludes any binding provisions.

Only one element must be considered as positive: any national contribution will be in progression compared to the previous one, knowing that this contribution will have to be determined every 5 years. It takes a special kind of benevolence and an unwavering willingness to be positive to hail such an agreement as a success and a promise for the future. It leaves the door open to positive initiatives but says nothing about the means, except to salute those already in place and whose inefficiency is flagrant, such as the Kyoto Protocol.

Sustainable development and green growth remain topical. Under these conditions, we can expect the worst. Bright days are ahead for geoengineering CO2 capture and storage and nuclear extension projects.

Bill Gates, present in Paris with the organizers, will not be disappointed; he, who finances the most suspect research in geoengineering, must even be delighted. The CEO of Total, Patrick Pouyanné, also has something to be proud of: « We are partly responsible for the problem, but we are also part of the solution, » he dared to say. As for the nuclear sector, it was able to count on the unwavering political support of the ruling class of the organizing country so that it would not be talked about, thus endorsing the propaganda speeches of EDF.

Moreover, no clear promising signals have been given. Nothing is proposed on GHG emissions from air travel. Nothing about the climate impact of military activities. Nothing on oil and gas extraction activities in the most vulnerable areas of the planet such as the Arctic. Would the future be so dark? I have every reason to answer in the affirmative. How can greenhouse gas emissions be reduced when the keys are in the hands of multinational groups to whom the States concede most of their prerogatives? The multiplication of free trade agreements and the ongoing negotiations for a large transatlantic market clearly show what the real priorities of governments are.

The logic of growth cannot be reconciled with a reduction in GHG emissions. Instead, it calls for the development of absorption techniques to offset emissions. This is the implicit and hidden bet of the December 12 text. Have we heard about the TISA project? No, of course not. This is a new draft free trade agreement on trade in services. It has been discussed in great secrecy for several months (recently revealed by Wikileaks). Its last round of negotiations took place last October in Geneva. It brought together representatives of 23 member countries of the WTO (World Trade Organization), including Australia, Canada, the United States and the European Union (the 28 member states represented by the Commission). Its objective: to reach an agreement on services that is broader and more ambitious than the one adopted in the framework of the WTO (GATS). It includes in particular energy-related services. In particular, it plans to introduce the principle of « technological neutrality », according to which the commitments would apply to all energy sectors regardless of the energy source or technology used, thus denying the legislator the right to distinguish between solar and nuclear energy, wind power and coal, geothermal energy and hydraulic fracturing.

Through this agreement, power over energy policy would be officially transferred from the states to transnational companies. The latter, based on TISA, could prevent states from regulating the energy market. The duplicity of the actors who are at the helm of the climate negotiations and at the same time send their representatives to negotiate TISA in Geneva is blatant. While feigning voluntarism to reduce their greenhouse gas emissions, they are paving the way for a fantasized and most hazardous technological solution.

Fortunately, glimmers of hope are appearing around the world. Grassroots initiatives, based on renewable energies, short circuits and a logic of sobriety and sharing are springing up every day and preparing the future. The boycott campaigns of financial institutions that invest in the oil industry and the increasingly assertive reticence of certain politicians towards the great transatlantic market are opening up gaps in the great consensus.

Opposing free trade agreements by all legitimate and non-violent means and denouncing the manipulation campaigns of the big polluters will not convince governments but will end up shaking the foundations of an economic logic whose violence and inhumanity are more and more obvious.

Paul Lannoye President of the Grappe