The conspiracy reflects an opaque and incomprehensible world 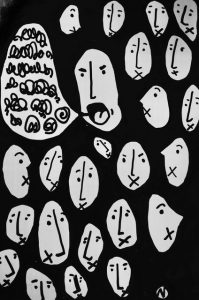 Conspiracy theory was born from the idea that an oligarchy would lead humanity throughout the world towards a future that completely escapes the common people because it is designed to serve them, in other words, the opposite of the democratic ideal. This feeling is particularly present in the working class suffering from the multiple evils spread by the discriminatory functioning of our economy, all this being aggravated by the profusion of often contradictory information, and this in spite of the existence of official speeches intended to reassure us and to counter the intensive use of the famous « social networks » at the origin of « fakenews ». In this sense, there is in conspiracy theory a core of truth expressing a widespread popular feeling that we live in a society whose steering completely escapes us, not only politically, but also intellectually, because we no longer possess the codes, unlike in the past when we could make it intelligible. Obviously, the anxiety-provoking context created by the pandemic contributes to making this feeling more vivid among us, fuelled by the uncertainties of science, which can no longer claim to hold the truth because of the existing controversies between experts, and its links with the places of power.

After years of progressive propaganda hammering us that the future would be better than the present, following the eruption of the Covid-19 pandemic hitting the whole world, we are now plunged into the prospect of a future that is the opposite of the one that had been announced for ages. From there, new words were born that were highly mediatized because they were linked to the context, such as transition in terms of ecological conflicts, or in the health field, complotism. This social fact is aggravated by the digital hold on society manifested today by the intensive use of the famous social networks, especially among the young. These networks transmit information often hidden by the media, whose images and speeches have impregnated the mentality of modern man, hence the disarray of the latter who can no longer find his way in his traditional mental universe: the right and the left, the present and the future, the past and the future, and more seriously, good and evil. Confidence in science is shaken in the public space, its certainties being questioned because of the conflicting discourses between specialists. And this is all the more true because in our society there is a permanent and general censorship on the most sensitive issues, as Pièces et Main d’œuvre says very well:  » What does she know about herself? you might ask. To the care we take to hide it. This society, which has been variously described as industrial, technical, leisure, consumer, entertainment and, recently, information, reveals itself to be a society of secrecy, and this is its first secret, the one that covers all the others. Scientific, industrial and commercial secrecy, defense and secret services secrecy, forbidden zones and classified archives, shell companies, tax havens, electronic financial circuits, censorship by silence or by noise. In this society claimed to be « open » by its apologists, there is nothing so difficult as to grasp a partial truth and to pull the thread beyond the veil of « transparency » and communication behind which the real truth is hidden; for the truth is the whole truth « .

This observation explains a lot of collective and individual behaviors that can be encountered today in a society where significantly the word « transparency » has never been used so much, in all fields. As such, it fulfills a propaganda function intended to disorientate the opinion a little more! One could then say that the relations of the modern individual to his environment resemble somewhat those lived by the so-called primitive peoples in permanent symbiosis with nature, the latter representing a sacred world that could only be interpreted by mythological tales and sorcerers. This threatening opacity of nature, which determined human existence at the time, was to be transgressed by the scientific spirit, which ended up desacralizing it, without giving any meaning to human existence. But today, the sacredness of nature has been transferred to technoscience (cf. Jacques Ellul), the increasing complexity of our daily world stems from the sophistication of the techniques used in all fields, a process aggravated by the generalized digitalization of our existence which is imposed on us without us knowing exactly why and to what end. This is demonstrated a posteriori by all the recent scandals, both in the health field (Mediator) and in the environmental protection field (Monsanto), all of which are the result of logics that are foreign to a healthy conception of the public interest. Major trials — contaminated blood, asbestos, Mediator — implicating industrial lobbies that acted with the complicity of public authorities, or even more seriously, the upcoming trial concerning the enormous scandal of the sanitary management of Covid-19 in France, allow us to take the measure of the political dimension of these events. In this way, the population gains access to information that can be essential to a genuinely transparent public life, provided that journalists have the courage to do real investigative work.

In any case, this explains the success of conspiracy theory, without implying a reflection and a reaction against this drift. It remains to be seen what political and legal response can be given to this enormous question concerning society as a whole, namely truly accessible, honest and transparent public information, regardless of economic and political power issues. The truth is that it can only come from many quarters, both from the media and the political world. Aware of the growing difficulties of access to information inherent in the functioning of the industrial system, the public authorities adopted quite early on some very timid measures in favor of transparency, including the famous law of July 1978 on freedom of access to administrative documents, which was the subject of major litigation but left out many locked sectors, such as national defense, research and industrial and commercial secrecy. From this point of view, the task of tackling true transparency is enormous, as it concerns both the beliefs and interests that dominate our society.