The « change » « changes » everything and changes nothing 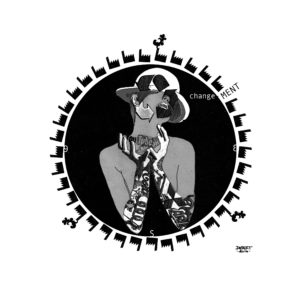 The perpetual change of the objects which surround us, their industrially programmed death, finds its success most certainly in a maintained taste of the fashion whose unconscious resonances appear, to reflect a little, obvious. To change objects constantly is to ensure that they will not outlive us; to change trees, buildings, streets, transportation, to reshape space constantly, is to refuse sustainability in favor of a falsely reassuring ephemerality. An ephemerality of the decor that sends us back in contrast a feeling of permanence.

This reassures the weak beings that we are, who cannot believe in their own death. As Freud explained:  » we have obviously shown a tendency to put death aside, to eliminate it from life. We have tried to pass it over in silence (…) it is that our own death is not representable to us and as often as we try to represent it to ourselves we can notice that in reality we continue to be there as a spectator. (…) From this point of view, as from so many others, the man of the first ages survives unchanged in our unconscious. Thus, our unconscious does not believe in personal death, he behaves as if he were immortal(1). « Capitalist society, which only perpetuates itself thanks to mass consumption — and the exploitation that allows it — certainly feeds on this subjective illusion of immortality. As Yvan Ilich said,  » In our century, the myth of endless consumption has replaced the belief in eternal life(2) « . However, this illusion does everything but help us to live. Because, again, according to Freud’s adage,  » if you want to endure life, organize yourself for death (3)  » . Modern life, which should give us time to prepare for it, takes us further away from it every day, despite an intimate conviction that cannot be taken away from us: that we are getting closer. So we continue towork(4) 40 hours/week, in a frantic rhythm, between the children to drive to school, the Saturday shopping in overcrowded places of abundance, and the organization of the next vacations, time of deferred work…

Also, in order not to change and see death, little by little, mark on our lives, we change ourselves: we lift our breasts, pull on the skin of our neck and face, inject botox in our foreheads… The cult of eternal youth, which is only a refusal of old age (hence also the contempt that our modern western societies show towards the old, whom they are happy not to name, calling them « old people »), is a way of making the world a better place. The term « old people » and « seniors », and therefore what will follow, is an admission of an external change — appearance — which is only a show: while things are « changing » at a frantic pace, we refuse to accept the change that is happening within us. The events of life that marked the woman’s body are refused for the same reasons: scheduled caesarean section to « not damage the body », breastfeeding refused for the same reasons. All this feeds and nourishes the cult of the eternal man (the transhumanists tell us that the man who will live 150 years is already born).

But this change is basically only change in continuity: we change to continue to grow; we grow to remain unchanged. We build the ephemeral, the durable bringing little profit to the agioteurs of all kinds. The change is then only continuity of what is: its deepening without foreseen end.

And since « our » perpetual change requires the destruction of human dignity, and since we can no longer deny it — globalization of information obliges in this case — we promise change because we must, if not cynical, promise it: slaves slaving to make our ephemeral clothes in Bangladesh die burned and crushed under the rubble of a Western factory, we promise the next day that everything will change. Illegal immigrants » are drowned while trying to reach « our » coasts, and promises of change are made (whether it is through the promise of a better reception or the one — more certain of effects — of a reinforced control). Progressive conservatism of our enlightened elites(5) who, from climate summit to climate summit, supported in this task by servile media, promise that this time it is the good one. We feign change because we cannot do anything else; the feigned and publicized will magically cancels the contradiction between the facts: we say that we are changing in order to forget that it is in fact our relationship with others and with nature that we must change, being satisfied with superficial aspects that change nothing.

In the same way, very paradoxically still, the media system concomitantly maintains the presentation of a past world as if it were still alive and well anchored, while advocating the elements of a modernity that has worked to destroy these ancient structures. « Along with their propaganda for Development, the various media of State, Commerce and Industry disseminate a whole imagery of the eternal Nature and Countryside. Some bucolic writers, TV civil servants, cast a nostalgic glance on Brittany or the Landes, endowed with all the aesthetic and moral virtues (…) from now on, in literature and the press, it is only a question of giving oneself roots. And the company that wastes it on its grave is celebrating the year of the Heritage. Fortunately, the meagre credits, which have been reduced this year, devoted to this purely cultural patriotism, are mainly given to media propagandists(6) « . Homogenizing thought, the relationship to others and to objects towards a total system, TF1 praises the local while invading it with a destructive globality. Wasn’t it Patrick Le Lay, former CEO of TF1, who said in a book: « for an advertising message to be perceived, the viewer’s brain must be available. The purpose of our programs is to make them available: that is to say, to entertain them, to relax them and prepare them between two messages. What we sell to Coca-Cola is available human brain time.

Since « our » perpetual change requires the destruction of human dignity, and since this can no longer be denied, we promise change because we must, if not cynical, promise it

He added: « Nothing is more difficult than to obtain this availability. That’s where the permanent change is. You have to constantly look for programs that work, follow fashions, surf on trends, in a context where in-training is accelerating, multiplying and becoming commonplace(7) « …