TECHNOLOGICAL REVOLUTIONS: WHAT IF FAILURE WAS THE NORM? 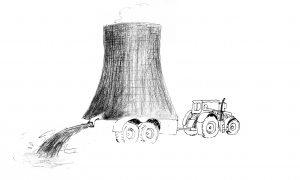 Those who ignore history are condemned to repeat the mistakes of the past. The adage, so often repeated but just as often ignored, has a relevance that should encourage more humility and caution among decision-makers of all persuasions, even when they share the same celebration of the benefits of technological innovation.

I invite Kairos readers to consider two major technological innovations that marked the twentieth century: the discovery of synthetic pesticides and their massive use as part of the famous green revolution of the 1950s and 1960s, and the production of electricity thanks to the mastery of nuclear energy in the 1950s. These two great technological innovations were originally presented as undeniable progress for humanity, all capable of solving major social problems.

The green revolution, thanks in particular to phytosanitary products (official and particularly valorizing name of synthetic pesticides) had for ambition to solve definitively the problem of the hunger in the world. Civilian nuclear energy (not to be confused with military energy) was to meet all energy needs throughout the world at a very low cost. Neither of these two wonderful innovations lived up to the promise they announced, even though they may have given the illusion of relevance at first.

The green revolution, led by the agronomist Norman Borlaug, who was awarded the Nobel Prize in 1959 for this remarkable achievement, was based on the systematic use of chemical fertilizers (N, P, K), selected seeds and pesticides. It has significantly increased the yields of agricultural production. But this could only happen at the cost of heavy investments, most often beyond the reach of the peasantry in countries suffering from insufficient food production.

Over the decades, we have logically witnessed a dispossession of the cultivated land traditionally exploited by small farmers for the benefit of a privileged class of farmers and especially by the agribusiness multinationals. Cash crops have supplanted food crops; peasants have become underpaid farm workers or have left the countryside for the slums.

Over the decades, reports from the FAO, the UN Food and Agriculture Agency, have shown that the number of undernourished people in the world is not decreasing.

In 1996, in Rome, the representatives of the United Nations at the World Food Summit committed themselves to reducing the number of undernourished people by half by 2015. This objective has obviously not been achieved. As it will not be reached the millennium goal (adopted unanimously in 2000) to reach this goal in 2020.

The reports published successively by Jean Ziegler, Olivier De Schutter and Mrs. Hilal Elver as Special Rapporteurs of the United Nations on the right to food point out the ineptitude and injustice of the policies in force to solve the thorny problem of undernourishment of hundreds of millions of human beings in the world today.

The green revolution and its high efficiency technologies are clearly at stake. If industrial agriculture has been perpetuated, it is at the cost of permanent and massive financial support from the great powers and to the detriment of farmers who are subject to the injunctions of the world market and prisoners of a growing debt. But what is worse is that this so-called green revolution has led to massive erosion of land around the world, widespread contamination of ecosystems with synthetic pesticides that are dangerous to living things, especially humans, and, paradoxically, the eviction of farmers from their role as food providers. Hilal Elver’s report also reminds us that pesticides kill 200,000 people by poisoning every year. His verdict is clear: it is necessary, all over the world, to reconvert agricultural practices to agroecology, which means abandoning pesticides. The vision of Norman Borlaug, the father of the green revolution, was presented as genius, but it collided with the ecological and social constraints of the real world.

NUCLEAR ENERGY OR THE UNBEARABLE BURDEN LEFT TO FUTURE GENERATIONS

In 1957, the Euratom Treaty, signed by the six founding countries of the European Community and still in force today, established a European Atomic Energy Community. It specifies that the mission of this Community is to contribute, through the establishment of the conditions necessary for the formation and rapid growth of nuclear industries, to the raising of the standard of living in the Member States and to the development of trade with other countries.

The European Community did not want to lag behind the two great powers, the United States and the USSR, which were engaged in an ambitious program to develop a civilian nuclear industry that would benefit from the technological acquis inherited from the atomic weapons production program.

Created a few years earlier by the UN, the IAEA (International Atomic Energy Agency) had given itself the mission of promoting the development of a civilian nuclear industry while guaranteeing, in principle, the watertightness between civilian and military uses of nuclear energy.

The fashionable adage at the time was euphoric: « nuclear energy is too cheap to meter ».

Ten years later, in 1968, the Nuclear Non-Proliferation Treaty (NPT) was designed to stimulate the development of civilian nuclear programs around the world, while reserving the ability to use nuclear weapons to the five historical nuclear weapons states.

The emergence of an increasingly scientifically supported challenge to the relevance of nuclear energy has not dampened the optimism of economists and experts from international institutions. In 1974, the IAEA envisaged a world nuclear energy production capacity of 3,500 GW by the year 2000, and in the best case scenario, 5,000 GW. The OECD was only slightly less optimistic in 1973 with its range of 2,900GW4,400GW.

Reality has been cruel to these current forecasters. In the year 2000, the world’s operational nuclear power generation capacity reached 350GW, one tenth of that considered in 1974 as most likely by the IAEA. It is true that two black swans had appeared in the meantime; the first in 1979, at Three Mile Island and the second in 1986 at Chernobyl(1).

Today, this generating capacity has reached an all-time high of 370 GW in 2019. In 20 years, the average annual increase has been 1 GW!(2). The third black swan, which appeared in 2011 in Fukushima, sounded the death knell for the last hopes of renewal of an industry that is fundamentally incompatible with life and incapable of guaranteeing the safety it claimed to ensure(3).

The determination of two pioneer states in the development of the nuclear industry (France and Russia) to deny the obvious and to continue the search for customers for their reactors is based solely on state aid and financing which will sooner or later prove to be unsustainable.

The nuclear KWh is not, and has never been, too cheap to justify new investments in the nuclear industry. It is now significantly more expensive than the wind or solar KWh. Only the scandalous unconsciousness of short-sighted or blind political leaders allows the survival of outdated and eminently dangerous production facilities.

The nuclear industry has only brought to humanity the irreversible radioactive contamination of vast territories, millions of human victims and the unbearable burden of enormous quantities of waste that we will have to try to manage as best we can for centuries.

Today’s digital revolution requires us to commune in the same fervor with all those who want to impose it for our good. No more than the green revolution or the nuclear revolution, it will not keep its promises.

It is unsustainable for three reasons:

The pandemic of the coronavirus which paralyses the world as I write these lines has at least one advantage: it allows us to measure the importance of the social link and to wonder about the rampant dehumanization of the world which is built.