Shall I put it on again? 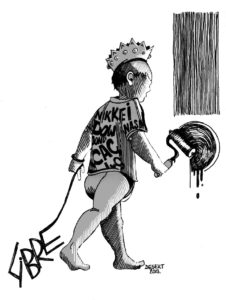 One will have appreciated the torrents of insanities that were poured out on the occasion of the passing of the torch from one king to the other. The press, the whole press has given, once again, the measure of its baseness and its submission before the authorities, civil and other, of this country. At the same time, the socialist prime minister, praised — when will he be beatified? — by the outgoing king, will have demonstrated his now legendary hypocritical blindness in a speech where lies and untruths competed with the most repugnant marks of allegiance to the monarchy. The latter still has a lot of good days ahead of it, satisfied that it can be of the perenniality of its multiple advantages, pecuniary and others. However, we will be happy to note that, on July 21, apart from a small portion of the good people of Brussels, the vast majority of the population did not overly express their attachment to the crown and to what they still consider to be its legitimacy. And then, we will observe that, this year again, in Liege, the fireworks of July 14 were followed and applauded by thousands of onlookers massed on the banks of the Meuse.

But let’s move on. This summer, in addition to the countless considerations related to weather conditions, has not lacked news more extravagant than the others and scandals of all kinds but presented by the press as perfectly common and ultimately beyond the reach of any form of judgment. Certainly, for example, one or another editorialist pretended to be scandalized by the fact that our American friends were sticking their noses into our business. Plumbers of all kinds, here as elsewhere, have well integrated the fact that the faster the information passes, the faster it falls into oblivion. As a reminder, and in order to refresh their memory, the ALLIA editions published a small booklet about ten years ago(1) written by a — real! — Duncan Campbell, a Scottish journalist, showed in great detail, with figures and documents, how the USA and its main allies (British and Australians) had set up a gigantic network of interception and processing of electronic and other data, private or commercial, since the beginning of the Cold War. The latest « revelations » about the system developed on the other side of the Atlantic are not really sensational; they simply confirm a state of affairs that was already there and has simply been adapted to the most modern techniques.

As for the millions and millions of messages of all kinds that are exchanged every day all over the world, coming from everywhere and exchanged by tens of millions of people, one may wonder, at the end of the day, what use can really be made of them. Except for inspiring some fears — legitimate to human rights defenders — it appears that this vast surveillance system is first and foremost a means among others to reassure and comfort the owners of the world that it is indeed the only one imaginable and worthy of being defended against, for example and among other threats, these nasty and very opportune terrorists, ambushed everywhere, ready to put the planet to fire and blood what, we saw it, didn’t provoke the least feeling of panic in the good people, who have many other worries.cis. One will recognize, in the publicity made to this affair as in others, the mark of the possessing classes and the cohorts of their servants who do not even have to dissimulate the nature of their lowly tasks. From now on, it is in broad daylight and without shame that the harmful projects of the merchants, money makers and owners are displayed, projects that no obstacle, wherever it comes from, can claim to stop.

The power and the extent of the means of control and manipulation of consciences put at the disposal of all forms of power are such that, truly, it is not so much the collapse of the idea of freedom that we are witnessing but, rather, the pure and simple disappearance of its concept and its effective practice. All that was necessary for this — in our countries spared from revolts, riots and murderous uprisings which are now the prerogative of distant populations and seen as prey to archaic, vain and ferocious disputes — was to implement the gigantic enterprise of cretinization and numbing of the spirits, without equal in history, which we discover, without being surprised, that it has perfectly achieved its goals. The fat and paunchy West, joined by the so-called emerging nations, persists in blindly pursuing the objectives dictated by « progress » and the necessities of an infinite expansion of everything and anything. This in an atmosphere where injunctions and invitations to almost permanent festivity dominate, with, in our country and everywhere else, during the whole summer, the innumerable open-air festivals and other city parades where enormous crowds of young people shake, exhaust themselves and get drunk to the sound of what we still call music. Which, in this case, concentrates in its emptiness and its unfathomable nullity, all the pretensions to the liberation and to the advanced knowledge of life that the miserable gadgets born from the research promise and the applications it opens up to the full satisfaction of the markets and their shareholders.

But, even more than these observations, all in all a great and perfect banality, the beautiful season will have at least given us great opportunities to laugh out loud at the comical show to which our luminaries and those of our neighbors will have allowed us to attend. Total spectacle, sound and light, historical tirades, hiccups and vomit, nothing was spared. From François Hollande to his Minister of the Interior, passing by our inenarrable regional comedians (there is a nest somewhere?) and a few others, there would be enough to put together a first-rate show to be broadcast in prime time on television channels. In this case, we would have no other choice than to leave this work in the hands of those who excel in this field: the journalists and marketers who shamefully occupy almost all the media space. We can be sure that this insane mush for the use of neo-citizens would be properly and promptly revised and that it would be turned into a conforming and easily digestible pedagogical tool.

Because obviously, again and again, it is a question of correcting the situation and, consequently, of lying brazenly, distorting reality, fiddling with the figures, and making a show of it. As with these ridiculous bomb threats in metro stations and train stations that are evacuated with great fanfare, where « suspicious packages » are surrounded by cops, military-deminers, spied on, opened with a thousand precautions and which turn out to be nothing more than poor and innocent bags or suitcases containing nothing at all that could lead to panic. Like the kind Walloon nationalism of the one against the economic patriotism of the other… On three, we have fun: one, two, three… Go!!!