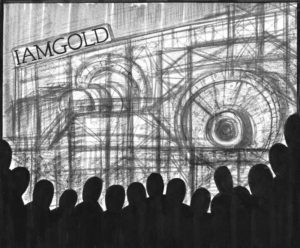 « The crisis has always existed. And it will get worse every time the popular masses are more and more conscious of their rights against the exploiters. There is a crisis today, because the masses refuse that the wealth is concentrated in the hands of a few individuals. There is a crisis because a few individuals deposit in foreign banks colossal sums of money that would be enough to develop Africa » declared Thomas Sankara, president of Burkina-Faso, at the summit of the Organization of the African Union on July 29, 1987. He was murdered two and a half months later. This speech opens the film « Prosperity Underground » directed by Ronnie Ramirez (www.zintv.org)(1)This book offers a vivid view of the current mining industrialization in Burkina, a key sector of activity for this country ranked among the poorest in the world.

The film is shot in Essakane, in the Sahelian region of Gorom-Gorom, in the north of Burkina Faso.

On the one hand, the artisanal gold miners, who dig the stone with pickaxes and small machines. When a quartz vein potentially indicating a gold vein is located, dozens of small drillings are carried out to extract the precious metal whose revenues will allow the entire community to live. For the gold miners, each hole is a small business. All those who dug, invested in the tools, the land, who made the operation possible participate in the success of the operation and receive a share of the gold sale.

In Essakane, villages have sprung up around gold mining areas discovered by gold miners as early as 1985: workers and their families have created communities from the cities or from the fields, from Burkina Faso or from neighboring countries. Traditionally farmers and stockbreeders, they have been able to make fertile the arid land under which a few rare water sources are accessible. Fine balances have thus been created between communities and their environment where they have been able to find the necessary to live and prosper.

The other side arrived in November 2008 in the form of the Canadian multinational IAMGOLD Corporation. IAMGOLD is one of the world’s leading gold mining companies, active on three continents(2). The approach of the mining transnationals could not be simpler: appropriate land where the ore is extractable in sufficient quantity to be profitable, take it all and leave. The process is largely automated: in Essakane, trucks as big as buildings turn 24 hours a day, guided by GPS in a gaping hole enlarged by dynamite and a trimming machine, each tooth bigger than a man. The earth is crushed, heated, chemically separated in a plant the size of a small town from which ingots are flown out every Monday — the mine has its own airfield.

Employees are housed in an air-conditioned hotel cut off from the country by a secure compound, where fresh salad and maple syrup arrive by air.

The meeting between these two parts is the subject of Ronnie Ramirez’s film, which shows the nature of this meeting with all the more force because of its stripped-down style.

A third actor should be involved: the Burkinabe State. It has been and remains so, in a special role, by adapting its mining code in 2003 to facilitate foreign investment in the country’s gold mining industry, and by obtaining 10% of the IAMGOLD Essakane company created for the occasion. The new mining code is very favorable to large foreign companies, which find particularly rich subsoils and an accommodating government. In 2009, gold became Burkina Faso’s leading export product, accounting for 10% of GDP and revenues of 67 million euros(3). The government, which presents Essakane as a model of win-win success, has decided to grant numerous mining permits for the coming years.

Florence Kroff, from FIAN (FoodFirst Information and Action Network) Belgium (www.fian.be), points out that when it comes to human rights, the state is the primary duty bearer. It has the duty to enforce rights, to protect citizens from actions contrary to these rights, and to guarantee the effectiveness of rights. The Belgian section of FIAN, in collaboration with FIAN Burkina-Faso, actively supports the people of Essakane by following its own mandate: to support the people in their struggle for their rights, never to substitute for them, not to decide without them. Florence Kroff explains: « In Essakane, there is a real failure on the part of the state and local authorities. There is no control of the proper application of the contracts concluded with IAMGOLD, no support or assistance to the local populations who clearly need it. The inhabitants are almost completely unaware of their rights, they think they are not entitled to anything ».

In November 2009, 13 communities, representing 2,562 households, 11,563 people were relocated to make way for IAMGOLD and seven new villages were created.

In return, the Canadian transnational had to build houses, schools and wells. The houses were insalubrious, the schools 6 in number, the wells dysfunctional. Following the mobilization of the inhabitants, supported by FIAN, IAMGOLD agreed to rebuild houses and schools. While hand pumps have been installed at one site, another « new » village still has no well. Water is delivered by a tanker truck chartered by the mine. By expropriating the inhabitants of their villages, IAMGOLD has also deprived them of arable land: the desert is everywhere, the land is barren. The newly allocated land does not allow the farmers to produce enough food for everyone. The water is sometimes contaminated by the mine’s pollutant discharges, particularly mercury. Pointing to a slope adjacent to the mine, a farmer explains in the film that « if an animal eats the grass, it must be slaughtered and buried on the spot, it cannot be eaten. And the earth of the dune falls on the field ». While children are being born with deformities, the villagers explain that before the mining companies arrived, they lived without chemicals.  » What will become of us and our children? » they ask as IAMGOLD expands its mining area at the end of 2013 from 32 tons of gold/year to 56 tons/year.

A mine has a limited lifespan: after certain thresholds, it is no longer profitable and is closed. For Essakane it is in 2025.

At that point, farmers will no longer have any land to cultivate. The few local workers, no more work. There will be no more tankers, and the water resources will surely be polluted with mercury. The gold miners will have no more gold to find since IAMGOLD will have taken everything.