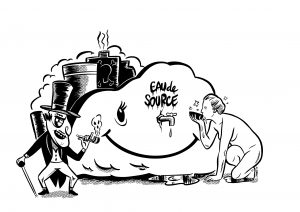 Fake news or misinformation aimed at manipulating public opinion are increasingly denounced by politicians, journalists and intellectuals concerned with the proper functioning of democratic institutions. Social networks are widely blamed for their ability to spread information almost instantaneously that turns out to be totally false afterwards. History teaches us that the most damaging misinformation is not limited to the nonsense spread unrestrainedly by social networks. They also come from politicians themselves.

When George W. Bush and Colin Powell made the argument that Saddam Hussein’s Iraq had weapons of mass destruction, it quickly became clear that this was false information designed to justify the invasion of Iraq. The consequences of this deliberate misinformation proved disastrous for the entire Middle East, which has been completely destabilized since then. Boris Johnson’s and Donald Trump’s gross lies do not stop them from wielding power in their countries with impunity either.

Having devoted the summer months to writing a book on the problem of pesticides(1) and in particular on the evolution of the policy that has allowed their massive use since the 1950s, I was once again confronted with systematic misinformation and even with a particularly scandalous state lie. The case of the toxic oil syndrome, which shook Spain in the 1980s, was a real tragedy for the many victims of an unprecedented food poisoning. A thousand deaths and more than 25,000 people seriously affected, many of them disabled for life, such is the toll of this dramatic poisoning.

The first case of poisoning occurred on May 1, 1981 in Madrid (a young boy of 8 years old died in a few hours in his mother’s arms). The medical profession is powerless; no treatment proves effective and the deaths accumulate. More than a month after the onset of the disease, a doctor, director of the Children’s Hospital of Madrid, announces that he has identified the cause of the disease. The government, quickly convinced of the validity of the diagnosis, informs the panicked public opinion on June 10 that the epidemic is due to an adulterated oil.

This thesis of adulterated oil seems convincing. In fact, commercial companies were importing rapeseed oil, which was much cheaper than the local olive oil. In order to avoid competition deemed harmful to the marketing of national olive oil, rapeseed oil was reserved for industrial uses. To do this, it was made unfit for consumption by adding aniline. Some unscrupulous manufacturers marketed it anyway. Toxic aniline residues are considered to be the cause of the syndrome. Thirteen business leaders were involved, arrested and imprisoned in mid-July. However, not everyone is convinced by the official diagnosis, especially since the adulterated oil had been on the market for years. It is not clear why it suddenly became so toxic that it caused a hundred deaths in 4 months. However, the official thesis was confirmed in 1983 during an international conference organized in Madrid, under the auspices of the WHO. Despite the reservations expressed by many scientists, the epidemic is officially referred to as Toxic Oil Syndrome (TOS).

In 1989, after two years of hearings, the trial of the toxic oil producers ended with the defendants being sentenced to heavy penalties. This is despite the fact that the judges emphasized that the toxic agent responsible was still unknown: the levels of aniline present in the oils were too low to explain the health damage. In the meantime, research by Barcelona epidemiologists had shown that the consumption of very large quantities of adulterated oil in Catalonia had not caused a single case of illness. On the other hand, many people who had never consumed adulterated oil had died from the syndrome. These facts have been deliberately ignored.

Likewise, the field investigation work carried out by the former director of the Hospital of Madrid and his team allowed them to conclude, with certainty, that the cause of the poisoning was the ingestion of tomatoes treated with organophosphate pesticides. All the symptoms observed were perfectly consistent. The tomatoes originated in the region of Almeria in the far southeast of Spain, which had become a mecca for intensive fruit and vegetable production. This production took place with the massive contribution of pesticides and in particular of a Bayer product, Nemacur, whose active substance is an organophosphorus, fenamiphos, recognized thereafter as particularly dangerous. In high doses, it can cause respiratory paralysis and death.

It has become obvious to any critical observer that the truth has been deliberately suppressed by the Spanish authorities for both economic and political reasons. For multinational agrochemical companies, the revelation of mass poisoning by a pesticide would have been a commercial disaster. For the Spanish authorities, Almeria represented an economic miracle, as it produced fruits and vegetables to be exported throughout Europe. Destroying this image in the eyes of the world was unthinkable. It was better to give credence to the fable of a swindle carried out by small industrialists with little influence and to forget the thousands of victims abandoned to their fate.

One would think that such a drama and such a travesty of the facts would no longer be possible 30 years later in a European country. Perhaps such a gross state lie is less conceivable today. This does not prevent systematic disinformation, with the complicity of experts whose intellectual proximity is proven. PAN Europe’s reports on this subject are edifying, especially the one by Hans Muilerman published in 2018(2). It demonstrates the influence of such experts on the application and even the drafting of European regulatory texts on pesticides. Thus, political leaders can take refuge in the shelter of texts supposedly inspired by scientific objectivity to claim the non-toxicity of suspect substances maintained on the market and disseminated in the countryside.

The same experts, directly or indirectly sponsored by the pesticide-producing multinationals, have the ear of the media and lend their support to the words of those they have inspired. Misinformation includes declaring a substance environmentally acceptable while its degradation products (metabolites) are not studied. It also consists in not measuring the concentration of dangerous substances in the water, nor that of their metabolites, and thus the legal criteria of potability are respected.

Clearly, it is sufficient not to look for the presence of a dangerous substance to be able to affirm that the environment concerned is of irreproachable quality or that the damage to health observed in the field has nothing to do with this substance.

To tell only part of the truth is also to misinform. Not wanting to know when one has the adequate scientific and technical means is another method of disinformation, admittedly more subtle, but widely used to clear destructive pesticides.