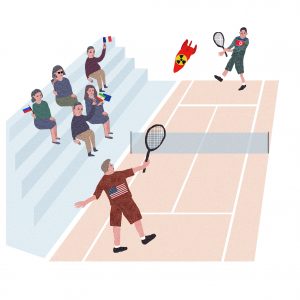 The question may seem trivial in our country, which is preparing to renew its fleet of military aircraft carrying nuclear weapons. It is, however, of real topicality, in spite of the deafening media silence that hangs over everything that calls into question the so-called nuclear deterrent. On December 23, 2016, the UN General Assembly adopted the historic resolution L41 on the advancement of multilateral nuclear disarmament, which calls for a United Nations conference in New York in 2017 to negotiate a legally binding instrument to ban nuclear weapons, leading to their total elimination.

This conference began last March, with a first session of 5 days (March 27–31), a second session taking place from June 15 to July 7 under the chairmanship of the Ambassador of Costa Rica to the UN, Elayne Whyte Gomez. This presidency is a good omen when one remembers that Costa Rica has made the political choice to renounce all armed forces. The final vote on the text of the new Treaty is scheduled for October.

HOW DID THIS PROCESS GET STARTED?

It was at the initiative of Austria that the draft text was tabled in the UN General Assembly on September 28, 2016, and was adopted on December 26; co-signatories were Brazil, Mexico, Ireland, South Africa and Nigeria. Adopted by a very large majority (113 votes in favour), it was nevertheless rejected by 35 member countries, 13 of which chose to abstain.

Of the nine nuclear-armed states, five voted against: the United States, Russia, France, Britain and Israel. Three abstained: China, India and Pakistan. North Korea once again surprised all observers by voting in favor. All NATO countries, notorious satellites of the United States, aligned themselves with their protector by voting against, with Belgium confirming its status as a good student. Only one bad pupil, the Netherlands, abstained.

Realistically, opponents will not hesitate to put the brakes on the UN process in the coming weeks and try to delay the adoption of the draft ban. They understood the importance of the event. A ban treaty may not lead to the immediate elimination of nuclear arsenals, but it will delegitimize the possessor states by reducing them to the status of delinquent states.

The international community, when it comes to nuclear weapons, can indeed be described as both schizophrenic and hypocritical. The Treaty on the Non-Proliferation of Nuclear Weapons (NPT), which dates from 1968 and entered into force in 1970, endorses and legitimizes the possession of nuclear weapons by a few major powers and prohibits others from acquiring them. In Article VI, it pretends to program nuclear disarmament since « each of the Parties to the Treaty undertakes to pursue negotiations in good faith on effective measures relating to cessation of the nuclear arms race at an early date and to nuclear disarmament and on a treaty on general and complete disarmament under strict and effective international control. Fifty years later, the earliest date has still not been set and three

Israel, India and Pakistan, non-signatories to the NPT, have acquired nuclear weapons without facing international sanctions.

To note the ineffectiveness of the Non-Proliferation Treaty and to move to a more proactive attitude is therefore in no way useless or dangerous, as the advocates of immobility, i.e. the Western warlords and those who are satisfied with their status as « protected » states, would have us believe. A ban treaty cannot be called unnecessary in any way. It will finally give nuclear weapons the legal status they deserve: that of weapons of mass destruction with catastrophic humanitarian consequences and which, as such, must be banned.

States supporting the draft treaty rightly note that it will fill the legal gap between the prohibition and elimination of nuclear weapons. The 1972 Biological Weapons Convention and the 1993 Chemical Weapons Convention have done this by banning these weapons and ordering their total elimination, respectively. This project can even less be considered as dangerous, as our Minister of Foreign Affairs claims.

Only those who believe in the relevance and effectiveness of nuclear deterrence can dare to make such statements. While there has certainly been no nuclear war, to conclude that this is the result of the policy of deterrence is questionable, to say the least. Indeed, on several occasions, we have narrowly escaped disaster. This was the case during the Cuban crisis in 1962, when tensions were at their highest between the United States and the USSR. In 1983, an exceptional event that had been hidden for a long time, because it was embarrassing for all the protagonists, made it possible to avoid the third world war. On the night of September 25–26, Stanislas Petrov, the commander of a Soviet air base, refused to obey orders to respond to an atomic alert constituted by the detection of American missiles pointed at the USSR.

Clearly, nuclear deterrence offers no guarantee of perfect functioning. The fact that it is also based on a false premise is enough to invalidate it. How can one believe in the absolute rationality of the behavior of heads of state who hold the enormous power to initiate a nuclear conflict or to retaliate against what they interpret as an extremely serious threat?

Who could claim today that Donald Trump or Kim Jong-Un are free of irrational impulses or overreactions? The truth is that we are all under constant threat from a policy that claims to protect us.

No, nuclear deterrence does not protect anyone from apocalyptic risks; it imposes them on the entire planet, on the states that possess them as much as on others. As the French general Francis Lenne rightly explains in a book recently published online (see www.armesnucleairesstop.org), nuclear weapons are not weapons in the military sense of the term, they are not usable for self-defense but for self-immolation. They respond to a need to assert a simulacrum of power, to belong to the restricted group of those who want to play in the big league.

The challenge now is to force the debate among the nuclear weapon states and their allies. The recent French presidential elections clearly show that the political class, all tendencies included, does not want or does not dare this debate. The unanimous silence of the media is equally revealing of the state of mind of the self-proclaimed elites. The adoption of a ban treaty should change this. It is not won but all hopes are allowed. As the rhetoric of budgetary austerity and austerity invades the public arena, it is becoming increasingly clear that spending huge sums(1) to give the appearance of power will become more and more socially unacceptable. If, in addition, the inglorious status of delinquent in the eyes of the international community appears, we go from the unacceptable to the unbearable.