NATO, an organization of defense or aggression? 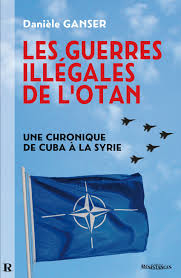 A very good news for those who want to better understand international relations, so-called humanitarian wars and other geopolitical manipulations: the last book of the researcher and pacifist activist Daniele Ganser, « NATO’s Illegal Wars » , has just been translated and published in French. This book shows how NATO countries are sabotaging the UN and what this institution could have done for peaceful relations between nations. In doing so, the book gives a rich and synthetic overview of a whole series of Western wars since 1945, their real goals, as well as their disastrous consequences for the people.

Ganser rigorously, but not heavily, exposes how some of the NATO countries have systematically disregarded one of the fundamental principles of the UN Charter: the prohibition to engage in war unless it is defensive or authorized by a Security Council mandate. As the book shows, in addition to the ravages of the wars in question, this contempt has also fundamentally discredited the UN. Not that Ganser is under any illusion about this institution and its serious shortcomings. He points out, of course, the revolting fact that only the five permanent members of the Security Council have the right to veto (five members, three of which are in NATO, and four of which are northern countries). Nevertheless, he believes that even if it should be reformed, this institution makes sense because it is the only organization to which all countries belong and which aims at peace between nations. A positive and very important aspect of the UN, according to Ganser, is the fact that it offers a space where representatives of all the countries of the world can discuss conflicts.

Whatever one’s view of the UN, the book is of great interest for a number of reasons:

Ganser is a recognized expert on the subject — a renowned historian and professor at the University of Basel, he has studied the Western wars for both his dissertation and his doctorate; the value of this work has been recognized in the academic world — and it is held in high esteem by, among others, a figure such as Noam Chomsky. Thus, Ganser can hardly be accused of being an extreme leftist, for example. This does not prevent the whole of the French-speaking classical media from ignoring, until now, the new book of this researcher. This is not surprising, since« NATO’s Illegal Wars » deals with, among other things, things that are still very much in the news, where our governments are involved — unlike other publications by the author that had a real media impact (in particular, « NATO’s Secret Armies »).

In spite of the recognized value of Ganser’s work, the entire French-speaking mainstream media ignores this researcher’s new book

Another important interest of the book: while being very critical, Ganser also highlights many facts and actors that are sources of hope, which helps the reader not to fall into such shortcomings as anti-Americanism, or a rejection of the West as a whole: American diplomats who told the truth despite the risks, members of Western secret services who revealed facts that compromised their government, journalists who tried to do their real job, etc. He also insists on the fact that a whole part of the inhabitants of the countries involved in the treated exactions fight against these exactions, once they have been able to learn about them; and this, of course, including in the USA (a country where the author has traveled and sympathized with many people). This positive attitude is even more evident in Ganser’s oral communication (many of his interviews and lectures are on the Internet): he speaks with a calmness, humor and humanism that greatly lighten the subjects he deals with, without detracting from their gravity.

Another interesting point is that Daniele Ganser’s approaches are as apolitical as possible. However, many authors or associations denouncing wars such as those in question do so by accompanying their presentations with highly politically tainted analyses, which very often strongly contributes to restricting their audience (whatever the value of their approaches and analyses elsewhere). This is all the more true since we are dealing here with subjects which, when approached critically, often arouse the suspicion of « conspiracy », right from the start; this seems quite inevitable, however, if we want to talk about the most significant facts; facts which Ganser treats without hesitation, thus avoiding the blurred positions of those who, precisely, are afraid of being labelled « conspiracy theorists ». For example, he states bluntly that the United States is an empire and that the other NATO countries behave, on the whole, like vassals of this empire, at the level of their governments. Statements that he carefully supports.

At the same time, the author does not fall into one-sided visions: while he radically criticizes Western aggression against the countries concerned, he does not ignore the abuses of the powers of these countries, when such abuses exist. However, it shows that the wars in question, far from helping anything, terribly worsen the situations concerned.

This book is a real treasure, for history lovers sensitive to the stakes of peace movements: after very concise presentations of the UN and NATO, the chronicle begins with the putsch perpetrated in Iran, in 1953, by the US and British powers, against a democratically elected and very progressive government; the book ends with the analysis of the very active contribution of Western powers to the destruction of Syria, under the totally fallacious pretext of a will to democratize. In the meantime, Ganser takes us through the war against Vietnam, the support of a terrorist guerrilla in Nicaragua by Washington, despite two convictions of the US government by the International Court of Justice, the invasion of Iraq, or the precipitation of Libya into chaos as a result of Western « intervention » (aggression). In all, thirteen illegal wars conducted by NATO countries are described in a synthetic and sufficiently rich manner, in a very readable and very often exciting style.

Thus, in only a few hundred pages, this book provides a great deal of data necessary to understand the war policies of our countries. Understanding is essential if we are to try to contribute to ending these policies. This is as necessary as ever, if not more so. Indeed, we are only a day after the destruction of Syria, which followed shortly after the destruction of Iraq, Libya, Yemen, etc. Destructions in which a part of the West has played (or still plays) a central role. However, as soon as the last of these destructions was completed, unrest appeared and worsened in Iran. Of course, as is often the case, the social situation of this country and the mistakes of its government are certainly important causes of this unrest. But it is very difficult to imagine that Western powers, at least the US, will not also play a role, or that they will not try again to take advantage of the situation. At the very least, there is a very high risk of this happening. Indeed, Iran has been for years on a list of countries where powerful people in the United States are aiming at a « regime change ». At least that’s what Wesley Clark said; again, he’s not an extreme leftist, but a US general who held the highest position in NATO. This information was relayed by the Guardian, which is anything but a small marginal media. On the website of this newspaper, we can read:  » According to (…) General Wesley Clark, just weeks after 9/11 [2001], a memo from the US Secretary of Defense revealed the plan « to attack and destroy the governments of 7 countries in 5 years », starting with Iraq, and then dealing with « Syria, Lebanon, Somalia, Sudan and Iran »(1).  » In a subsequent interview, the article continues, Clark explains that this strategy is based primarily on the desire to control the large oil and gas resources of the regions concerned. However, after what has happened in the countries mentioned, it seems very clear that the facts confirm these statements, at least for part of the plan concerned. And, just as obviously, it is not Donald Trump who would disapprove of projects of this type with regard to Iran.

Ganser’s latest book can really bolster the action and credibility of those who want to help put an end to these nightmares, or at least attempt to.

Translated from the German by Laurent BÉNAC and Jonas LISMONT