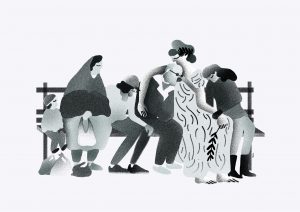 This year will be remembered. It leaves behind a beautiful package of small, medium and large disasters of all kinds. And the omens, as far as the current one is concerned, are not very encouraging. And, all things considered, it is absolutely useless and ridiculous to talk about going from this to that or from one year to the next, from a few difficult moments to others that could only be a little less painful. Of course, all of us, at the stroke of midnight, wanted to wish our loved ones and friends a beautiful and wonderful year, filled with happiness and prosperity; this is part of the tradition and it would be foolish to mock it. But, for many of us, these wishes were tinged with a little sadness mixed with diffuse fears. The passage to the new year is not likely to change much to the ambient reality and to the sometimes catastrophic situation in which more and more people around us find themselves. As for the rest, and more generally, one cannot fail to observe the extent to which events throughout the last year and almost everywhere in the world have struck minds and consciences.

Whether it is the war waged against the madmen who, in the Near and Middle East, slit throats, mutilate, and rape, and of which it is obvious that we will never be able to put an end to them by the means currently used; the imbecilic massacre of the cartoonists and journalists of Charlie-Hebdo and the murderous attacks of last November in Paris, all of this and many other tragedies will have left a lasting impression on us. For there has been, there is and there will continue to be the painful problem of thousands of refugees shuffled from one corner of the old continent to another, welcomed and then rejected and abandoned by all and by all assistance. Finally, there is still and always the contempt of the powerful for the dregs of the earth, for the millions of miserable people in the great American power, for the millions of unemployed here in France and everywhere in Europe. And then, there is the terrible and worrying turn to the right of a part of the disoriented public, manipulated by the nauseating speeches of certain political leaders and by the infectious propaganda insidiously distilled by the media at the behest of their shareholders. We see the consequences of this permanent bludgeoning in the trials made to the Muslims welcomed in our country for a long time, who are asked to take a stand in front of the crimes perpetrated by the supporters of the religion which is common to them, but deviated and become a weapon of war against the miscreants; We are witnessing the hateful demonstrations of fascist crowds in Germany and, in part, in our northern neighbors; mosques, in France, are desecrated and set on fire, innocent citizens, on the basis of their appearance or their supposed belonging to such and such a religion, are insulted and attacked.

In France, after the emotion provoked by the latest Paris attacks, the entire political class, with rare exceptions, applauded President Hollande’s announcement of a state of emergency that gave rise to hundreds of police interventions in all circles vaguely suspected of connivance with terrorism. Brave organic farmers, peaceful citizens, people from associations and groups of all kinds arrested, put in custody or placed under house arrest for the most absurd reasons, which had nothing to do with the fight against terrorism. Here, on the same grounds and after vague warnings of imminent attacks, the federal government has put in place measures supposed to protect a population which, to say the least, has never given the impression of living under a climate of terror. It was all very well to close schools and metro stations, to paralyze the capital for several days, to bring the army into the streets and to multiply the effects of announcements, but nothing was done: the terrorists — terrorized, perhaps, by so much determination — did not for a single moment spread terror, nor did they really give the impression of wanting to. At the time of writing, the brave rednecks, supported by policemen armed with the same machine guns, are still on duty everywhere, people are chatting with them, calm is the rule. We are pleased about this, of course, but we wonder whether the threat was really worth taking such measures and how long they will be in force. In addition, and to put a little layer, we also had the opportunity to attend the lamentable and comical tributes to the victims of the Paris attacks, including the one that decimated the ranks of the comrades of « Charlie », tributes during which have accumulated the blunders, staid speeches and crocodile tears paid by an elite in need of recognition. We will not forget the image of the President, the Prime Minister and the members of his government in a row at the Place de la République, deserted by the good people who had, we can assume, other concerns. That he shares with others, who are also confronted with problems and challenges of all kinds that are beyond their control.

But the list is long of this mess, which is universal; one would not finish detailing it and it would be in vain. We are only obliged to note and deplore the extent to which we have reached the point of disintegration of everything, due to the unconsciousness of the elites or so-called elites, and due to the unconsciousness of those — the famous 1% — who, no matter what we may say to them, continue to make this world more and more uninhabitable and inhumane. The events of the first weeks of this new year do not augur that the world is ready to change its basis and, as we know, miracles do not exist.