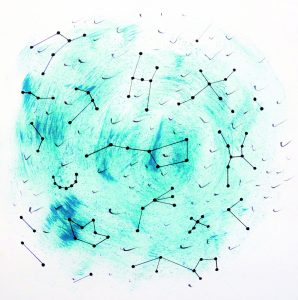 For a little over a century, artificial lighting has been an integral part of our lifestyle. Over the past few decades, both indoor and street lighting have developed at an accelerated pace. Human activities are most often inseparable from artificial lighting to the point that, except in the open country, darkness has become rare. While this in principle increases the sense of security for humans, the consequences for animal species adapted to nocturnal life cannot be underestimated. At a time when alarm cries are multiplying concerning the collapse of biodiversity, it is not useless to draw attention to the disturbances caused by artificial lighting on wildlife, birds and insects in particular.

Let’s mention first the migratory birds which, for the majority of them, travel at night. Species such as passerines and ducks use the position of the stars in the night sky as well as the earth’s magnetic field as a guide to orient themselves along well-defined corridors. The night light and light halos that form around cities cause birds to lose their ability to orient themselves, causing collisions with each other and with urban structures. They are, strictly speaking, disoriented.

Insects, on the other hand, are affected because of their attraction to light. The case of moths is well documented. Thus, the skull and crossbones sphinx, one of the largest butterflies in Europe, has become very rare, a victim of insecticides but also of light pollution. Of course, we cannot forget to mention the fireflies that communicate with each other by emitting their own light. Night lighting disturbs their behavior and jeopardizes their ability to reproduce. Another species also suffers particularly from the night light; this one disturbs indeed its hunting habits. It is the great rhinolophus, a bat, unable to hunt when the darkness is not total.

It is clear that the reduction of night lighting by eliminating superfluous equipment and infrastructure and especially by self-limiting non-essential needs, such as prolonged illuminations or commercial signs in uninterrupted operation, becomes an ecologically justified political choice. However, the current policy to reduce electricity demand does not mention this type of response. Instead, it consists of turning to new technologies that are considered more efficient in terms of energy. These are LED’S (light-emitting diode lamps) presented as having many advantages, the main one being a high energy efficiency. LED’s have a life expectancy that is much longer than that of other lighting systems, in addition to various technical advantages that explain their growing success. Today, LED’s have conquered the market for our domestic uses as well as for public lighting and commercial applications.

Is it a miracle solution? One would be tempted to believe it. I must admit that I myself was seduced by such a promising technique in terms of energy. However, we must temper our enthusiasm and take into consideration the qualitative aspect of the light emitted by LED’s. As already stated by ANSES in 2010 in an expert report(1), LED lighting is totally different from other lighting techniques by its health aspects. On the one hand, LED’s have a much higher luminance than other light sources(2) because of their point-like nature (luminance is the light intensity per unit of emitting surface). This high luminance can cause potentially dangerous glare situations for the eye. It is therefore essential to avoid any use of LED’S that does not hide the LED’S from the direct view of users. On the other hand, the spectrum of the emitted light is characterized by an imbalance in the blue part where appears an important intensity peak. Blue light is particularly phototoxic for the eye. In addition, the light of LEDs, fundamentally different from natural light, with its imbalance in the blue part, exposes to a risk of disruption of the biological clock and consequently of circadian rhythms. This disturbance of the biological clock can induce metabolic and thymic effects (depression, mood disorders, insomnia…). As far as public lighting is concerned, it is in my opinion not relevant to rush into a policy of generalized use of LEDs.

As Francis Leboutte wisely pointed out(3), the announcement made by the Walloon Minister in charge of energy to replace discharge lamps by LED lights on the Walloon road network is not justified in any way in terms of energy choice. It also worsens the situation in terms of biodiversity protection. German scientists, comparing the advantages and disadvantages of different types of road lighting, have shown that the effects on insects of the quality of the lighting are significant. In particular, sodium vapor lamps, those that should give way to LED’s would even be beneficial with their orange light…

For domestic applications, the choice of LED’S deserves reflection in view of the qualitative disadvantages highlighted, especially since the technology is evolving very quickly, which justifies a fortiori caution. This caution must also be practiced with regard to exposure to screens. Indeed, LEDs, because of their performance but also their small size and shock resistance are widely used for the backlighting of computer screens, cell phones, televisions, digital tablets and smartphones.

Several recently published studies (2017–2018) report a drop in the secretion of melatonin, the biological clock hormone, in students and children exposed to tablet and smartphone screens in the evening, with the result that sleep is severely disrupted. We are facing a serious health problem. Today’s children and teenagers spend far too much time in front of screens. For some, this leads to a real addiction, potentially very damaging to their health(4). If to the already well-documented risks due to microwave exposure and cognitive overload are added the risks for vision and the disruption of circadian rhythm, there is an urgent need to act through a serious information campaign. There is also an urgent need to reconsider the validity of education in schools based on the permanent use of screens and digital technologies.

We can see that light pollution, rather than regressing, is on the way to increase and to affect children first, that is to say the most vulnerable among us.

A final note to point out that the current exposure limit values for blue light risk are defined to avoid acute damage to the retina. They are not adapted to protect populations from health effects related to repeated exposures over long periods.