INDUSTRIAL FOOD: THE SCANDAL IS PERMANENT 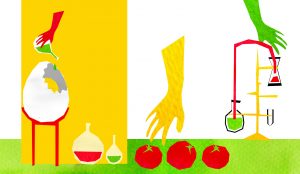 The summer that has just ended has seen a new food scandal. The scenario is classic. At the beginning, an obvious scam: the fraudulent use of a product forbidden by the sanitary and commercial regulations. The product in question is fipronil, a very effective insecticide authorized for the treatment of domestic animals but banned for farm animals. It was the Dutch firm Chikfriend that mixed Fipronil with other substances, including other banned products (such as Amitraze, another insecticide), to market a remedy, Dega16, effective in the fight against red lice in laying hen « farms ». The Belgian company Poultry-Vision, distributor of these products is also involved: 6,000 liters of prohibited products were found in its premises.

THE SPECTACLE OF SURVEILLANCE

The sequence of events is equally classic. On 20 July, the Belgian Federal Agency for the Safety of the Food Chain (FASFC) alerted the European authorities responsible for informing the EU countries. It should be noted that this Agency had already been alerted on June 2 by an Antwerp operator of the existence of the fraud. When it comes to implicating industrialists, one has to move slowly. As time went by, the list of affected countries grew longer and longer. On August 31, the European Commission announced that 34 countries, including 22 in the European Union, were concerned by the purchase of batches of contaminated eggs. It recognizes at the same time that the fraud began in September 2016 … As expected, the statements of the authorities adapt to the updated level of information. Certainly, many processed products, contaminated by fipronil eggs, have been distributed and consumed but the consequences for health are probably (!) negligible!

What is obvious is that the free trade of agri-food products is not accompanied by effective monitoring and control. Let’s remember the previous episode of frozen « pure beef » lasagna, four years ago already. Two traders, four companies and five European Union countries have been caught up in the turmoil over lasagne sold by Findus after a Romanian slaughterhouse delivered horsemeat that was renamed beef by the French and Luxembourg intermediaries. The fipronil affair confirms that no lessons have been learned from the previous episode. Of course, one could be more positive by noting that a scandal every four years is not that serious. However, this would be very naive. The well known media scandals hide a daily reality that is far from acceptable. Free trade within the framework of the World Trade Organization, with enormous disparities between countries in terms of environmental protection, health and social rights, generates more than dubious practices on the part of transnational agri-food companies. These practices are all the more pernicious and dangerous because they are perfectly legal.

The case of tomato paste and its international journey to our plates is exemplary in this respect. It was the subject of a remarkable investigation by journalist Jean-Baptiste Malet, recently published(1); this investigation reveals a permanent scandal that few of us suspect when we swallow a pizza or add ketchup to our familiar dishes. Judge for yourself by looking at these few elements. To date, China is the world’s largest exporter of tomato paste. Two giant companies, Cofco Tunhe and Chalkis, are flooding the world market with industrial tomato paste. China has specialized in highly concentrated products because the higher the dry matter content of the pulp, and the less water it contains, the lower the transportation cost per unit of material transported.

Cofco Tunhe supplies tomato concentrate to the largest multinationals in the food industry, such as Kraft Heinz, Nestlé and Pepsi Cola. The cultivation of industrial tomatoes is practiced in thousands of fields in Xinjiang in conditions of exploitation that would be unacceptable in Europe: massive use of pesticides, picking by peasants men and women for a derisory salary (1 cent of euro per kg of tomatoes picked).

Since China joined the WTO in 2001, the Chinese industry has increased its presence by benefiting from increasingly less restrictive customs regulations. Italy, with the ports of Salerno and Naples, is the host destination in Europe for Chinese concentrates. Part of the Chinese concentrate that arrives in southern Italy is processed by Neapolitan canneries for the European market, another part is reworked and re-exported outside Europe, mainly to Africa and the Middle East. What does « reworked » mean? The concentrate is simply diluted with water and a little salt, making it a product produced in Italy. The label of the goods never indicates the Chinese origin of the product, while the word « Italy » is indicated on the box. There is nothing illegal about it. European legislation allows this. It also allows many other things.

The gaps and shortcomings of European legislation do not only concern imports of non-European products. They clearly characterize the entire food industry sector. The massive use of additives, flavors and processing aids is legally organized in the European Union (320 authorized additives).

Industrial foods often have poor taste, imperfect texture and unattractive color. To compensate for these defects, the industry proposes the addition of flavors, flavor enhancers, firming agents and colorants. A second aspect of this reality is the increasing length of the production and distribution chains. The answer: the use of preservatives and antioxidants.

Finally, the race for profitability and productivity leads to an increasing use of various additives and other technological aids. Information on the use and presence of these products or the residues they leave behind requires rigorous labeling. It does take place for the additives of the list E but it is non-existent for flavors and processing aids, which opens the door to many abuses … legal. Let’s add that the list of 320 authorized additives should be limited to a few dozen (50 to 60) to avoid any risk, as the organic sector does.

In conclusion, I have no hesitation in stating that industrial food is normally tasteless, deficient and dangerous to health. It succeeds in seducing only by the contribution of chemistry and the complicity of the public authorities which offered a lax legislation to him. So what to do? Simply choose to favor seasonal, regional and organic products.