I REFUSE TO HAVE A « SMART » METER INSTALLED IN MY HOME 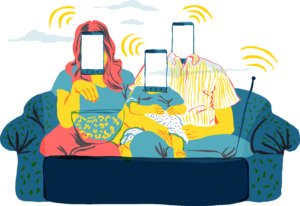 On January 11, Minister Crucke, in charge of energy, announced the filing of a draft decree that will regulate the deployment of « smart » meters in Wallonia. Presented as an essential tool for the energy transition, the « smart » meter should be welcomed by all. However, I have the firm intention to refuse it, at the risk of upsetting the Minister, his administration, the experts who advise him and the network manager (ORES, in this case).

I’ll probably be classified as a nerd, or even as a technophobe or just a pain in the ass, but I don’t care. I don’t like it when someone imposes, in the name of progress, a « solution » that I don’t like and that I have every reason to distrust. Even more so if we add that the good old « stupid » meters will cease to be manufactured, which would leave us no choice. Moreover, I have every reason to question the idyllic picture that is presented to us, describing the many advantages of this harmless and convenient tool for measuring our electricity consumption.

Thanks to the new meter, we will be able to consume less electricity. We will be able to follow our consumption on our computer or smartphone screen. This way, we will be able to organize ourselves so that our domestic appliances consume at the best time. In fact, when our fridge, washing machine and vacuum cleaner are also « intelligent », i.e. connected, the network operator will be able to control our behavior. Another advantage of the smart meter is that it will send our consumption data to the network manager via electromagnetic waves. No more having to greet the employee in charge of reading the data displayed by the stupid meter that is still ours today. No more unbearable chore of reading the data ourselves once a year in case the appointment with the employee was missed.

In short, it is the comfort that is offered to us! Offered, not really. This comfort has a cost, which neither the Minister, nor the experts, nor the network manager mention. This cost, of course, will be borne by us, the users. First, an economic cost. I would like to point out in passing that the German government has judged it too high to justify the widespread use of « smart » meters.

The replacement of our stupid meters by « intelligent » ones entails hidden additional costs:
- The life span of the new meters is estimated at 15 years compared to 40 years for the old ones;
- the risk of breakdowns and malfunctions is clearly higher for an electronic system than for an electro-mechanical system;
- the extra electricity consumption due to the operation of the meter itself and the communication system linked to it is not negligible at all.

The cost in terms of security and privacy is unbearable. Electrical installations are already parasitized by non-linear loads due to some new equipments… Data transmission will add to this pollution of the electrical supply and will generate a premature ageing of some devices and the possibility of hot spots appearing with a risk of fire (several fires have occurred in France following the installation of a smart meter).

Much more worrying is the intrusive potential of the smart meter. It is the ideal tool to intrude in the private life since it allows to follow permanently our comings and goings and even to know our intimate way of life. What will prevent the network operator from selling personal data to those who wish to use them to complete the tracing of our fellow citizens? Not to mention the obvious risk of piracy. It is known that meters are only protected by rather rudimentary codes that can easily be broken to take control of them.

And the cost to our health? Radio waves, especially when they are pulsed, are problematic for the health of people exposed to levels designated by law as harmless but classified as probably carcinogenic by the WHO and mutagenic, neurotoxic and toxic for reproduction by all the scientists specialized in bio-electromagnetism.

It will be objected that the type of meter envisaged in Wallonia uses for the transmission of the data the electric circuit (technique of currents carriers in line — CPL2) by superimposing to the current in 50Hz a signal of high frequency (in the range going from 50 to 150kHz). This technique therefore contributes to pollute the indoor network of the house by transforming all cables into transmitting antennas. No study has been done to date to confirm that this has no effect on health. Many electro-hypersensitive people subjected to this type of environment report deterioration of their health.

IS THE « SMART » METER REALLY SMART?

According to Minister Crucke, CWAPE experts and the European directives, « smart » meters will encourage energy efficiency. To date, no serious study has been able to demonstrate the truth of this claim. If the widespread installation of smart meters is accompanied by citizen awareness and training, a slight reduction in consumption (5 to 15%) can be expected, according to some analysts. But what is the real contribution of the meter to this result? Isn’t the motivation of the citizen the determining factor? Wouldn’t the result be better if we adopted a progressive, intelligent electricity tariff?

At this stage, I see only two big winners in the « smart meter » operation. First, the meter manufacturers. They benefit from a captive market on a European scale: the installation of 200 million meters in Europe over the next 15 years is worth 40 billion euros. Then the network managers. The elimination of jobs for meter reading allows them to reduce costs since the installation of new meters will be charged to the users.

In addition, grid operators will be able to remotely control functions as interesting for them as opening, closing or reducing the power of meters. Thus, the citizen-consumer of electricity will be at the mercy of the distributor. Bad weather for the insecure and the distracted. It is no coincidence that the first stage of the « smart » meter deployment is aimed at budget meter customers.

I am neither electro-hypersensitive, nor in a precarious situation, nor am I opposed to progress, if by progress we mean improving the living conditions of all while respecting the living world. But I am very concerned about the future and the health of our children and grandchildren. The communicating meter — let’s stop calling it intelligent — is a tool for controlling people, dangerous, intrusive and harmful. Its usefulness is more than questionable. I have the responsibility and the right to refuse it and to advise everyone to do the same.