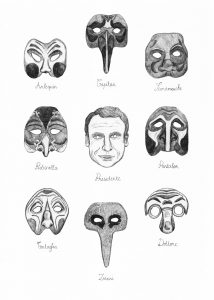 It was to be expected: after 2 years, or almost, of Emmanuel Macron’s presidency, many experts and essayists have examined an exceptional personality from all points of view. A candidate from no party, with ambitions to revolutionize the system, politics, the country, the social classes, Macron has become a phenomenon, an insect scrutinized by the entomologists of politics. How did he practice power? How did he communicate? Has he, as he proclaimed during his campaign, changed everything or almost everything? He who wanted to embody a renewal, is he not, in the etymological sense of the term, a « devil »:  » the one who throws in all directions « ?

It is the man, what he embodies and what he intends to (re)present that Roland Gori has attacked in The nakedness of power. Understanding the Macron moment (Les Liens qui Libèrent, 2018). According to this psychoanalyst, Macron’s practices, decisions and attitudes make him seem like an infamous positivist who places everything in technoscience, or a dangerous boss of start-up, using the mantra  » at the sametime » to reconcile the interests of the market with the illusion that citizens want to hear: a power that would allow them to forget the anguish of death, of a tomorrow that does not sing. Macron’s universe is built from his own journey (told in many books, interviews and articles), and at the same time from the demands of the market, the world, the economy. According to the psychoanalyst, it is at the same time the fruit of the ambition of the current president to make France a successful company and a humanistic reading that candidate Macron had shown during the campaign for the presidential elections in 2017. In retrospect, these elements of language listed and deciphered by Gori seem misleading or hollow. It is, in a way, an attempt to reconcile the two parts of the ruler’s body: the spiritual, symbolic body, which must be protected and unconditionally loved by the population, and the material, political body, which the populace must hate and destroy.

Gori, relying on a number of historical or contemporary examples, could not insert here the yellow vests and the Benalla affair… The material body of the founder of En Marche! has not ceased to be denuded and devalued. The president candidate kept on wetting his shirt, taking off his jacket, showing with the appropriate tremolos that he understood. But his vocabulary, Gori observes, still fooled the former Rothschild banker turned table service buyer into a faded image. Gori describes this in a precise but accessible, relevant but understandable vocabulary and is undoubtedly right: the King is naked. The King has few protections. It is sinking into a technological, economic and social dead end. The blows that are dealt to him only break the carapace that is meant to protect his immortal, symbolic body, so much so that other symbols have been touched. Andersen’s tale, The Emperor’s New Clothes, to which Gori alludes at the beginning of his booklet, has never been more true: we realize that Macron is not exceptional. This may be appropriate, if the entourage and symbols of the presidency provide assurance and comfort. Except that…

…THE DEVIL IS IN THE DETAILS

Michel Pinçon and Monique Pinçon-Charlot attacked Emmanuel Macron’s entourage and surroundings in The President of the ultra-rich. Chronicle of class contempt in Emmanuel Macron’s politics (La Découverte, 2019). Strangely, the cover of their new book looks like the one of their indictment against the husband and fan of Carla Bruni. Carla Bruni is a star. The Pinçon-Charlots are also characters; but while Carla undoubtedly makes the ears of many groupies quiver, they, as a duo, make the ears of many wealthy people whistle without too much effort. This book, precise, concise, very well written and with an educational vocation, does not depart from their line of conduct. This Chronicle is worth its weight in mustard in a silver spoon!

Like scientists, the Pinçon-Charlots deconstruct how the so-called champion of a new world never ceases to remind us of and embody the Old Regime through his declarations (called  » macronades « , a word as vicious as « macronades ». His decisions are socially unjust and financially costly, his habits are indecent andinsulting to « the people ». the people who are nothing  » and his entourage with the independence as much as a small in the pocket of the kangaroo. The « devil » is in all the details of a machinery maintained by the media, official and Elysian.

Like snipers, the itching hairs of the bourgeoisie and the rich in France sift through all the gold of Macronism with their prose and never miss their target. From the Élysée Palace to the villa in Le Touquet, from the (generally high) social origin of the LREM deputies to the storytelling of Emmanuel Macron aimed at making him look like a deserving kid, the book is very effective. It ends with an almost poetic vision in a well-thought-out article on the surge of yellow vests in the « beaux quartiers » and the Champs-Élysées. This epilogue shows the discrepancy of a policy paid by the majority of the population for a minority of the population. A majority to whom nothing is asked and to whom too much is imposed for a minority to whom everything is proposed and too little is imposed… It is an imbalance, but one could think that awareness can fix everything. Except that…

It is a titanic task that Paul Cassia, professor of law, has taken on in The Republic in pieces. The failure of the start-up Nation (Free and Secure, 2019). As a committed citizen, he demonstrates throughout 300 pages to what extent the character, what surrounds him, but even more so what he produces, declares, and achieves, is not a rupture or a change, but a continuity in the neoliberal vein with a touch (for taste, no doubt) of authoritarianism.

You have to admire Cassia: first, he has taken on the task of accurately reading all of Macron’s bills, all of his vote counts, all of his statements, all of his interviews, all of his speeches — or almost all of them — since the time he was on the drafting committee for the « Attali Report » in 2008! Like Gori and the Pinçon-Charlots, he was able to identify a vocabulary facility, based on many hollow words if they are not embodied in the eyes of everyone. Then, as can be felt throughout some of the tedious inventories (36 cases of ginned up flip-flops or the litany of  » I do the opposite of what I say  » on about fifteen pages), Macron’s ideology and the dogma that underlies his movement do not exist, have no anchor and especially no interest. A lot of words and a lot of acts too (since Cassia lists the overabundance of bills, ordinances, amendments, tabled during the first year of the current tenant of the Elysée). But mostly a lot of repetition. If these were repeats of improvements, they would cause less damage. But, according to the saying of which Macron seems to have forgotten the second part,  » to err is human but to continue is diabolical « Cassia wonders: how can someone who accumulates so many untruths, lies, unconstitutional acts, naive (at best), socially violent (often) statements, denials of his own declarations, and changes of (language) rifle get elected, first, and then obtain the support of personalities who had vilified him throughout his ascension? The answer is simple: we are dealing with a craftsman who is an expert in smoke. He protects the spiritual body of the King, pretends to be vulnerable but continues to believe himself legitimate to represent France, especially abroad. No matter how much Trump laughs at him, no matter how much his European partners follow him backwards, Macron is there, and it doesn’t matter what the means are, as long as the president’s egocentric objective is achieved! The mistakes made and the judgments of others can only increase the prestige of a president who takes ideas from everywhere without any thread, sowing discord wherever he goes. A real  » devil « .

If Cassia’s book were full of legalese, her point would reach almost no one. But the author has culture, memory and a sense of humor. His words hit the nail on the head and his deconstruction of « Macronism » had the desired result: mistrust, rejection, and increased vigilance. When reading the tracks that Cassia suggests, at the end of her book, to avoid that it ends badly, we say to ourselves that it is not won. It would take a radical change of a person, a system, a party, a governmental logic. Like the Pinçon-Charlot and Gori, he has doubts about the improvement of the situation and envisages the arrival of a new French Revolution.

What if Macron was the last avatar of a system at the end of its rope, in which he will make a mess to show its vacuity? What if he was Romulus Augustulus, whom Dürrenmatt magnified in Romulus the Great, an emperor who entered his career to destroy this power from within? But how many lives were shattered and people demolished before?

In this case, the French can count on four solid safeguards. Of which, curiously, the majority of the media speak rather little. Read them, urgently.