Go for zero or the illusion of control 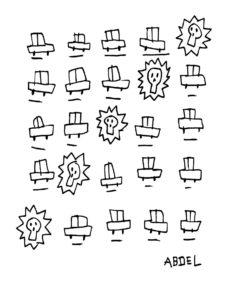 Car accidents are not accidents, i.e. fortuitous, unforeseeable events, they are logical occurrences in a system that refuses to integrate into its order the acceptance of limits. Perceived as errors in a well-organized system, they then appear in the media on a daily basis as « what should not have happened ». They thus accompany the spectator as something that is seen for what it is not: an unfortunate incident that must be avoided in the near future. With nearly a billion cars in the world, millions of them in continuous traffic, crossing roads, walking through cities filled with pedestrians, passing other cars, stopping, starting, turning, collision-free is an impossibility. The fortuitous multiplied becomes organization.

However, the various political bodies relay the illusion that, under the physical reality that a specific and localized accident was avoidable, all of them are, and that it is therefore possible to eradicate automobile mortality:  » Every road victim is one too many. Zero deaths on the roads: You can help! « (1). But in addition to the motorist, it is also the car and its technique that kills! It is obvious that some drivers are irresponsible in terms of death, but to put the logic of the accident on the individual and to exonerate oneself from the fact of putting in the hands of anyone an object that can be driven at extreme speeds and in various states, is based on an organized disresponsibility. This creates the illusion that the subject has integrated the limits in a society where, paradoxically, he is constantly invited to exceed them. As soon as such an object is left within the reach of everyone, it is quite impossible to protect oneself against the risk of an « accident », and the mass circulation of cars cannot therefore free itself from the logic of the unforeseen which is intrinsic to it. Since the car is an object of worship and comparison, it is destined to be omnipresent and adulated as an object of speed, but also as an outlet for the malaise that the object paradoxically creates.

To believe in a possible end to car-related deaths is at best a misjudgment, at worst a lie. The fact that the car is considered an indispensable object is the reason why the focus is not on the use of this mode of transport and its possible reduction, but on the behaviour of drivers: if we cannot reduce traffic, let us reduce risky behaviour. The car is there, like a tree in a forest, the wind in its branches, the rain on its leaves. It cannot be otherwise. From then on, the accident represents the ritual offering of our consumer societies, the necessary price to pay, the car being  » one of the privileged centers of daily and long-term waste (…) by the spectacular collective sacrifice of metal sheets, mechanics and human lives that the Accident represents — a gigantic happening, the most beautiful of the consumer society, by which it gives itself, in the ritual destruction of matter and life, the proof of its superabundance  » (2). Just as we can’t stop wasting in this system, we can’t stop dying in the car.

The car ensures growth and is indispensable to it, it is therefore a consequence of growth as well as its cause, death by « accident » is therefore one of the prices to be paid on the altar of the capitalist economy. The car modulates space by deploying itself in a totalitarian way, transcending nature if the latter prevents the complete realization of its technical performance and the freedom that we attribute to it: we cut down the plane trees bordering the roads to prevent the car from crashing into them; we refuse to limit the car to 20 km per hour in the cities when we know perfectly well that this measure would be accompanied by a significant reduction in road deaths. This is because the speed allowed by the car cannot be impeded at the risk of rendering its function useless, that of an object that serves : to « recuperate » the time one loses while working, in particular to pay for one’s car; to « recuperate » the time lost because of the generalization of the individual car, which continually reduces its use value and generalizes traffic jams at all hours of the day, making the description of traffic jams and ways to get around them the subject of daily radio broadcasts; but also to « take back » time lost because of the extension made possible by speed and the automobile, which distances the place of work from the place of life, the place of production from the place of consumption, the place of life from the place of leisure, the nuclear family from the extended family, the friends from each other… The automobile then conjures up, in a race whose battle is lost in advance, what it has itself produced, it becomes the remedy for the evil it creates. And this illusion assures him until today… its perpetuity.