FOR A EUROPEAN SPRING 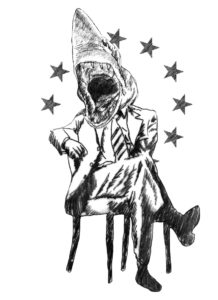 The astonishing severity of this winter, apparently due to the historically low level of ice in the Arctic Ocean, which would have disrupted currents and winds, is a reminder of the existence of ongoing climate disturbances. The European CO2 emissions market, the EU’s flagship measure to fight climate change, has never worked: no emissions reductions can be attributed to it after almost 7 years of existence. On the other hand, it has saved industry time and money, which is why nearly 100 NGOs have recently called for its dismantling and replacement with more effective policies(1).

Ecological emergency, political emergency: the spring that is about to come suggests multiple shocks. The latest developments in the eurozone crisis all point to a rapid strengthening of the EU’s powers of control over national policies. The agreements imposed on Greece, Portugal, Ireland and, in a spectacular fashion in recent weeks, on Cyprus, have each time seen one of the members of this monetary zone having to abdicate (at least temporarily) its sovereignty to preserve the whole. The eurozone is in many respects a de facto federation today, but — and this is becoming more visible every day — a seriously flawed federation and certainly not a democracy. Not or not yet? In any case, the few social democratic governments in the zone are formally protesting against austerity, but, paralyzed by the threat of capital flight and politically weak, they are doing little; Germany finds itself in a dominant position that brings back bad memories; and the relative political paralysis of the whole places those unaccountable technocratic institutions, the IMF, the European Central Bank and the European Commission, in a position of strength.

The adoption by the European Parliament (by a very large majority) on March 12 of the « 2‑Pack », two new regulations designed to strengthen the instruments of coordination of national economic policies, should allow the European Commission to strengthen both its power during the negotiation of financial « aid » programs for indebted States and its right to oversee the preparation of national budgets, in particular by imposing fines in the event of non-compliance with the objectives set, but also, and this is new, by giving it additional means to impose on this State the way in which it must achieve the objectives it imposes(2). The Council of the EU, i.e. the States, want to give their final approval to the project on May 12 in Brussels. The latter would, for example, give the injunctions of the Commission to Belgium to implement « structural measures », such as ending wage indexation, an entirely different echo from a few years ago, when such threats were serious but not yet severe.

The Commission criticizes the country for not having fully implemented its recommendations from last year. But the political nature of these criticisms is striking when compared to the treatment of the Netherlands: the latter is in a slightly worse economic situation than Belgium since it adopted the Commission’s recommendations, but precisely for this reason it finds favour with the Commission. This raises the question of the latter’s real priorities: reducing deficits or destroying the welfare state in the name of a neo-liberal worldview. On the other hand, they are very good for the lobbyists of big companies.

The latter, unlike the voters, have a great deal of influence on the Commission. The expert groups that advise it remain, in many key areas, dominated by big business experts. The back-and-forth between the Commission and private lobbies is constant, to the point that the European Ombudsman, following a complaint from Corporate Europe Observatory, considered the problem to be sufficiently « systemic » to justify the launch of an autonomous investigation by his services.

Internal documents of a major lobby for the promotion of free trade in services (financial services, tourism etc.), the European Services Forum(3)received and published by CEO(4)The latter’s privileged access to the Directorate General for Trade, the section of the Commission that has a monopoly on negotiating such trade on behalf of the entire EU, shows that they share confidential documents on the progress of the negotiations. The negotiations for a free trade agreement between the EU and the US, in this context, augur the worst: the confidential « mandate » given by the States to the Commission, published recently by an American newspaper(5)For example, the report calls for maximum « protection » for investors, which would give them the right to sue states whenever new legislation would harm their economic interests.

Since the evaluation of GMOs is one of the issues on the table, among other things the « harmonization » of agricultural standards with the USA, this makes the campaign against any further approval of GM crops very important: it might not be financially possible to turn back the clock if any of them are approved. More than twenty are currently awaiting authorization from the Commission, most of them tolerant to Roundup, the total herbicide manufactured by Monsanto, whose benefits are no longer in evidence.

What to do in the face of this avalanche of good news To regain the political leeway that is so sorely lacking Some elements for an answer: on April 4, a collaborative investigation into tax havens by a consortium of American investigative journalists uncovered tens of thousands of shell companies that allow wealthy individuals and multinational corporations to evade taxes. A first step towards the restoration of public power

On March 13 and 14, days of action against austerity and for democracy took place in Europe and in Brussels. In addition to various demonstrations, a building of the General Economic and Financial Directorate (ECFIN) near the Park of the Cinquantenaire was peacefully occupied by a hundred activists, who organized a popular assembly where various representatives of countries affected by the austerity madness (Greece, Portugal, Spain, etc.) were able to testify to the consequences of the policies that were imposed on them within the very administration that had designed them. Their motto is « For a European Spring ».