EFFECTING THE « DESIRE FOR RESISTANCE 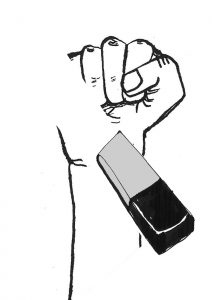 The arm wrestling between the EU institutions and Greece has a scope that goes beyond the programmed impoverishment of that country. It concerns the very future of the European Union, as well as the standard of living and freedoms of its people.

In his famous lectures, the historian Henry Guillemin reminded us of a sentence, dating from 1897, by Maurice Barrès, the master of thought of the French nationalist right:  » the first condition of social peace is that the poor have a sense of powerlessness.« This paradigm sheds light on the outcome of the negotiations led by Alexis Tsipras. The citizens were called by their prime minister to vote in a referendum against the EU proposals, which were rejected by 61% of voters. As a result, Tsipras accepts an agreement that is even more unfavorable for the Greek people. Moreover, while submitting to the diktat of the EU, he declares: « II do not believe in this agreement. It is a bad agreement for Greece and for Europe, but I had to sign it to avoid a catastrophe(1) ».

Kammenos, chairman of the Independent Greeks, the nationalist party in the governing coalition, and Minister of Defence, also said that the acceptance of the July 13 agreement was a « capitulation » that was the result of « blackmail » and a real « coup d’état ». He added: « Greece capitulates, but does not surrender(2)  » and asked the majority members to vote in favor of the agreement.

Tsipras and Kammenos develop here a procedure of doublethink that consists in annulling a statement at the same time as it is pronounced, while maintaining what has been previously given to be heard. Thus, members of parliament and citizens to whom these speeches are addressed must have the capacity to accept opposing elements: the self-proclaimed resistance and the total capitulation of the government, without noting the existing contradiction. The individuals then have two incompatible and unrelated visions.

To say one thing and its opposite at the same time produces a disintegration of consciousness. The denial of the opposition between the two proposals prevents any representation. It is no longer possible to perceive and analyze reality. In the incapacity to think and to put emotion at a distance, one can only feel the reality, the programmed destruction of the country and be subjected to it, not defend oneself from it.

The denial of the opposition between resistance and capitulation suppresses any possibility of conflict, because it makes coexist within the self two opposed affirmations which are juxtaposed without influencing each other. This procedure is called cleavage by psychoanalysis. It forbids any judgment and leads to an indifference of the elements of reality. The deconstruction of the ability to symbolize prevents the formation of a memory and thus opposes the constitution of a us. Transforming us into monads, the discourse has a petrifying effect in the face of the omnipotence of the European institutions and locks us into a psychosis: no other policy is possible.

George Orwell has already described in 1984, the device of « doublethink » which consists in « holding simultaneously two opinions which cancel each other out, while we know them to be contradictory and believe in both.(3)« He had already identified these « principles of enslavement » which deprive the individual of all capacity of resistance, which have for function to erase in the subject « any memory of the existence of a possible desire of resistance ».(4). The policy that tends to erase the « very desire for resistance » can be illustrated by the seizure of the greek parliament by the Supreme Court’s attorney general, asking it to examine two complaints filed against former finance minister Yanis Varoufakis. It is criminalized the elaboration of a plan, not implemented, to create a parallel currency to the euro. As Courrier International writes: « his secret reflections could have far-reaching consequences for the former Greek finance boss »(5). Thinking about resisting could become a crime.

The doublethink process is not limited to the government’s economic and financial policy, but also includes its foreign policy. Rabbi Mordechai Frizis, former chief rabbi of Thessaloniki, was concerned about Syriza’s election victory. He added that the Syriza party « is an anti-Zionist party that is against Israel »(6). The supposed anti-Zionism of the Greek government has recently resulted in the signing of a privileged military agreement with Israel. This agreement is similar to the one between Israel and the United States. It has no other equivalent. It guarantees legal immunities to all military personnel during training in the other territory (7) w it stipulates that the Israeli navy will now be able to intervene in Cypriot waters and the eastern Mediterranean, to neutralize any Islamist attacks against Greek interests and those of the Jewish state. Elite IDF units could also, « if necessary, be deployed on the gas platforms of Cyprus, or settle on Greek military bases »(8).

The military agreement was signed on behalf of the Greek government by Panagiotis Kammenos, Minister of Defence, a member of the Independent Greeks [ANEL], the nationalist party that is part of the government majority. This agreement can only exist with the consent of Syriza. This was confirmed on July 6, 2015, by the trip to Jerusalem of Nikos Kotzias, the Syriza-appointed foreign minister for talks with Israeli Prime Minister Benyamin Netanyahu, to « strengthen bilateral ties between the two(9) countries. »

Thus, the discourse of Syrisa, presenting itself as the result of a popular will to break with « imperialism », is accompanied by a policy of reinforced integration into the imperial structure. The governmental action must forget the program of the party and this one abstracts itself from any concrete act. Like the Husserlian epoche, the Greek government puts the material world in brackets and suspends it, in order to make room for intentionality.(10) The gaze should no longer be directed outwards, towards objects, but should be turned exclusively inwards. The only thing that matters is Spiras’ intention. Its anti-imperialism exists by virtue of its enunciation and can develop in parallel with a strengthening of integration within NATO, with a policy that is its opposite. We are outside language, discourse and reality coexist in an independent way, the first one as a simple litany, that is to say as pure enjoyment, the other one being reduced to the unnameable, to the real that we cannot think and therefore that we cannot confront. The said becomes the real, they merge. Thus, the gap with the said power is no longer possible.

Primacy of the image and austerity As only Possible

The capitulation does not call into question the image of the Prime Minister: « I cannot be blamed for not having fought. I have fought as far as no one else has fought » (11). Thus, it leaves a policy of confrontation to occupy a place of victim. The iconography produced by victim ideology has two faces, both the image of the hero, the one who fought more than any other, and that of the victim. Thus, the mother of Alexis, Aristi Tsipras, 73 years old, tells the weekly people’s magazine Parapolitika: « Lately Alexis does not eat, does not sleep, but he has no choice, he has a debt to the people who trusted him » (12). His wife adds: « I rarely see him anymore. He goes from the airport to the Parliament. He doesn’t have time to see his own children, how can he see me? Everything is reduced to the suffering of the « beautiful soul », that of a faithful but wounded politician.

The stakes of the confrontation are shifted from the objective opposition between social forces to the inner conflict of the Prime Minister, to his state of mind. The populations are thus dispossessed of the materiality of their resistance for the benefit of the safeguarding of the image of Tsipras. The question of image has always been central for the Greek government, the change of name of its interlocutors, the mutation of the « Troika » into « institutions » has been presented to the Greek people as a victory.

However, the Greek government has totally bowed to the demands of the creditors and accepted all their bids. The demands of the « Troika » are not over. The new economic deterioration of the country allows the « institutions » to demand more privatization. The urgency of the situation will mean that they can only be done at knock-down prices. From capitulation, the government can only move to collaboration in the dismemberment of the country.

The « austerity policy » imposed on the country has already, in five years, reduced the country’s GDP by 25% to 30% and further reduced the standard of living of the vast majority of the population, with high incomes having been little affected by the measures taken. The imposed plan can only accentuate this trend: increased austerity and relative increase of the debt. Greece will not be able to meet its commitments, which will require a new external intervention. Greece’s exit from the Eurozone may simply be postponed. Moreover, Greece is losing most of its remaining national sovereignty, as it must comply with automatic spending cuts and submit its reforms to the goodwill of European institutions. Where does the « catastrophe » lie, in a further rapid and programmed weakening of the country or in an exit from the Euro allowing a default on the debt and thus a possibility of revival of economic activity?

PROMOTING A Sense OF EmPOWERMENT

The attack on the people’s desire to resist is not only on Greece, but also on the whole of the EU. Tsipras wanted to believe that what he considered taboo: a « Grexit » presenting a danger of dismantling the euro zone, was also taboo for his interlocutors. However, for the leaders of the EU and especially for Germany, the European construction is destined to disappear in the future great transatlantic market. Germany’s attitude, both in the fight against tax evasion and in its repeated procrastination in the face of attacks on the euro, has favored the operations of American hedge funds. This desire to put the Eurozone in trouble is confirmed by the repeated refusal to accept the inevitable, the restructuring of Greek debt(13). This denial has the effect of creating permanent instability in most of the member countries of the Euro and placing them under the threat of the financial markets. This attitude is consistent with the privileged commitment of this European state to the establishment of an economic union with the United States.

The plan put in place by the Minister of the Economy, Wolfgang Schäuble, was not primarily aimed at Greece, but rather at countries with large budget deficits, such as Italy and France, in order to transfer what remains of their budgetary prerogatives to the European institutions, i.e., to Germany(14). If the extinction of the euro zone in a transatlantic whole is part of the « cards » of the European institutions, this dismantling must be carried out in order, that of « austerity », that of Germany, the dominant European power, around which the United States set up the EU and with whose help they are in the process of deconstructing it.

Indeed, the dissolution of the European Union, in this political and economic area, can only be done at the price of a significant decline in the standard of living and freedoms in Europe. The people of the EU will have to consent to the dismantling of their gains. The Greek experience, leading to the creation of a feeling of powerlessness in the face of these devastating policies, then reveals the totality of its stakes.