Ears to the bone 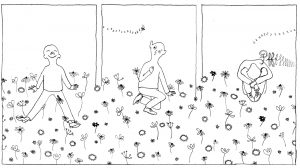 4h37. Suddenly, a shrill ringing sounded at regular intervals. I am startled. The dreams in which I was immersed evaporate in a few seconds. Two hours ago, I had been awakened from my slumber by a bunch of party people coming out of a nightclub. I jump out of bed and angrily open the window. For once, it’s not a faulty burglar alarm: I see a truck parked on the sidewalk with a worker with a bloodstained apron unloading bovine carcasses to deliver them to the local butcher. Too happy to be able to question the person responsible for this din, I yell at him that it takes hours to do this kind of work. Unperturbed, he invites me to address my complaints to his boss about the working hours, and to the car manufacturer so that he will allow the opening of the tailgate of his vehicles without making all this noise. Dismayed, I look for a relevant repartee when the neighbor across the street opens his window and starts to yell… at me. It is my untimely noise that arouses his fury. I try to apologize but in vain, my neighbor preferring to slam his window rather than listen to my explanations. While the meat delivery man laughs at the situation and goes back to his work, I lie down and, convinced of the soothing virtues of tobacco, I light a cigarette.

The almost daily repetition of this kind of incidents gives me angry feelings that I don’t know yet against whom to turn. My landlord? He just redid the insulation of the apartment, giving me a little more peace and quiet. My neighbor? In his defense, I must admit that I had already woken him up a few days earlier while I was listening to music without caring about the late hour or the windows left open because of the heat… The European Union? An opponent that is a bit too big and seems more sensitive to the sirens of the automobile lobbies than to the 210 million Europeans who are victims of overexposure to vehicle noise. The new EU regulation limiting the noise level will only really apply in 8 years… and will allow, by derogation, sports or luxury cars to increase their sound volume from 2 to 6 decibels! It is while meditating on this that I put earplugs in my ears and finally fall asleep.

5h52. First ambulance of the night, third alarm clock, second cigarette. Police cars follow with their sirens blaring. In the background, the murmur of the first streetcars and buses announces the imminent and massive arrival of cars. There is less than an hour left before the jackhammers start to roar on the construction site next door… Faced with such a disproportionate balance of power, my capitulation is inescapable: it’s useless to try to sleep again. I comfort myself by comparing my ordeal to that of the residents of Zaventem who endure tens of thousands of aircraft take-offs and landings every year.

7h00. With my nerves on edge, my eyes foggy and my neurons in disarray, I go out to buy a pack of tobacco. I think to myself that all this must not be very good for the health. My cigarette consumption increases in proportion to my level of tension and lack of sleep. To console myself, I can’t think of anything better than the saying that the world belongs to those who get up early.

7h30. After having slalomed on my bike in the middle of the exhaust fumes and the horns of drivers irritated by a long traffic jam, I am blocked by a police roadblock. Today, Brussels is hosting the Europe-Africa summit, whose 90 delegations have led to the deployment of thousands of police officers, paralysing several districts. I abandon my crossing of the city center and, at the same time, my shopping list.

8h45. Judging wise not to go back home while the jackhammers are shaking the ground, I found a quiet terrace where, after enjoying a first coffee, I wait and enjoy the pleasure of closing my eyes and letting myself be gently toasted by the sun. Quietness immediately disturbed by the arrival of a helicopter circling in the air. Do you know what it feels like to have a police machine hovering over your head? In addition to the noise of the propellers and the engine that would make the traffic seem like a gentle purr, there is the atmosphere of war and the unpleasant feeling of being watched, suspected, even guilty. I can’t get used to it, even if the helicopter has become a familiar sight in the Brussels sky.

In the last 10 days, I have already met them at least 5 times: there was the visit of the UN Secretary General, the visit of the American and Chinese presidents, and then a NATO summit and another one of the EU. In 2001, Brussels inherited the organization of all the European summits, whose annual number has increased fivefold in a decade… To be an international capital, you have to earn it!

10h00. Back home, I am pleased to see that the jackhammers are no longer at work. I sometimes wonder if site managers plan the loudest jobs at dawn on purpose. No regulation forbids it and the contractor concerned made me understand (on a Saturday morning when I was complaining that his machines were running on weekends) that I could be happy that the structural work is coming to an end and that there is only a year and a half left before the completion of the finishing work… if everything goes well. But so be it. Taking advantage of the sound respite, I can finally find the necessary concentration to start my working day.

10h05. A cymbalum player settles under my window. I really like the cymbalum, it’s a very melodious instrument. The first time I heard a musician play it on my street was when I moved into this apartment and I was delighted to hear acoustic music in the public space. Since then, two years have passed and the weekly repetition of the same few pieces, played in a loop for the tourists, has turned into a torment. Alas, ears have no eyelids… Like the detainees in secret CIA prisons forced to listen for days on end to rap, metal, pop, even children’s songs, babies crying or cats meowing, or like the inhabitants of Fallujah in 2004, bombarded with hard rock at full volume by the GI’s; I am deprived of silence and sonic intimacy.

What to do? Defend yourself with a powerful amp and speakers, and add to the general cacophony? Isolate yourself under headphones to at least choose your own music? Continue to suffer from this incredible accumulation of all kinds of sound information, sirens, bells, motors, speakers, alarms, which make us stressed and sick? Move to more peripheral, quieter, more boring and more expensive areas? Leave the city? Create « quiet zones » as recommended by some French cities? Create « quiet zones » in the countryside for the rest of the city dwellers, and launch a silence tourism as it is experimented in the Netherlands? Take sleeping pills? Become deaf?

10h30. Turning this equation upside down, a painful headache was added to the fatigue, tension and bad mood. I am sure of only one thing: the world does not necessarily belong to those who get up early.