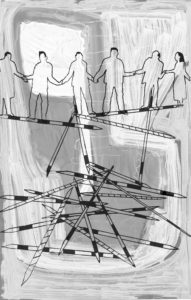 existence is complex, not everything can be explained like that, we know that well. So, if everything Jean-Pierre Collignon says here in his column is not shared by some, is shared by others, we want it to be said, because, also, it gives hope to believe that behind this instrumentalization of the crowd, there is, perhaps, something to be gained. Everything will undoubtedly depend on the possibilities of expression and disclosure of dissident thought. The early signs do not seem to point in the direction of change. The fact remains that emotion, even if it most often blocks reason, must be able to be said, even if its exercise must only be temporary, according to us(1).

Doubt. To doubt is to question, to dig, to grope. Let’s have a look, then, at this first question : is Hollande normal, a phony, a hypocrite, or is he sincerely touched and upset by what happened to the band of joyful and irreverent kids who, on occasion and without hesitation, tricked him with their drawings and comments ? There is this image, very strong of this demonstration of January 11 when the President goes to the meeting of the survivors and takes in his arms the brave and moving doctor Pelloux, companion in arms upset of the massacred draftsmen. Can one doubt the sincerity of François Hollande’s impulse ? I don’t think so. And this impulse, this spontaneous gesture is to his credit. However, angelism and strong feelings do not generally mix well with the imperatives of political reason. And, here too, one must wonder about the motives that prompted the Head of State to invite to this historic gathering some of the less glamorous figures of the world’s geopolitical elite, let’s not go into detail, we know them. And we shit on their heads. And, similarly, on the heads of those who, here and there, one must fear, are already in battle order to imagine the future constraints that will have to be put in place to  » fight against terrorism  » and, in passing, on those who would take it too easy on freedom of expression in other areas than the drawings on the front pages of the future new Charlie. They, the survivors, will be left alone, for sure, for a while. The others, the dreamers, the unhappy, the sharing, the insubordinate, the lazy and the anarchists will perhaps have interest in not bringing it back too much. Perhaps.

My cock. She had nothing to do with it ; she never farted higher than her ass. It is my head, it is my heart that took a blow on the morning of January 7th. These guys, the murdered cartoonists — but I am thinking of others, of course — were, for those of my generation, brave, mischievous, gentle and peaceful septuagenarians with whom I grew up and who, for a good part, made me what I am. And it was with immense sadness, at first, and then with happy astonishment that I saw, everywhere, these spontaneous gatherings form and gather, on the evening of that fateful day, people of all kinds, old people like me, young people who had not known Hara Kiri and who only knew about Charlie Hebdo from the first page in the bookstore window. And those, and millions of others, in Paris, Bordeaux, Lyon, Marseille but also in Brussels and in dozens of cities around the world, gathered and communed in this extraordinary day of Sunday, January 11, 2015. Not a word higher than the other, not a call for revenge, not a shout. But a quiet joy, a collective emotion as it happens only once every hundred years. This day is historic, it will be remembered, it will make history. For what was expressed there was something quite different from the endless slogans of ordinary rallies and the so-called national unity. Attention to the other, love and brotherhood, the great pleasure of being together, without distinction of any kind and a great hope that the world, finally, will change. May this immense clamor be heard by those who have the ambition to govern for the common good, that is what we must hope. As Zebu, on Paul Jorion’s blog, so rightly wrote on the evening of this unprecedented celebration :  » We’ll have to do something with this daydream, if we don’t want to return to our nightmares « .