DEMOCRATIC EUROPE OR THE GREAT TRANSATLANTIC MARKET? AT THE CROSSROADS 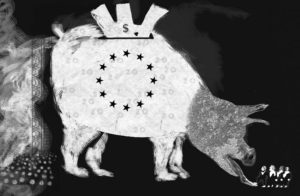 The negotiations of the Transatlantic Trade and Investment Partnership (TTIP) seem to have partially emerged from anonymity, with the European elections.

From now on, more and more people in Belgium and elsewhere know at least their existence. Their content, however, remains a much less shared piece of information: « a certain degree of confidentiality is necessary », the Commission continues to assert. However, this confidentiality is variable: some passages of documents obtained by CEO were censored on the grounds that they contained details of the European Union’s (EU) negotiating positions. Problem: these documents were addressed to commercial lobbies, which shows that the Commission hides from the public elements that it communicates to companies. The argument used by some to defend this state of affairs is that trade is more about business than NGOs. What about the victims of the trade?

Meanwhile, at the end of the 5th round of negotiations, it seems that they have entered the heart of the matter: the negotiation. You drop your tougher legislation on financial services and I align my health standards with yours, unless you’d rather I adopt your softer standards on chemicals and in exchange you blow up your local preferences on local procurement? Or do we agree to recognize each other’s standards in our own homes? That kind. The objective remains, as always, to « open » the « markets », because « it is good for growth and employment ». Amen.

There is a subject that is a little more sensitive than the others: that of international arbitration tribunals, which have already been mentioned in these columns and which would give investors who feel they have been harmed by new public regulations in a third country the right to attack that country before this kind of private tribunal. That is to say: three international business lawyers, one chosen by the plaintiff, one by the state being attacked, the third by both together. And the decisions that these three lawyers make will be binding without possibility of appeal, overriding the legal order of an entire country. The number of cases has taken off in recent years, more than 50 per year in 2012 and 2013.

Faced with the concerns that have been building up since these mechanisms became better known to the general public — and to investors… — the Commission organized a large public consultation, explaining that it was putting this aspect of the negotiations on hold pending its outcome. But here’s the thing: although the consultation is still underway, this very point was discussed during the mid-May negotiations in Washington. When questioned, the Commission did not embarrass itself and replied blithely that there was a misunderstanding: there had never been any question of a pause, at most a slowdown… In short, as is often the case, the Commission’s Directorate General for Trade is taking the critics for a ride, accompanied by a swarm of lobbyists representing the biggest companies on both sides of the Atlantic.

As good parasites of power, business lobbyists follow the power wherever it is, in the Commission or elsewhere. An opportunity to talk about their work for the Member States of the Union. The very special meeting between Hollande, Merkel, Barroso and the members of the ERT (European Round Table of Industrialists, an association gathering the CEOs of the 50 largest European industrial companies) last February, as every year now, is a reminder that the main decisions in the EU are always taken by the heads of state and government (and particularly those of the largest countries).(1) The message of the ERT was simple: industrial competitiveness must be the primary concern of the States, and all other considerations must be subordinated to it. For example, we should not set targets for limiting CO2 emissions that would prevent industry from reaching 20% of European GDP in 2020. It is likely, however, that ERT did not mention at this discussion these new scientific reports that say that a point of no return seems to have been reached in West Antarctica, that glaciers, some as long as France, have begun to slide into the water and will raise sea levels by several meters within 200 years, perhaps sooner.(2)

States are not just targets. They become, when necessary, zealous lobbyists for their respective « national champions ». This is particularly the case at the moment with banks, with the great manoeuvres surrounding the Banking Union, a major development in the supervision of banks in Europe, since the supervision of the largest banks will be « federalized », centralized at the European Central Bank. But also with the Commission’s proposals to « separate » banking activities, i.e. to separate retail banking activities (loans to individuals and companies) and investment activities (speculation on the financial markets) in order to stop making taxpayers pay the bill for speculators (the famous « moral hazard », which allows speculators to take all the risks with the assurance of being saved since a failure of their bank would endanger the entire economy). We have thus seen French, English and German diplomats… laying siege to the offices of MEPs to defend the interests of their respective national banks; or a French Socialist Minister of the Economy (Moscovici) strongly criticizing the Commission’s proposals in this area, although prepared by the French UMP Michel Barnier, on the grounds that they would put the French economy at risk! Moscovici has since lost his ministry and hopes to be appointed Commissioner by France in the next European Commission, after the European elections.

Elections should be held more often, if only for the effect they have on MEPs, who have been particularly sensitive to public opinion movements in recent months. A reminder to the outside world that does a lot of good to some people after years spent in a semi-collapsed state, dealing (for those who really work) with very technical files, leading important but not very visible political struggles, permanently surrounded by professionals of manipulation… This link with the outside world, the fact that elected officials really defend the interests of their constituents, must be defended: some MEPs hold jobs parallel to their mandate, at the risk of conflict of interest (this is particularly the case for business lawyers who advise companies), or do not wait long before becoming a lobbyist once their mandate is over. This raises the question of the real date of their hiring…(3) A real regulation of conflicts of interest is still lacking at the European level, but in the meantime, voting remains one of the few ways to influence the only EU institution that really defends, sometimes, the majority concerns of all European citizens. While there can be no question of limiting democracy to the casting of a ballot, it must be noted that abstention plays into the hands of lobbyists.