Cause to my chaos, my head is sick. 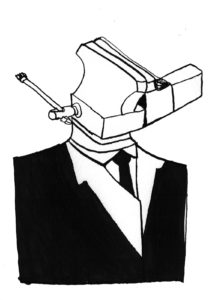 You will not have failed, in the course of time and events, to appreciate this word, which is always on the front page of our dear subsidized newspapers and in search of readers: the irreplaceable, threatening, terrible and fascinating chaos whose only evocation provokes, in the common quidam, anguish that is truly irrepressible. Just think: a few hundred cars blocked by snow on this or that highway, it’s chaos. Lines of parents freezing to death, lining up in front of a school to ensure their little ones a seat in the back of the class, it’s chaos. Strike of trains, buses, public services and other attacks on « the right to work » and, consequently, big cities invaded by cohorts of cars, cyclists, pedestrians, indifferent strollers, even laughing, it is chaos. But no need for an indigestible enumeration, there is no lack of lamentable and laughable examples, we are far from a shortage. Obviously, the intensive and exponential use of the expression has the effect that it loses more and more of its frightening character and that its impact on the already impoverished consciences is proportionally trivialized. We will have to wait for a chaos worthy of the name so that, perhaps, these same consciences regain a little vigor. In this respect, the nasty little book by Pablo Servigne and Raphaël Stevens « How everything can collapse » should, normally, alert the public, but also and above all, the political leaders and other decision-makers-managers of the public thing here and elsewhere. The public, let’s not talk about it; the poor cannot know that this book is on sale in all the good bookshops for the simple reason that, as usual, the media have only talked about it a little and that, moreover, we know unfortunately only too well, the public in general does not frequent the bookshops, being generally satisfied to be informed about what is the worries of the world, to trust the small window which is enthroned in the living rooms. That said, let’s be sure, without any form of condescension or judgment; this is a simple and cold observation. And then, isn’t it true that the general climate, in our area, always reflects very adequately the mercantile project that continues to take the place of social life; with the beautiful days, the terraces of bistros and public animations — commercial, for the most part — have taken the place, for a long time, of the popular festivals of yesteryear. The consumer, hypnotized by the mountains of poor merchandise at his disposal and whose main occupation is to lick the store windows, Sundays and holidays included, has taken over from what was once a citizen. As for the elites who are supposed to take care of the common good and even, beyond that, to care about the simple survival of our species on this pretty blue ball in perdition, spinning in a space that is truly unfathomable, there is nothing surprising in the fact that they prefer, if need be, to ignore the signals announcing what is likely to unleash, in the more or less short term, a few chaos worthy of the name, in front of which the old disaster movies would make a very poor showing.

Now, it is also possible that, somehow, the awareness of the collapse that will surely occur if nothing is done to grasp its magnitude is actually and vaguely present in the minds of some of those who lead the world. And that, simply, by short-term calculations, calculations always in connection with the places to be taken or to be kept in the hierarchy of the powers and the advantages of all kinds which are related to it, one prefers to put the head in the sand and to continue to manage the things as if nothing were. And, besides, beyond the strictly political sphere, we know what maneuvers are carried out, openly or in secret, by the real owners of the world who share, as we know more and more, most of its wealth. For these wealthy entrepreneurs, bankers, agioteurs and traffickers of all kinds, it does not matter that this planet is doomed and millions of its inhabitants with it. The madness of money, the fever of possession and accumulation is here something else than the derisory walks of the merchandise carriers that we meet in our streets under the spring sun. For, in the end, the moderately poor, the relatively well-to-do, have at their disposal — in exchange for stumbling coins or credit cards — not, perhaps, what they could really wish for, but only the substitute and the illusions of absolute wealth, which consists in the power to truly give meaning to life in the greatest freedom, that which is permitted by the exercise of communication; which, for « the rich » has no frontiers and of which, blessed as they are, they make shameless use. Yes, the « poor » have purchasing power and the « rich » can buy absolutely everything, including the complacency when it is not the perfect complicity of the political staff in place that transmits and makes vote the provisions required by those who are the only ones to finally decide everything and for their only profit. The « poor » have alienated and submissive communication at their disposal, only the « rich » have the universal use of true and practical communication. And this is why the democratic system is only wearing clothes that have lost many of their colors. And this is also why — unless there is a sudden general awakening — we should not expect any major resolutions at the climate summit scheduled for this winter in Paris.

We will therefore spend our summer vacations on the terraces of our local cafés and in our gardens, for the majority of us; in Paris, Lisbon, Barcelona or Venice for the lucky few who will have the opportunity to travel a little; in distant and exotic countries for the executives and the well-to-do retirees, good for them. And, as if stunned and rendered inert by the effects of the heat, we will lazily look at the news each morning, scan the websites that are worthwhile and see if « something » is happening, without expecting too much but taking the best measure. There is no need to sink into a too pronounced pessimism nor into a blissful optimism, but rather to be vigilant and to analyze what will happen; or not. The reason is that nothing very significant or spectacular may happen between now and the start of the new school year, in which case we would remain in this grey climate, warmed up somewhat recently by the results of the Spanish elections in May and the tremendous tenacity of the Greek government in the face of intimidation and threats from its creditors and the European Commission, to name but two. That the south of the continent sees the birth of such auguries, we can only rejoice while regretting the coldness and the clear retreat of the struggles started last winter in our country, but it is perhaps only a postponement; we will see…