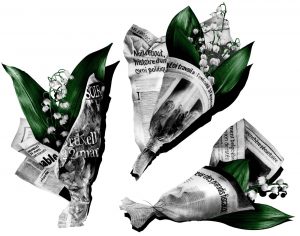 At the time of writing this column, things have happened and are happening. The attacks of March 22, to begin with, whose impact on public opinion will have been commensurate with the crime. It remains to persevere on the way which opposes any form of stigmatizations and amalgams; the sinister demonstration of the small heads footeuses and fascists in front of the crowd gathered in front of the Stock Exchange, the Sunday which followed the fatal Tuesday, is the perfect illustration of what to which we must with all force resist. On this subject, one could appreciate the manner, more than doubtful, with which the police forces — under the orders of the ineffable commissioner Vandersmissen — carried out the operations that day. And how, also, a few days later and in the same place, the same policemen and their chief in the front row, undertook to « clean » the place of the dangerous leftists who had gathered on the steps of the stock exchange. The numerous images taken by television stations and individuals, widely distributed on social networks, speak for themselves. And we will observe, to finish, that these two events will have, once again, highlighted the incompetence and the crass hypocrisy of our dear elected officials. But you get used to this, as to the rest. Just as the presence of the brave rednecks and our armed policemen in our streets and squares has become familiar to us, so has the effect that this presence has had on the activities of the human bombs, no need to dwell on it.

Now and in addition, it is with jubilation and enthusiasm that many of us, readers included, will have followed the surprising and welcome surge of fever that has swept through the hexagon in recent times. Against the project of a villainous law, high school students, students, workers, unemployed, poorly housed and other precarious people of all kinds took to the streets of France’s major cities, surrounded by countless gendarmerie, police and CRS forces who, here and there, showed a perfectly gratuitous and disproportionate violence against young protesters for whom these demonstrations were a sort of baptism of fire; they will remember it. But what is exciting and remarkable is the aftermath of these days of protest where we have seen the flowering of open assemblies of citizens of all origins and convictions in the Place de la République, in Paris and in several other cities in France and elsewhere, bringing back to the forefront the famous universal chatter by which only ideas, from the craziest to the most reasonable, are debated, without any form of constraint or order. Where we see, at last! the resurgence of free speech, until now kept under the bushel by the official discourse of political elites always more dramatically distant from the realities that the citizens live. There is, behind what some qualify as childish or infantile, the clear manifestation of what « the people » do not want any more and that they support for too long: this contempt displayed towards them by the policies led everywhere; and by those who incarnate them. In a word, what is being said here is simply: THAT IS ENOUGH!

The weeks to come, after all this has been written, will tell what will have happened to this movement. Or it will be structured and federated, will have been amplified, leading, perhaps, to surprising and multiple initiatives, giving birth to a vast and irrepressible awakening and, who knows, to the blossoming of one of those springs to which history bears witness. Or, sadly, we will have to put, once again, our dreams on hold and it will have been only a flash in the pan that, either the political-police repression, or the discouragement and the bitterness, will have quickly extinguished. There is no doubt that the author of these lines, stunned and happy witness of the beautiful month of May 1968, expects and hopes the most from this alternative.

As for the rest, we will remember the announcements of Bismuth-Sarkozy and the promises of the current tenant of the Élysée Palace concerning tax havens which, after having been severely threatened and hit by both, have recently reappeared with a bang to the feigned amazement of the political class and the press. We knew it and we know it more and more — the world of finance goes its way without encountering any obstacle. And the follow-up to this affair is likely to disappoint or even, better, scandalize a growing part of the population, to whom it appears more and more clearly that, very strictly, about everything and for a long time, « we are taking the piss ».