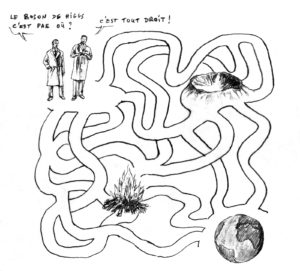 The scientific community and physicists in particular are very happy. Thanks to this enormous circular machine buried in the Swiss underground and equipped with state-of-the-art technology, we have finally been able to see the infinitesimal face of this particle whose existence was, until then, only theoretical. Eureka and thus, the Higgs boson does exist. I am very happy about it and, at the same time, I don’t care. That we are now in front of the possible resolution of one of the numerous enigmas that Nature poses to us, certainly, that does not fail to be exciting for any spirit in search of truth. Scholars, poets, philosophers or simply curious, all have now and even more than yesterday, something to meditate, cogitate and dream about. The Higgs boson, baptized by I don’t know who the particle of God, would be the ultimate element constituting the matter, all the matter. The one that made the mountains, the forests, the water of the oceans and rivers, the flesh of the animals, from the bee to the humpback whale, including the thinking meat that we are, we humans. As René Barjavel nicely said in « La faim du tigre », everything that exists is ultimately nothing but a vacuum in motion, since between the nucleus of an atom and the elements that constitute it, there is strictly NOTHING.

This does not take away from the fact that, as many of us as we are, we are well aware that this whole of the universes from which we come is perfectly tangible and real and that indeed, this whole is palpable and manifests itself to us in a thousand ways. When the tectonic plates start to move and the earth shakes, the sea becomes furious and floods the shores, taking away houses, men, women and children and, in passing, nuclear power plants, with the consequences that we know. If a few cells in our body mutate, here or there, cancer kills us slowly. A moment of inattention at the wheel of a superb, very big and flashy car and here we are stuck in a pile of scrap metal, waiting for help. And if they delay, two adults and three children will be killed on the highway that goes — that for them went — from there to there. This is how men live, sang the poet; and their kisses, far away, follow them. Are there bosons in kisses? And in the words of poets? Science cannot, alas, answer these serious questions, any more than it can answer those related to the strange adventure of our species, which, according to some specialists, will not last much longer; the more or less definitive end of the ravages it continues to make around it being foreseen for a hundred years from now and, at the same time, obviously, the end of our reign.

Those who, today, persist in fighting, each with their own weapons, against the absurd and deadly slope on which we are inexorably sliding, will no longer be there — and neither will their children — to taste the delights of the end of the ignominy that will have brought us to this grandiose catastrophe; this could either cheer them up or, at worst, discourage them from any form of commitment in a fight which, if we observe it with lucidity, appears more and more as too unequal. We are obliged, are we not, to note that this sinister prospect is far from panicking our leaders, politicians and others, just as it does not prevent the brave ordinary citizens of our countries from continuing blissfully to go about their little business. Elsewhere, as we have seen and some of us have been dazzled by, huge crowds have gathered in Spain, Mexico and other countries, and we may see more and more of such tremendous demonstrations of anger, indignation and despair. But if we look at all this in a way that is not based on beautiful and praiseworthy emotions, linked, of course, to the hopes that we continue to place in human reason and in the radical changes that we advocate, we must have the courage to see that, in general, the old world is still far from its end. The few dozen billionaire fools who own and share almost everything the world has to offer are not going to be suddenly won over by grace, go down on their knees and ask forgiveness from the despoiled and oppressed peoples, and turn into heralds of degrowth, justice and the sharing of the wealth they possess. As for the practical means that are in our possession to try to thwart the universally dominant plan of death, it must be noted that they are far from being a match for the weapons of mass destruction that the owners of the world hold and in the handling of which they are masters. Almost everything that is printed, listened to and watched by millions of people is in their hands and in those of their affiliates, propaganda is in action everywhere; lies and manipulation of minds go hand in hand with the general numbing of consciences; from this point of view, everything is fine. And we, we think, we dream, we write, we meet people, we try to make pass this « something » which occupies us and mobilizes us in the margins of a world which, for the essential, is made without us, against us.

Beyond the identifiable causes and reasons that make the horror and absurdity of the time, one would come to think that perfectly uncontrollable and almost inhuman forces are at work. And that, in a thousand ways, they contribute to this maddening spiral that carries everything away in its inexpressible — and absolutely uncontrollable — movement. A bit like the movements of the atoms, about which Epicurus already spoke, which « rain » on the world and in the infinite Universe, at random and without goal, and which form the matter, and then, the formidable and so ephemeral adventure of the life.