BELGIUM IN THE MIRROR: THE QUESTION OF THE RESTITUTION OF AFRICAN CULTURAL GOODS 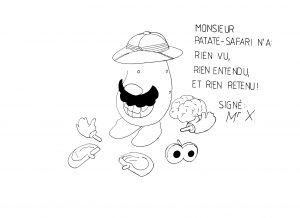 A few weeks before the reopening of the Royal Museum for Central Africa in Tervueren, mobilizations are organized for the restitution of objects looted during the colonial era and enshrined as works of art in European museums. The discussions are about objects, archives and human remains.

The Nigerian capital Abuja hosted a major pan-African reparations conference in 1993. This meeting resulted in a proclamation that places the issue of the restitution of cultural property looted during the colonial period within the framework of  » moral and material debts owed to the African peoples . The question of restitution appears to be a crucial issue in the broader question of reparations, aiming at the  » full payment of compensation in the form of capital transfer and debt cancellation, the return of looted property and traditional treasures (1) « .

Last spring, the investigative journalist Michel Bouffioux revealed in Paris Match the presence of 300 skulls, bones and fetuses at the Royal Belgian Institute of Natural Sciences, within the ULB. These skulls, mainly from the Congo, were acquired through the crimes committed by the Belgian soldier Emile Storms. A statue of this not very glorious character of the Belgian history is in the square of Meeus, near the place of Luxembourg. Among these skulls is that of Chief Lusinga, brought back to Belgium in 1884 as a trophy and still not returned to the Congo(2). According to Martin Van Der Elst, researcher at the Laboratoire d’Anthropologie Prospective of the UCL, the possession of these works and human remains, acquired as a result of colonial crimes by Belgium and with the knowledge of scientific institutions, can be qualified as concealment.

As Christophe Marchand, a lawyer specialized in criminal and international law, writes about the African goods stored in Belgian museums, the one who refrains from acting (in the sense of article 66 of the Belgian penal code) becomes an accomplice to an offence. Complaints could be filed and acted upon. However, beyond the legal questions, the issue is broader; as Achille Mbembe writes:  » For restitution to be genuine, it must be based on an equal recognition of the seriousness of the harm suffered and the wrongs inflicted. There is absolutely nothing to return (or to give back) where it is felt that no harm has been done; that nothing has been taken that required any permission whatsoever(3).  »

CHANGE EVERYTHING TO CHANGE NOTHING

The highly contested history of the Tervueren Museum seems to be swept away largely through communication and by involving young Afrodescendants in the renovation and reopening process. As Anne Wetsi Mpoma writes:  » The words decolonization and inclusion have replaced the words diversity and multiculturalism(4) ». While decolonization is proclaimed at every opportunity, decolonization of minds, arts, knowledge,… very few changes are made on the content of the museum, or only on the margin.

The demands and claims of the representatives of the diaspora were gradually dismissed as « too radical ». Another pretext for sidelining people who have been in dialogue with the museum for more than 10 years is to listen to Congolese living in the Congo, as if the opinions of experts in the diaspora were irrelevant.

In a carte blanche published on Sept. 25, 2018, in the newspaper Le Soir(5)In the first part of the conference, about thirty people, mostly from the African diaspora and from the artistic, academic and associative worlds, denounced the attitude of the Belgian authorities, a « war on terror ». Belgium is lagging behind on the restitution of colonial treasures « , especially in relation to the latest developments in France, Germany and Canada… If the government, through the voice of Didier Reynders and Alexandre de Croo, says it is open to discussions, concrete actions are still pending. The collective demanded, among other things, that the government remove from state ownership property known to have been acquired through looting, theft and murder, starting with the Storms collection; that justice be served and that financial and other reparations be guaranteed; and that an official apology be issued by the highest authorities of the Belgian state. For a few days, the theme of the restitution of African property was covered by the general media. It was the occasion to give to see and to read debates called contradictory very little constructive and where the paternalist and racist comments fused. Those in favour of order are being pushed around and intend to conduct the debates as they wish, i.e. among themselves.

The Brussels Parliament and Bamko Cran asbl organized on October 16, 2018 a day of debates entitled « Restitution of African cultural goods »: moral or legal issue? Among the conclusions: the announcement of the constitution of a group of experts, as well as a resolution, which should then be shared with the other Parliaments of the country. It will be a matter of proposing amendments to the law, and then moving towards concrete restitutions.

As with the issue of reparations, the actions of the Belgian state will be scrutinized to ensure that it is not fooled by complex mechanisms that mask a false reparation, as was the case with the friendship treaty between Libya and Italy in 2008. It provided for compensation from Italy to Libya for the colonial period. However, it is unfortunate that this move by Italy was guided by economic and political interests. An apology accompanied by reparations in the form of « tied » investments, contracts, control of natural resources and conditionalities such as the control of migratory flows…, amounts to imposing and perpetuating a neo-colonial relationship of domination.