ATTACKS ON HEARTS AND MINDS 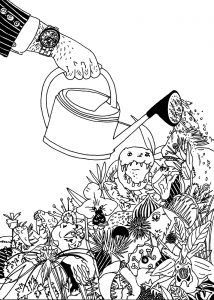 » We live in a rather unpleasant world, where not only people, but the established powers have an interest in communicating sad affects to us. Sadness, sad affects are all those that diminish our power to act. The established powers need our sadness to make us slaves. The tyrant, the priest, the soul-takers, need to persuade us that life is hard and heavy. The powers that be don’t need to repress us so much as to make us anxious… » Gilles Deleuze, 1977.

March 22. Nothing that happens to us today is a surprise. And probably nothing that will follow either. Beyond the sadness, rage and fear that overwhelm us, perhaps the worst thing is the feeling of helplessness that this kind of repeated drama provokes. Precisely because it was so predictable, because nothing is done to change the course of things, because in addition to the crazy people who get blown up in the middle of the crowd and are numerous enough for us not to be at the end of the horror, the crazy people who govern us don’t intend for a second to question their policies, to stop their wars and their innocent daily victims, which are quite convenient as long as they are far from us, invisible, without names and without faces. These pyromaniacs do not consider rethinking the social injustices in our societies. On the contrary, they enjoin us not to think, to act only on emotion and revenge, to continue the escalation until « war » is no longer a word used in a cookie cutter way but a reality that will have really spread everywhere and will have deeply transformed our societies.

March 24. For two days, the media flow has been continuous. I found myself connecting to it at the slightest sound of helicopters and police sirens. In doing so, I remembered the time of the killings in Walloon Brabant, in the early 1980s, and their psychological impact. I was a child and I was shocked, but not traumatized. It was another time: the Internet did not exist and televisions did not interrupt their programs to broadcast non-stop information. You had to wait until the end of the movie before getting a special flash. The killings were indiscriminate, unpredictable, close to home, but there was a way to put things into perspective. Today, the trauma of the attacks is largely amplified by the media treatment. To be informed implies to confront one’s brain to the permanent live, to the absence of hindsight and analysis, to sensationalism, to unverified information thrown without even using the conditional. Not to mention the under-mediatization of important events such as the scandalous agreement with Turkey (which de facto puts an end to the right of asylum and reinforces the posture of Europe as a besieged fortress), the implications of which have been largely overshadowed by the hunt for suspects in the Paris and Brussels attacks.

If we can’t turn off the sirens and helicopters, it has become a matter of mental health to at least extract ourselves from the continuous flow of news sites, TVs, social networks and their anxiety-inducing effects. The need for respite, distance, to feel good, to regain the ability to act and to do so, to see and talk to each other « in real life ».

April 2. Going to the Bourse for an anti-racist rally, one week after 400 soccer fans led by a few neo-Nazis paraded through the same place and on the same day that a far-right group announced a demonstration in Molenbeek. Learn that all demonstrations are forbidden today in the Brussels Region. To discover on the spot a police deployment largely more important than the sum of the potential demonstrators, the onlookers, the tourists and the people gathered in front of the spontaneous memorial in front of the steps of the Bourse. Seeing the president of the League of Human Rights being arrested just because he was there. That’s done.

Being filmed by plainclothes policemen. To be ordered to leave. To comply. Go to a nearby café, sit on the terrace, have a drink. Witnessing the sometimes violent arrests of dozens of people with peaceful behavior, not holding up any banners or chanting any slogans. That’s done.

Seeing the police surrounding the terrace of the café, while leaving the far-right activists gathered on the one of the Irish pub opposite alone. Take refuge inside the café. Seeing customers being checked for ID, some being taken into the restroom to be searched, and then almost all being handcuffed with collars and arrested. Then see police officers enter the café and arrest people sitting quietly drinking. To escape from all this as arbitrarily as others have been arrested… That’s done.

The next day, seeing the president of the League of Human Rights on the set of public service television, summoned to explain his presence at the Stock Exchange and being suspected of having orchestrated a « publicity stunt » by having himself arrested, by journalists saying nothing about the conditions of this arrest which nevertheless concerned dozens of other people. Two weeks later, to learn that the police commissioner responsible for this decision, and who has also distinguished himself on many other occasions for violence and mass arrests of « leftists », intends to file a complaint against the president of the League of Human Rights, guilty in his eyes of having publicly criticized his attitude. That’s done too.

What’s the next step?