AND IF WE STOP THE REGRESS? 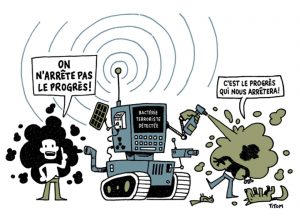 Each of us knows, having heard it many times, that progress cannot be stopped. This adage reflects, without a doubt, popular common sense. Either it expresses an amused admiration for an unexpected discovery, or it expresses the fatalism of those who have to deal with an unwanted technological innovation. Since the evolution of technologies is no longer unanimous, it is also used to disqualify any voice critical of questionable choices.

In the name of progress, it is appropriate to silence or minimize the possible ecological and social nuisances, to deny the attacks on human dignity and the threats to fundamental freedoms. In the name of progress, we should submit to an inescapable and necessarily beneficial technological evolution as long as the market supports it.

1. For the past ten years, nanotechnologies have been presented as one of the most promising paths for our future. Manipulating matter atom by atom and recreating the world around us from the atomic level would make it possible to improve many manufacturing processes and bring to market more efficient, more practical products using fewer raw materials. An example: clothes. If the label announces promising functions such as « self-cleaning », « antibacterial », « antifungal », it means that silver nanoparticles have been incorporated into the fabric. Nano-silver has undeniable antibacterial properties. The problem is that this virtue is accompanied by some annoying defects: silver nanoparticles are toxic to mammalian cells and germ cells; in the environment, they destroy denitrifying soil bacteria. What is true for silver nanoparticles is unfortunately also true for nanoparticles in general: due to their small size, they present a new toxicity:

In fact, it can be said that knowledge about the impact of nanomaterials on living organisms lags far behind their commercialization. In the name of progress, the 7th European Framework Program for Research 2007–2013 has allocated 7.5 billion euros to nanoscience and nanotechnology. 1% is devoted to safety, health and environmental aspects: there is no question of slowing down progress…

2. Since the beginning of 2014, the multinational Facebook has included egg freezing in the health insurance offered to its employees. The freezing procedure is covered up to $20,000, with an additional $500 per year for storage. This way, executives can postpone their maternity and not jeopardize their career. Neo-feminists can rejoice: women are taking power over their life schedule. Above all, they allow companies to avoid compromising their productivity gains. This technological advance in the process of artificialization of the living and submission to economic interests will be appreciated as it should be.

3. In July 2015, an agreement was signed between Proximus, ULB, VUB and the Chinese phone giant Huawei to install a 5G-enabled « campus of the future » on the sites of the two Brussels universities.

5G is a telecommunications technology that promises speeds of around 10 billion bits per second, nearly 100 times what 4G currently offers. According to its proponents, 5G is expected to support a 1000-fold increase in data traffic per phone by 2020. Note that in 2014, the European Commission released 700 million euros for the development of 5G.

5G’s primary objective is to support the Internet of Things: cars, fridges, elevators, watches, health bracelets, pacemakers, … a jungle of interconnected devices for convenience and security. According to experts’ forecasts, by 2020 there will be between 50 and 200 billion connected objects on the planet … According to experts, 5G deployment will require significant network densification with more relay antennas and more power. The exposure limits to electromagnetic fields will have to be re-evaluated upwards … whereas those currently in force must be considered as clearly too high in view of the nuisance caused by the pulsed microwaves of mobile telephony. It is reasonable to think that electromagnetic smog could lead to an explosion of cases of electro-hypersensitivity, which already affect 3 to 5% of Europeans.

But, in addition, it is important to question the security of the system. The Internet Organised Crime Threat Assessment 2014, published by Europol (the European police officer), addresses the topic of death by Internet of Things. The 4th chapter, entitled « The Future is Already Here », issues a warning that will worry even the most serene:  » With the proliferation of Internet-connected objects, we can expect an increasing number of attacks against existing and emerging infrastructures, as well as new forms of blackmail and extortion. Among the risks, there is of course the theft of data but also injuries or even death. »

At a time of increasing terrorist acts, it is legitimate to think that the Internet of Things will not improve our security but rather contribute to compromise it. At the signing of the 5G agreement in Brussels, the Region’s Minister-President, Rudi Vervoort, hailed it as a  » beautiful challenge for Brussels that will see the immediate future of technological progress take shape. »

Technological progress perhaps, but progress for humanity is questionable to say the least. Questioning the societal impact of technological innovation seems to me to be more and more essential since it is likely to threaten not only our environment and our living conditions but also our fundamental values and our dignity as human beings.

The « technologist » ideology that confuses technological innovation with progress deserves to be questioned as to its foundations. The fact that it deeply permeates the Western world is also reflected in the vocabulary. How can we explain the non-existence of the word regress, when the verb regress and the noun regression exist, if not by the refusal to consider a sustainable evolution other than according to a trajectory of continuous progression, that is to say of progress. There is some reason to think that this trajectory can today make us regress durably since it leads us to submit to dehumanizing and totalitarian technologies.

If we cannot stop progress, we could at least try to stop regress.

Paul Lannoye President of the Grappe