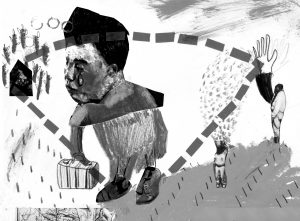 The competition for migrants employed in agriculture continues to be in full swing, with a new development in recent years: the rise of Temporary Work Companies (ETT). The migratory journey now takes place in a triangular relationship between the country of origin, the host country and the country of « provision », as shown by the flow linking Ecuador, Spain and France. Triangular also, the system of legal relations between ETT, employees and employers.

Directive 96/71 EC of the European Parliament and of the Council aims to avoid distortions of competition in a sector that has seen the number of postings to France increase from 1443 in 2000 to 35,000 in 2009. But in reality it frames the creation of a pool of temporary workers with diminished rights. In agriculture, the replacement of Moroccan and Tunisian labor employed under OFII contracts(1) by Latin American temporary workers is underway. This new workforce relieves the user company of the constraints of the OFII contract, as precarious as it may be: there is no beginning and end of contract to honor.

Created in 2000 by three young entrepreneurs to offer seasonal labor in agriculture in France, Murcia-based ETT Terra Fecundis employed nearly 2,000 workers in agricultural businesses in the Bouches du Rhone in 2012. But it also intervenes in the Gard, the Vaucluse, the Landes… This temporary labour is invoiced at around 15 euros to the user companies. The latter have thus adopted a new strategy of outsourcing human resources management. Although apparently more expensive than OFII contracts or seasonal workers, this temporary labor force is in fact more profitable because the volume of hours worked is strictly based on production needs. A simple phone call and the worker deemed not productive enough is replaced. The workforce becomes disposable through outsourcing its management.

After having developed its activity of secondment of temporary workers in France, Italy and Portugal, Terra Fecundis is now looking to prospect in Belgium, Holland and Great Britain. It has also diversified its activities since 2004 by positioning itself in the trans-port sector (Groupe Jumaf Méditerranée) and in real estate (Terra Housing Méditerranée). Claiming to be an « ethical business », it nevertheless evolves in a context of deregulation of labor laws.

According to the 2011 report of the European Affairs Committee on the posting of workers, the coexistence of several rules and labor laws on the same territory generates social dumping. How can we fight against irregularities when we know that only one third of the initial mandatory declarations are effective? Just as the OFII contracts filled positions that were in fact permanent, these temporary workers from Latin America and elsewhere fill positions that are normally permanent. Discrimination, abuse, pay gaps, inferior social security benefits, nothing has really changed, even though the employment system for agricultural contractors has evolved. Ecuadorian employees pay 300 euros to ETT when they return to Spain, and 20 euros for sending money back home. The health rights are acquired in Spain, the medical follow-up is not ensured in France, nor the work protections. Most of the time, only half of the hours worked appear on the pay slip in France, while the totality is supplied in Spain. Over a year ago, an Ecuadorian worker died of a heart attack in a greenhouse. He was working in nearly 50 degree heat. A trial should take place, but when?

From this point of view, agriculture still appears as a social laboratory in the deregulation of rights. Does the so-called « intensive » organic farming escape this logic?